Wobbly the Wizard wanted to be among like-minded people. 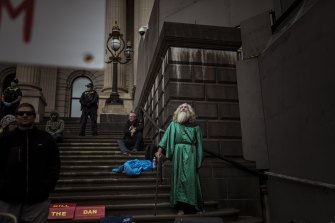 Wobbly the Wizard was among the protesters. Credit:Chris Hopkins

Adorned in a green robe and followed by his faithful black Labrador, the self-proclaimed Kilsyth mystic said what he loved about the protest was the vibe.

Early on Tuesday, the Spring Street protest did have a positive vibe, with an impromptu party and dancing the Nutbush. People shared coffees.

But as the day went on, the demonstrations took a different turn.

Mentions of violence started to appear in speeches. Demonstrators threatened and maligned police. They berated veteran 7 News reporter Nick McCallum, ejecting him from the crowd as he attempted to do short interviews.

“Shame on you,” they chanted at him as they chased him up Spring Street.

The night before, demonstrators excitedly welcomed a life-sized gallows pulled behind a 4WD, the grim reaper looming over a small cross at the bottom emblazed with the word treason. 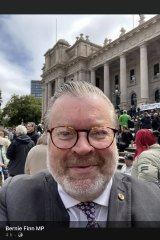 Bernie Finn posted this to Facebook on Tuesday afternoon.Credit:Facebook

“I brought a set of gallows to Parliament House to remind the traitors what happens when you commit treason in Australia,” the owner said.

The number of protesters gathered at the steps of Parliament to oppose the Andrews government’s proposed pandemic laws continued to grow throughout the day, swelling to 500. The demonstrators vowed to protest at the site until the bill was dropped.

Most of the protesters wanted to have their voices heard. Many felt comfort and excitement that their concerns were shared by the others.

Despite endorsements from Liberal MPs Bernie Finn, Craig Ondarchie and Nick Wakeling, the rhetoric of protesters on Spring Street on Tuesday was hardening into something more violent.

“A selfie on the steps of Parliament today with a couple of thousand of my closest friends,” Mr Finn told Facebook just after 1pm.

In a city that was shocked a couple of months ago when protesters swarmed the Shrine of Remembrance, the anger is perhaps unsurprising. But the vehemence with which some expressed their feelings was still confronting.

They said they were the victims of vaccine segregation, and that authorities lied about the science to keep Victorians compliant and inoculated.

Yelling into a microphone, one woman issued a threat directly to the Premier.

“I look forward to the day I get to see you dance on the end of a rope,” she said, to enthusiastic cheers.

“You need to be put in a noose and hung out the front of this place,” another said.

They flew the Australian red ensign upside down, an internationally recognised symbol indicating distress at sea.

Rarely did speakers address the substance of changes to the proposed legislation that had been put forward by the government overnight.

A man wearing a cotton hazmat suit threatened a Nine security guard while a journalist went to air, his suit covered in too many conspiracy theories to name.