Tunnelling workers on the $6.7 billion West Gate Tunnel will earn more than $300,000 a year after the project’s builders cut a pay deal with one of Victoria’s powerful building unions.

The workplace agreement covering tunnel workers ends an industrial relations stand-off of more than three years between the project’s builders and the Australian Workers Union. 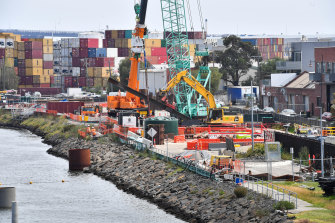 It will set a standard for the industry on future transport projects in Victoria, including the $16 billion North East Link.

Construction workers in Victoria are among the highest-paid blue-collar workers in the country. This has come about because the state has historically been home to the nation’s strongest building unions.

The Fair Work Commission approved the West Gate Tunnel deal between the AWU and John Holland last week. It is set to apply to up to 250 tunnel workers.

An entry-level tunneller working an average six-day working week – common on big projects – would be paid an annual salary of $230,000, once travel and site allowances are included. This excludes superannuation. 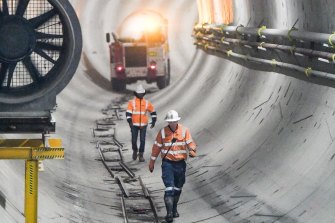 Workers in the Metro Tunnel.Credit:Joe Armao

A more experienced tunneller operating the large tunnel-boring machines would be paid about $320,000 for working 12-hour shifts over seven-day blocks, which alternate between night and day rosters.

The rates and conditions are broadly comparable with those agreed to on Melbourne’s Metro Tunnel and the Cross River Rail project in Sydney.

There was a wealth of research showing the negative psycho-social impacts that long overnight shift work could have on workers, he said.

“It’s by far the most hazardous construction work going around, which is why they get paid what they get paid,” Mr Davis said.

“They’re working weekends and public holidays. And once the tunnel-boring machines start operating, it’s going to be continuous shift work.”

In signing the agreement, the AWU abandoned its demand for workers to be paid double time for night shifts instead of time-and-a-half.

Two sources close to the negotiations said builders on the two consortiums bidding for the North East Link have told the union their demand would be met on the next toll road, set to be built by 2027.

About 80 tunnelling workers currently on the project will now be directly hired by the project’s builders, John Holland and CPB Contractors, rather than a subcontractor.

It comes as the West Gate Tunnel’s joint building venture – which is trying to quit the project due to a crisis over the project’s PFAS contamination in the soil – is failing to broker a workplace agreement for civil surface work.

This agreement would cover up to 350 workers who work outside of the tunnel, carrying out works on the West Gate Freeway, M80 Ring Road and building an elevated road over Footscray Road in West Melbourne.

Talks between the builders, the Construction, Forestry, Maritime, Mining and Energy Union and the AWU have been at a stalemate for months, with union and industry sources saying it may not ever be signed.

The relationship between the builders and unions soured in 2018 when the consortium threatened to take an agreement to the Fair Work Commission for approval, without the consent of the unions.

The unions alleged the move was designed to slash pay and working conditions and threatened to get a Federal Court injunction, which resulted in the consortium backing down.

A government spokeswoman said the West Gate Tunnel was a fixed-price contract, meaning any added costs relating to wages would be absorbed by the builders.

“These rates are comparable to other projects – and pay agreements reached between the contractor and their workforce do not mean extra costs for taxpayers,” she said.

“Projects like the West Gate Tunnel and North East Link are essential transport projects that employ thousands of workers and contribute to Victoria’s growth at a time when the economic recovery from COVID are more important than ever.”

But shadow treasurer Louise Staley said the West Gate Tunnel worker salaries were incredibly large – even for the building industry – and this deal would set a precedent for future transport projects that would ultimately be paid for by the taxpayer.

She said firefighters, police officers and paramedics carried out risky work, but their salaries did not come close to the transport project’s workers.

“The union has held to ransom the fact that this project is so derailed and they’ve extracted a well above market price for their workforce,” she said.

gate, reach, tunnel, West, Workers
You may also like: