Some local footy grand finals turned into muddy scraps on Saturday as dumping rain hit Melbourne, but fans can expect the weather to clear somewhat for the AFL decider next weekend.

Mark Anolak, senior weather forecaster at the Bureau of Meteorology, said there were some thunderstorms among the heavy rain band which crossed the city on Saturday afternoon. 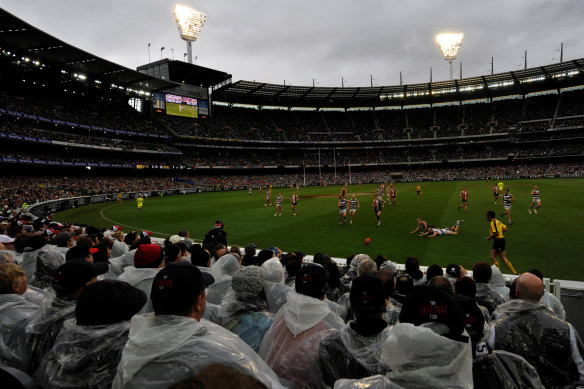 Footy fans in ponchos at the 2009 grand final between Geelong and St Kilda.Credit:Justin McManus

“We had very heavy falls across the metropolitan area at times today. Some of those did contain thunderstorms – so there were a couple of rumbles of thunder around the place,” Anolak said.

He said next weekend’s AFL grand final at the MCG – the first back in the city since COVID-19 lockdowns forced the match to be moved elsewhere – was likely to be played in better conditions, albeit with similarly cool temperatures.

“I think we will be in a clearing trend by next weekend,” he said.

“At this stage it looks like we will be in for showers clearing – just the chance of a shower.”

Next Saturday is forecast to hit 18ºC, according to the weather bureau.

As for the AFL grand final parade, which will float down the Yarra in a revamped format this year, Anolak said fans wanting to attend should be wary of more rain.

“We do have a system moving through mid-week. Hopefully, it will clear out by the end of the week, but at this stage I’d keep an eye on the weather, to be honest. There might be the odd shower around,” he said.

Victorians will enjoy a four-day weekend from Thursday as a national day of mourning following the death of Queen Elizabeth II is held.

A statewide public holiday to mark the eve of the AFL grand final will then take place on Friday, as has been the case since 2015, despite some businesses urging Premier Daniel Andrews to reconsider his decision at the time.

Light showers may hit Melbourne on the sombre day, with a forecast top of 18ºC.

As for Sunday, Anolak said locals can expect more “showers increasing from the late morning and becoming wet in the afternoon”, but they may not be as heavy as Saturday’s downpours.