Wetherspoons will hike food prices across its pubs

Wetherspoons will hike food prices by 40p when lockdown ends due to the Government’s ‘Monty Python’ VAT rule, the pub chain has blasted.

Hot food served in pubs and restaurants has seen a 15 per cent drop – from  20 per cent to five per cent – in VAT to encourage people to visit during the pandemic.

But this is set to be phased out, with food prices rising back to pre-Covid levels in September – after lockdown is lifted on ‘Freedom Day’ on July 19.

Tim Martin’s pub chain said the plans shows ‘unfairness’ compared with retail, where there is largely no VAT.

The change will see the cost of a large breakfast rise from £6.10 to around £6.50, while a chicken tikka masala will increase from £9.05 to approximately £9.45 when restrictions lift. 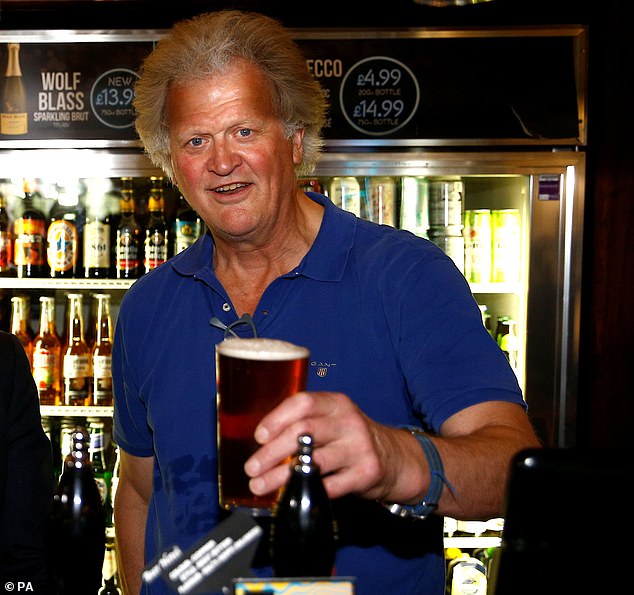 Wetherspoons (its boss Tim Martin, pictured) will hike food prices by 40p when lockdown ends due to the Government’s ‘Monty Python’ VAT rule, the pub chain has blasted 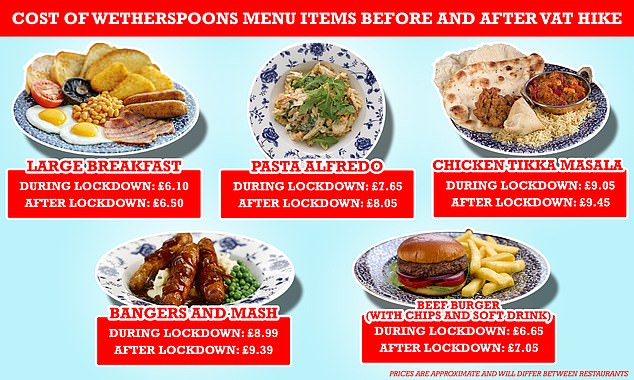 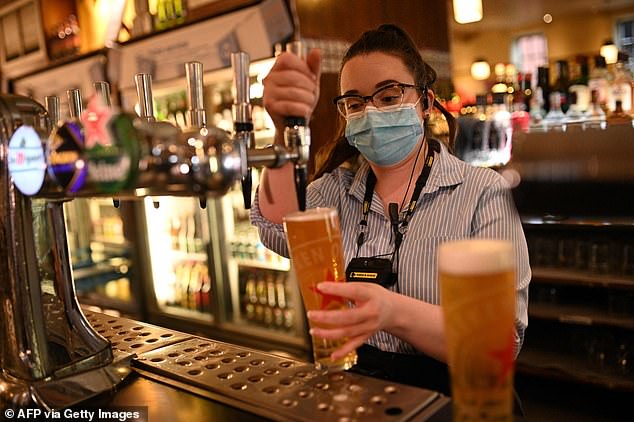 Hot food served in pubs and restaurants has seen a 15 per cent drop – from 20 per cent to five per cent – in VAT due to the pandemic. Pictured: Bar staff in a Wetherspoons pub

‘The interim rise to VAT of 12 per cent, in September 2021, will result in Wetherspoon having to increase food prices by around 40 pence per meal,’ a spokesperson said.

Prices are approximate and will differ between restaurants.

‘For many years, UK governments have therefore behaved like Monty Python’s Dennis Moore – who robbed the poor (in this case pubs and restaurants) to help the rich (supermarkets).

It came as Wetherspoons said it expects to tumble to a loss for the current financial year after sales since reopening slipped below pre-pandemic levels.

The pub giant has now reopened 850 of its estate of 860 sites, with the remaining outlets mainly at airports.

It said like-for-like sales from May 17, when hospitality venues were able to reopen indoors, to July 4 declined by 14.6 per cent against the same period last year.

The chain told shareholders that this sales decline has accelerated while the Euro 2020 tournament has been on.

Wetherspoons said sales since June 10 – when the football tournament started, have fallen by more than a fifth – with the group’s pubs not televising games apart from a limited number of exceptions.

The group also revealed that like-for-like bar and food sales from April 12 to May 17, when sites were only able to reopen outside, declined by 49 per cent against the same period in 2019.

The company added: ‘Trading has been helped by the addition of outside seating.

‘Landlords, landowners, and local and licensing authorities have been extremely flexible in accommodating extra outside space – which has helped Wetherspoon and the licensed trade generally.’

Wetherspoons said it has opened two new pubs in the past six months and now has an investment pipeline which includes 18 new sites.

Chairman and founder Mr Martin said: ‘The company continues to expect to make a loss for the year ending July 25.

‘In a trading update of January 19, the company’s principal “scenario” estimated sales in the financial year starting July 26 to be in line with financial year 2019, which remains our current best estimate, on the basis that restrictions are ended, as the Government currently intends.’

Food, hike, PR, Wetherspoons, will
You may also like: