Follow
Home » World News » What happened in the Glendale shooting and where is Paradise Pastry bakery?

A MAN was shot and stabbed during an altercation inside Paradise Pastry bakery in Glendale, California.

Cops from the Glendale Police Department responded to the incident on Sunday, September 19, 2021.

What happened in the Glendale shooting?

An argument between two men resulted in one of them being shot and stabbed, according to the police.

It is currently unknown what causes the confrontation at the Glendale bakery.

Cops who arrived at the scene found the victim on the street suffering from multiple gunshot and stab wounds, reports KTLA.

The man was taken to a local hospital and was in surgery on Sunday evening.

His condition is currently unknown.

Police said one man is in custody.

"There is another party involved that’s also being spoken with but it’s very early in the investigation so we’re not sure exactly what happened. But there is no outstanding suspects in the case," told Fox Sgt. Christian Hauptmann.

Police are reviewing surveillance footage and interviewing witnesses to find out what happened.

Where is the Paradise Pastry bakery in Glendale?

The attack took place at Paradise Pastry bakery in the 1800 block of West Glenoaks Boulevard.

"Just after 2p.m., there’s a lot of people out and about, so I’d say that, yeah, that’s something that's uncommon in that part of our town and really, Glendale as a whole," Hauptmann said.

According to NBC, the bakery stated through their social media that the incident that occurred had nothing to do with their establishment, their customers, nor their staff. 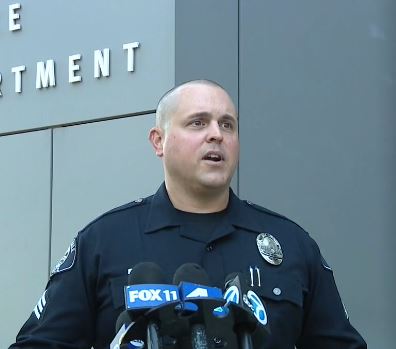 Glendale, happened, in, the, what
You may also like: