Follow
Home » World News » What is the Tomb of the Unknown Soldier?

What is the Tomb of the Unknown Soldier?

THE Tomb of the Unknown Soldier is at Arlington National Cemetery and stands over a hill overlooking the nation’s capital.

Congress approved the tomb to be built at the New Memorial Amphitheater in 1921 shortly after World War I. 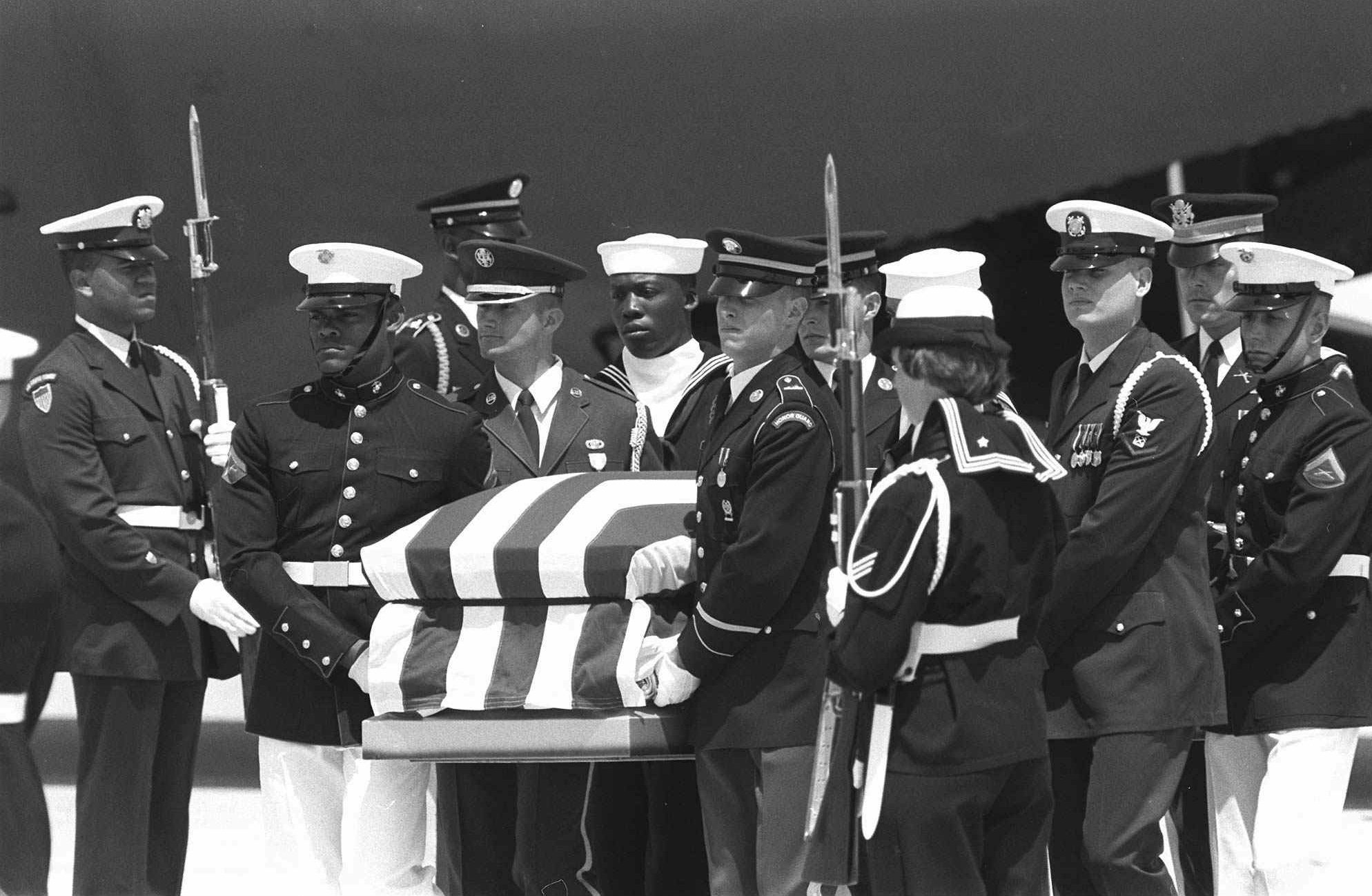 What is the Tomb?

The Tomb of the Unknown Soldier is a white marble sarcophagus with three Greek figures inscribed in it to represent Valor, Peace, and Victory.

There are also six wreaths, three sculpted on each side, that represent the six major campaigns of World War I.

The back of the tomb has an inscription that reads: Here rests in honored glory an American soldier known but to God.

Is anyone buried there?

Yes, there are a few soldiers buried inside the sarcophagus.

Four tombs were exhumed from four American World War I cemeteries in France and Army Sgt. Edward F. Younger chose the Unknown Soldier of World War I to lie in it.

The Unknown Soldier was awarded the National Order of the Legion of Honor, the highest French order for military and civil merit for his service in the war.

Additionally, two other soldiers are buried there as well.

President Dwight D. Eisenhower signed a bill to select and pay tribute to the unknowns of World War II and Korea in 1956.

The selection ceremony and interment of those unknown soldiers took place in 1958.

There was an unknown soldier from Vietnam buried there as well in 1984 but was exhumed four years later.

His remains were returned to his family and the government decided that the spot Blassie once held will remain empty.

The crypt cover was replaced with a new inscription that reads: Honoring and Keeping Faith with America's Missing Servicemen, 1958-1975.

Does anyone guard the tomb?

The tomb is guarded by volunteers who form part of the third US Infantry Regiment, also known as "The Old Guard." 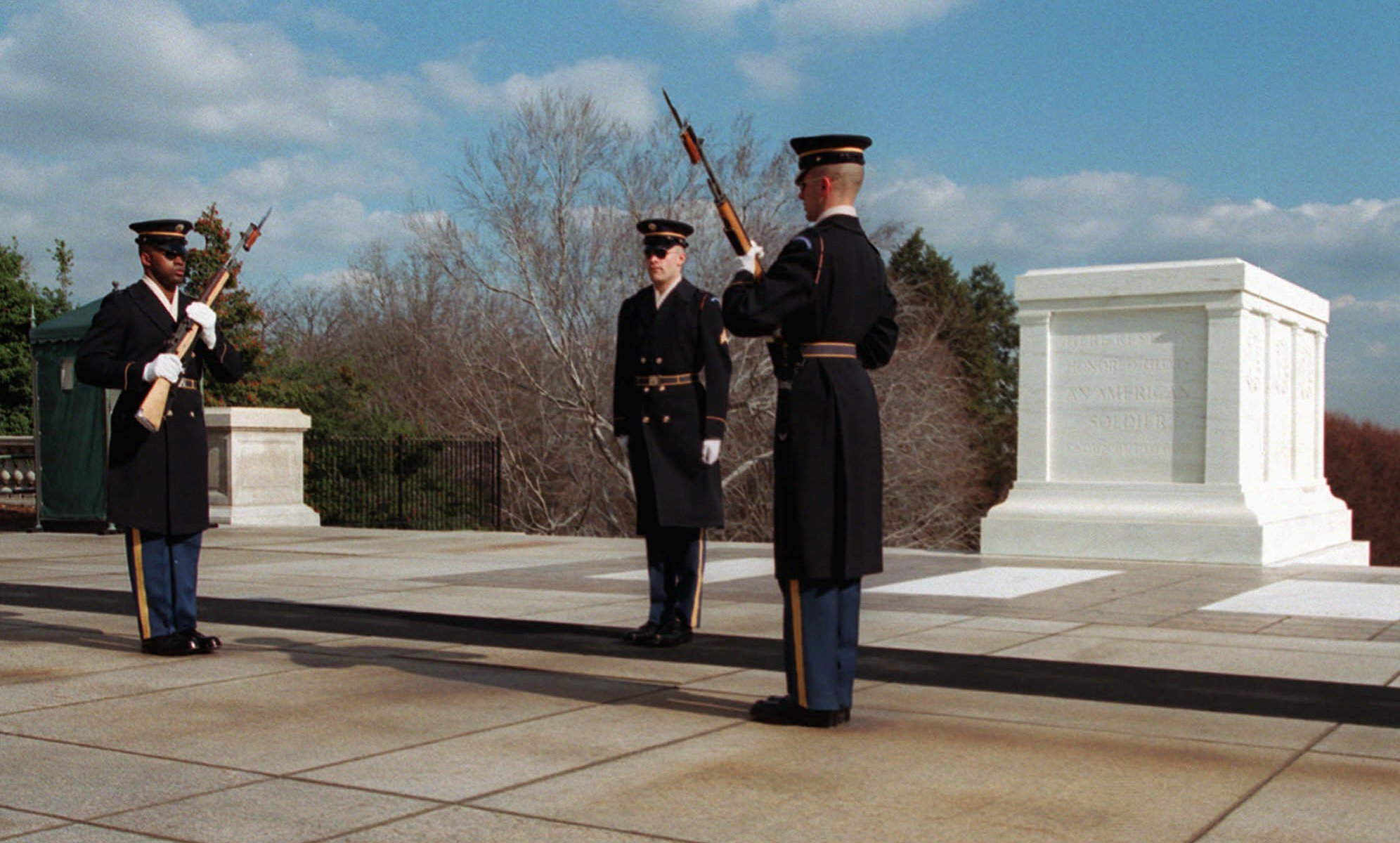 To obtain the title of Tomb Guard is extremely rare and honorable.

They work in 24-hour shifts and when they are not walking or guarding, they are living in the quarters beneath it.

Veterans Day became a holiday in America beginning in May of 1938.

The holiday, originally known as Armistice Day, was dedicated initially to world peace and World War I soldiers.

However, Congress was urged by veteran associations to drop the Armistice from its name and change it to “veterans” after World War II required the greatest mobilization of soldiers, airmen, and Marines.

The legislation became official on June 1, 1954, and November 11th became a day to honor American veterans of all wars.

In 2021, the theme of the Veterans Day poster is the Tomb of the Unknown Soldier. The work, entitled Honoring All Who Served, features a Tomb Guard in front of the Tomb, with the sun rising in the background.

The artist, Matt Tavares, gave a statement to explain his work.

"In this poster, a Tomb Guard carries out his responsibilities with unwavering dedication, alone on the quiet plaza at dawn. There have been Tomb Guards of all races, genders, religion and creeds, so I wanted to keep the identity of this Tomb Guard ambiguous," he said.

"By placing the Tomb Guard off to the side I hoped to remind the viewer to look past the sentinel and focus on the tomb itself and the unknown soldiers who died in service to our nation.”

There will be parades in New York and Kansas on November 11, 2021 to honor the holiday.

is, of, the, tomb, unknow, what
You may also like: