EXCLUSIVE: Ex-defence chief Lord West demands inquiry into ‘what the bloody hell is going on’ after ex-RAF Top Guns were revealed to be making a killing training China’s fighter pilots

A furious former defence chief is today demanding to know ‘what the bloody hell is going on’ after it was revealed ex-RAF pilots were making a financial killing passing on their skills to Chinese fighter aces.

Admiral Lord Alan West has demanded an official inquiry into worrying reports Beijing had recruited as many as 30 former British fighter pilots to pass on their expertise on ways to defeat western warplanes.

Chinese military officials have been accused of luring the retired fast-jet experts with hefty annual salaries of around £240,000 to pass on secret tactics, which prompted a ‘threat alert’ from the British Government.

The news has left MPs worried, with the heads of two of Parliament’s most influential committees today demanding Defence Secretary Ben Wallace reveals just how much the Ministry of Defence (MoD) knew about the scandal.

Former security minister Lord West has now ramped up the pressure on Whitehall by calling for an official probe into the situation.

The 74-year-old Cold War commander and former head of the Royal Navy told MailOnline: ‘China is a threat to our nation and British fighter pilots should just not be going out there to train the Chinese. 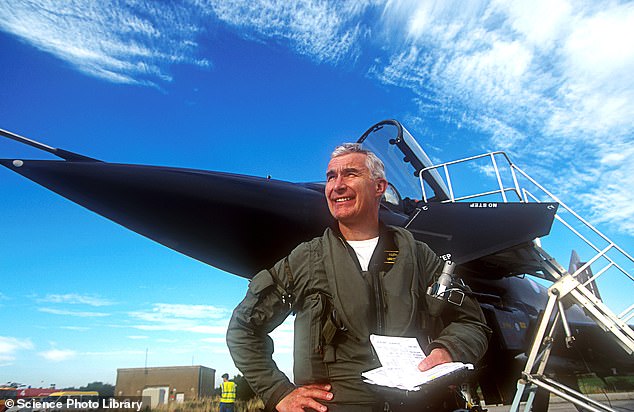 ‘We have trained these pilots at immense cost – it probably costs British taxpayers £4.5 million for each pilot – and I’m not at all happy that they are passing on all this training on to the Chinese.

‘We really do need to look at this and see what the bloody hell is going on. We need to close this loophole. We need to get to the bottom of what is going on and we need to put a stop to it.’

In the 292-word document, the heads of the committees, Tobias Ellwood and Alicia Kearns, demanded to know whether the retired RAF pilots had breached the Official Secrets Act by carrying out the training.

And they urged the MoD to lay out what action military chiefs are doing to ‘address the threat posed by having former serving personnel training adversary nations’.

‘We are concerned by these reports and wish to gain a greater understanding of the scale of the matter and the nature of the former personnel involved,’ Mr Ellwood and Ms Kearns wrote. 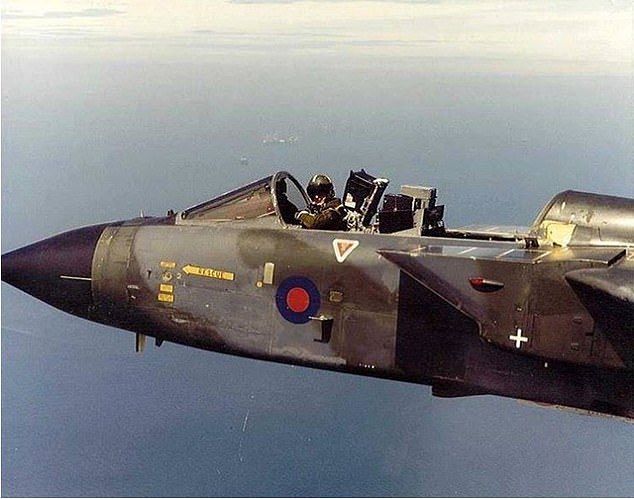 The comments come just days after it was revealed that among the Brits in China training Beijing’s fighter pilots was former RAF ace, Keith Hartley.

Mr Hartley, formerly know by the military call-sign ‘Hooligan’, has been at the centre of Beijing’s recruitment drive in his role as Chief Operating Officer at a firm called the Test Flying Academy of South Africa (TFASA).

He has operated there and in China where, according to a TFASA company profile he was responsible for ‘teaching, contracts and developing business’.

Based at Oudtshoorn, TFASA was named and shamed by an intelligence briefing by UK spooks for recruiting British, Australian, Canadian and New Zealand pilots to work for China.

They are being lured by Beijing with promises of eye-watering salaries, school fees, luxury apartments and unlimited airline tickets to and from the repressive country.

As TFASA’s Chief Operating Officer, Mr Hartley is understood to have played a highly significant role in the recruitment of Royal Air Force and Royal Navy pilots.

TFASA has headhunted former officers who played key roles in some of the UK’s most sensitive defence projects, including development of the £2.8 billion F-35B Lightning stealth jet and Britain’s £6.4 billion aircraft carriers, HMS Queen Elizabeth and HMS Prince of Wales.

Earlier this month, UK officials indicated the Chinese had been unsuccessful in their attempts to lure anyone with expertise in Britain’s state-of-the-art F-35B Lightning jet.

But research by the Daily Mail has revealed this is not entirely the case, with Royal Navy pilot Stephen Crockatt – who was ‘UK Team Lead’ on the F-35B Integrated Test Force between 2017-2019, had spent time working with the Chinese.

On his LinkedIn profile he provides more details of the role, saying he ‘led the ITF developmental team to deliver the evidence required to support the UK F-35 operating capability and ensure support to U.S./UK interoperability goals’. He also boasts that he became TFASA’s ‘Deputy Chief Test Pilot Instructor’.

Mr Crockatt worked in Beijing, in exchange for a large cheque. ‘Yes, I did go to China with TFASA, a lot of people did,’ he admitted. ‘But I cannot fly an F-35. I work in flight test training.

‘I told the Chinese how to set up a flight test school, making sure people are there on time and the safety is in place. The MoD are fully aware. I did nothing tactical for TFASA — but they got involved with other things with the Chinese.’

Other pilots, speaking on condition of anonymity, have suggested the training of PLA pilots by British officers has been going on far longer, perhaps for as long as 20 years.

One said: ‘It would make your eyes water, it’s been happening for that long, clandestinely. At first I thought it was a two-way thing, with us getting as much information from the Chinese as we were passing to them. But I don’t think so any more. It is just about money and there is nothing in place to stop it.’

Despite mounting concerns in Whitehall, the Government has been powerless to end the training scheme because no laws had been broken.

However, British security agencies have not been sitting idly by and have instead launched counter-intelligence operation, it has been reported.

In an astounding double-bluff, spooks are said to have approached a small group of the Western pilots, asking them to ‘wear two hats’ and hoover up sensitive intelligence on China’s military tech, tactics and capabilities. 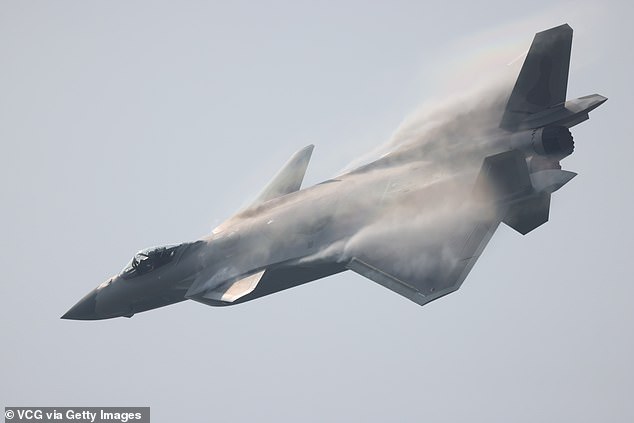 RAF pilots who help China are enticed with large salaries and offers to fly their fifth-generation fighter jet the J-20, pictured

It’s understood the pilots, who were not trained intelligence officers and from a mix of nationalities, agreed to the covert operation.

The undercover operatives were given their own handlers and tasked with taking a mental note of China’s fleet of next-generation fighter jets.

One source told the Daily Express that the UK had ‘played China at its own game’ – and won. ‘This was a rather unprecedented situation,’ he told the paper, confirming all the assets had now left China and the operation had ended.

The biggest fear is that British pilots could unwittingly be sharing secrets that could potentially put lives at risk.

It’s been a concern that has been on the in-tray of Britain’s intelligence services for three years.

TFASA was formed in 2003 with the South African government’s political backing to ‘pursue friendship and cooperation with China’. 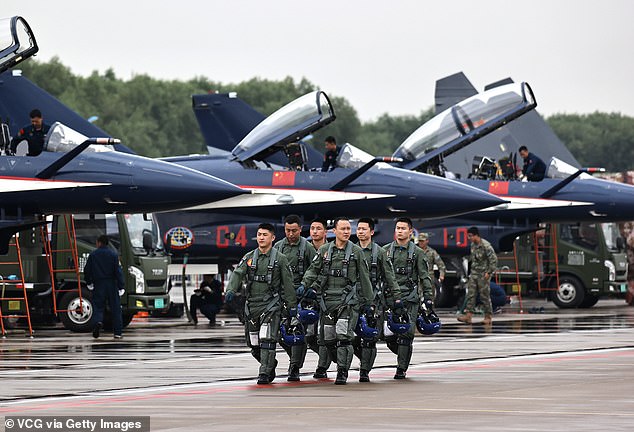 This year China has enlisted as many as 24 RAF and Royal Navy officers, again on promises of enormous wages and lengthy contracts. Pictured are Chinese fighter pilots

Details of TFASA’s management structure suggest Mr Hartley has been responsible for the academy’s ‘Military Operational Flight Training’ for both fixed wing and rotary aircraft.

Meanwhile, a company profile from 2019 said: ‘Keith has carried out complete weapons system programmes from initial design to flight testing and introduction to service. Keith has been a senior member of TFASA staff since 2005 and has been engaged in long and short-course teaching of test pilots in a variety of civil and military programmes’.

These officers were approached as China prepared to launch its latest aircraft carrier, the 984ft-long Fujian.

China already has the world’s biggest navy, of at least 360 vessels, but is playing catch up with the United States on carriers. The US Navy has 11 and China has three.