Where parking wardens have hit UK drivers with the most tickets

Streets of shame: Map reveals where parking wardens have hit drivers with the most tickets – with motorists in one Hackney road racking up £2m in fines

Britain’s most-fined streets are bringing in an excess of a more than £10 million in fines every year for local councils.

Mare Street in Hackney has earned the unfortunate title of Britain’s worst street for parking after drivers were hit with a staggering 32,347 fines over a two-year period to July 2022 – amounting to 44 tickets every day, totalling £2.26million.

Motorists aross the UK were not spared either, with Lisburn Road in Belfast and George Street in Edinburgh also targeted in the ticketing blitz.

Lisburn Road racked up 2,508 parking fines in the reporting window, while Madeira Drive in Brighton & Hove was hit with 3,402. 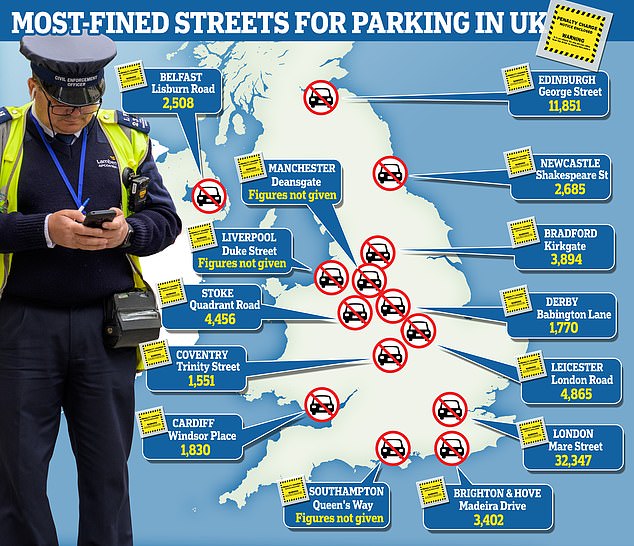 The limited parking options in London Road in Leicester caught out 4,865 drivers, while 4,456 were fined on Quadrant Road in Stoke.

The data was compiled by AppyParking+, whose CEO Dan Hubert told The Sun: ‘Parking has become an increasingly stressful and complicated process for drivers – not knowing where is best for them to park, how long they can stay for, and also being charged significant fees for the privilege to park.

‘This has become a significant problem for drivers in London, with certain areas racking up millions of pounds in fines each year, all at the expense of residents and visitors to the capital… amid the ongoing cost of living crisis, parking is one area where millions are getting wasted due to a lack of clarity and understanding of restrictions.

‘It is also an issue of wasting time and fuel whilst searching for somewhere they know they can legally park – meaning more emissions and more pollution of our streets all because we don’t know where is right to park.’ 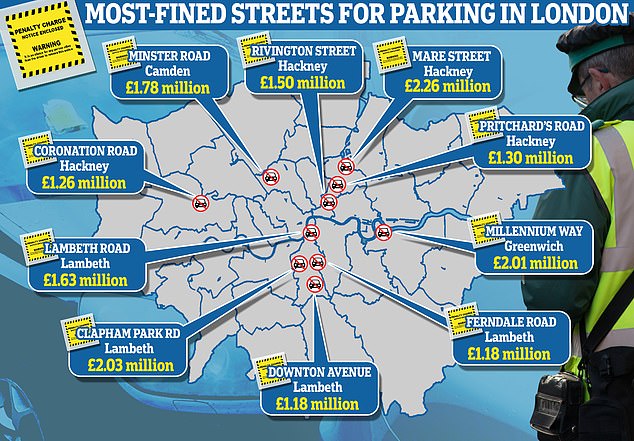 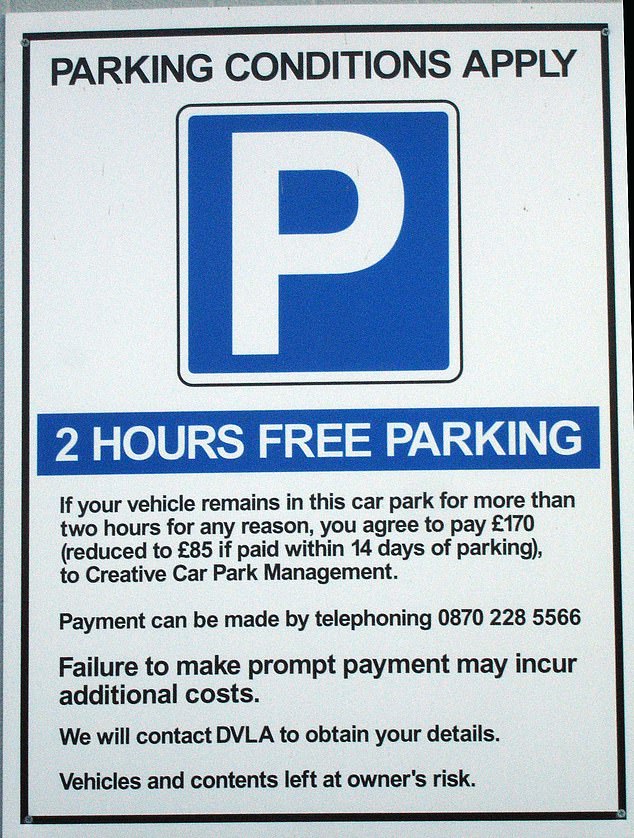 Britain’s most-fined streets are bringing in excess of a whopping £10 million worth of fines each year for money-hungry councils. Pictured: Signage at a private car park

Seven of the top firms generated a combined turnover of more than £650million and raked in more than £50million profit over the past three years despite lockdowns.

A record 30,000 motorists a day are receiving tickets thanks to the operation of draconian regimes in private car parks, hospitals, garage forecourts, fast-food restaurants and supermarkets.

The number of tickets issued on private land has soared by 50 per cent in a year, meaning a motorist was caught out every three seconds from April to June.

Just last week, an entire row of motorists in Watford were hit with penalty notices on Boxing Day after mistakenly thinking they could park on a street for free due to the bank holiday.

The mayor said anyone can appeal the citation if ‘they feel unfairly treated’. 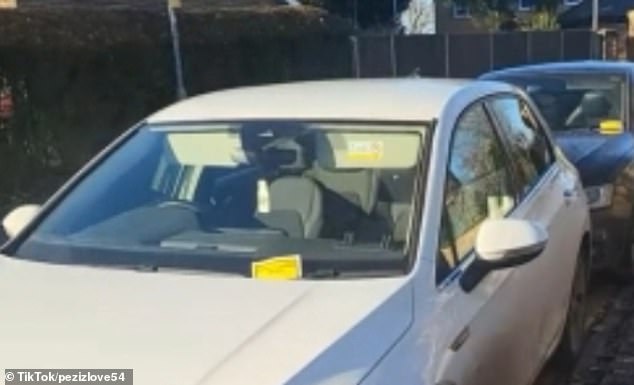 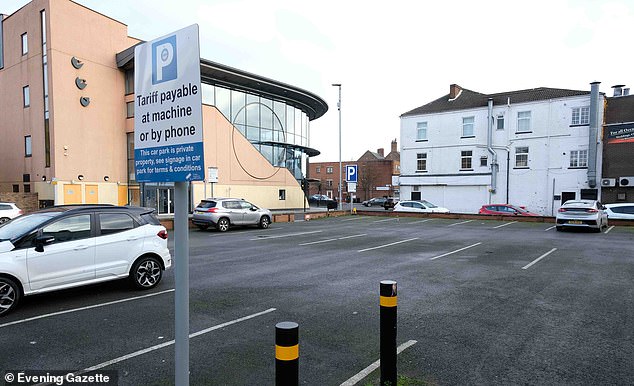 In another incident which sparked outrage, a mother was fined within two minutes of parking her Motability van as she waited to pick her disabled daughter up from school.

At 3pm every day, Michelle Thomas, 42, is required to park the van in a disabled bay outside her six-year-old daughter Annabelle’s school in Wanstead, east London, and take her to the toilet, transfer her into the van and bring her home.

She is permitted to park for two hours but on Wednesday September 14, Redbridge Council handed the mother a £60 parking fine just minutes after she left the van to tend to Annabelle who has Type 1 spinal muscular atrophy.

Ms Thomas, from Barkingside, Redbridge, told MailOnline how there used to be a ‘lovely traffic warden’ before who understood and had sympathy for Annabelle’s condition and the struggle of getting her out of the ramped vehicle.

Over the Christmas period, a scrooge traffic warden also targeted a Santa who was trying to bring holiday joy to children in the Worcester city centre. 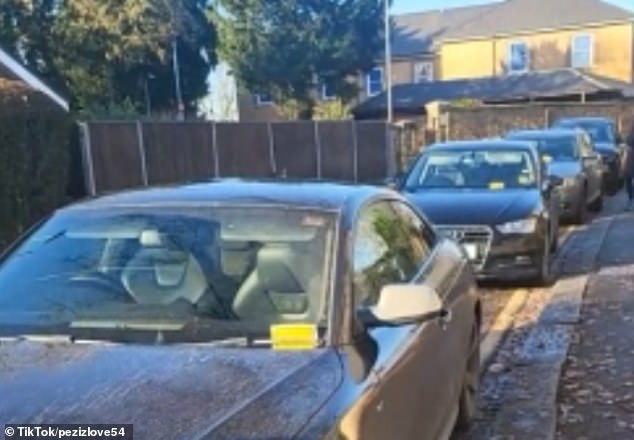 He was hit with the fixed penalty notice on a Saturday as he handed out gifts to children and raised much needed funds for the New Hope Worcester Children’s Charity.

Data also reveals the 10 police forces which have handed out the most speeding tickets in 2022.

But the nation’s worst drivers overall, based on the number of driving licence points received, are located in Bradford.

The majority of the tickets – 220,545 – were captured by the county’s 402 fixed speeding cameras. Only 3,615 tickets were actually given by officers. 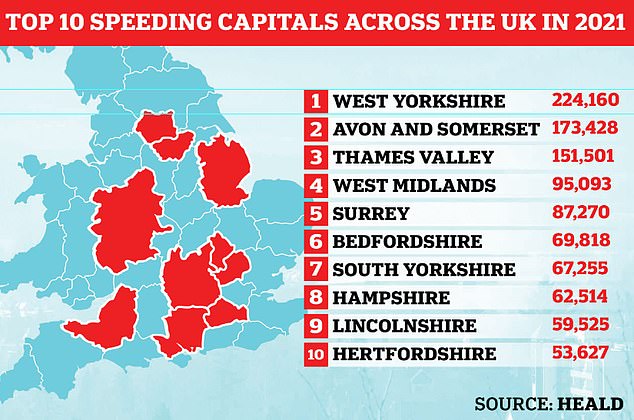 Analysts have determined the top 10 speeding capitals in the UK, with West Yorkshire ranking the worst for reckless drivers. Regional police constabularies in the northern county handed out the largest number of camera and officer-issued speeding tickets last year

Within the county, the Bradford district had the highest number of ‘bad drivers’ in the region – based on the number of licence points received.

In the city, license points averaged at 643.3 per 1,000 drivers, Heald reported. Researchers argued this is two-and-a-half times the average.

MailOnline previously revealed that Bradford was home to a zebra crossing which might be the most dangerous in Britain.

Police reported that excessive speed was a contributory factor in 19 per cent of deaths. 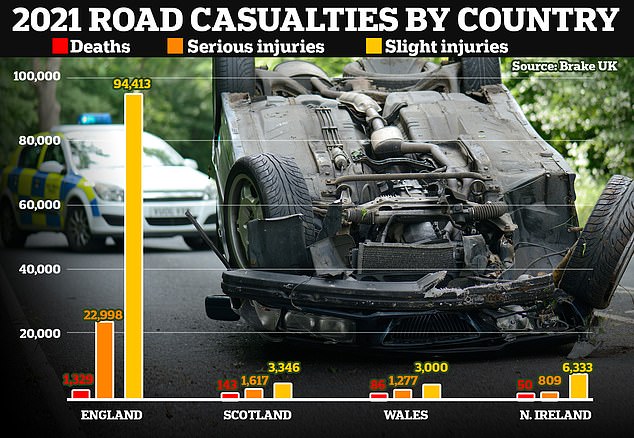 Where am I most likely to get a speeding citation in the UK?

Some 23 police constabularies provided Heald Ltd with speeding citation data under the Freedom of Information Act.

The constabularies are ranked from having issued the most to least citations last year, based on the reported data.