Tedros Adhanom Ghebreyesus, the head of the World Health Organization, said Wednesday that his uncle had been ‘murdered’ by Eritrean troops in Ethiopia’s war-torn northern Tigray region.

Tedros held a press conference with the UN correspondents’ association on Wednesday in which he told reporters: ‘I was informed that my uncle was murdered by the Eritrean army.

‘I spoke to my mother and she was really devastated, because he was the youngest from their family and he was almost the same age as me, a young uncle. So I was not in good shape.

‘He was not alone. In the village, when they killed him in his home, from the same village more than 50 people were killed. Just arbitrary.’ 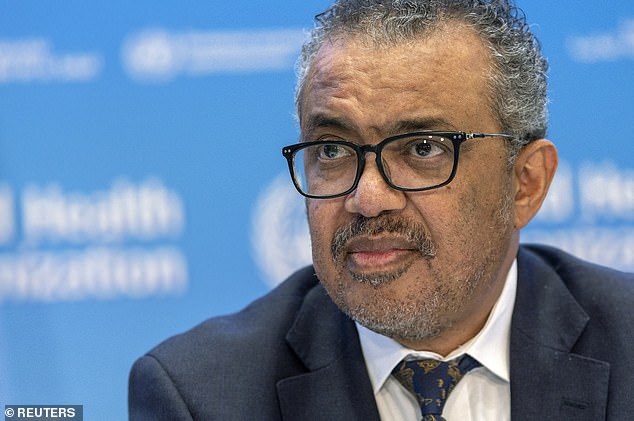 Tedros Adhanom Ghebreyesus, the head of the World Health Organization, said Wednesday that his uncle had been ‘murdered’ by Eritrean troops in Ethiopia’s war-torn northern Tigray region 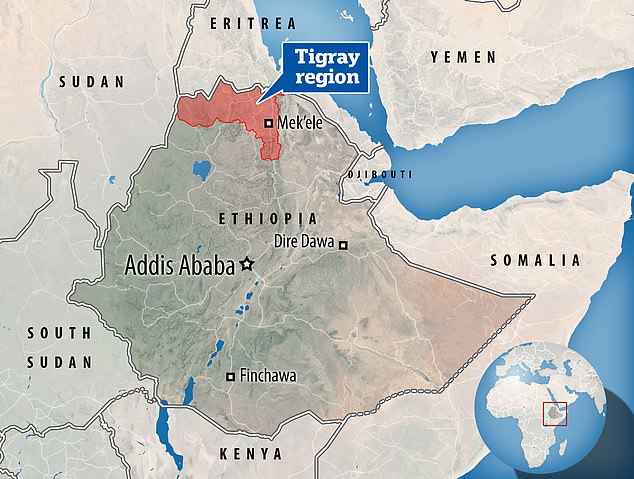 The conflict caused an untold number of deaths, forced more than two million people from their homes and drove hundreds of thousands to the brink of famine.

But the ceasefire makes no mention of the presence on Ethiopian soil or any possible withdrawal of Eritrean troops, who have backed Ethiopian Prime Minister Abiy Ahmed’s forces and been accused of atrocities.

Tedros hails from Tigray, and the former Ethiopian health and foreign minister has repeatedly called for peace and for unfettered aid access to the region.

‘I hope the peace agreement will hold and this madness would stop,’ the WHO chief told reporters today.

Tedros, 57, said he was glad he went ahead with the press conference. 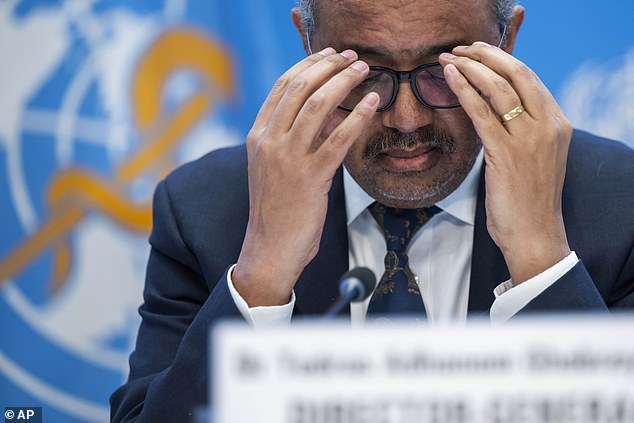 Tedros Adhanom Ghebreyesus, Director General of the World Health Organization (WHO), gestures as he speaks to journalists, Wednesday, Dec. 14, 2022 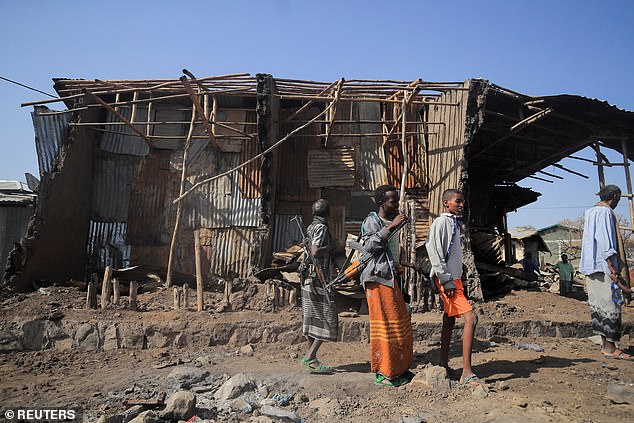 Residents and militias stand next to houses destroyed by an airstrike during the fight between the Ethiopian National Defence Forces (ENDF) and the Tigray People’s Liberation Front (TPLF) forces in Kasagita town, Afar region, Ethiopia, February 25, 2022 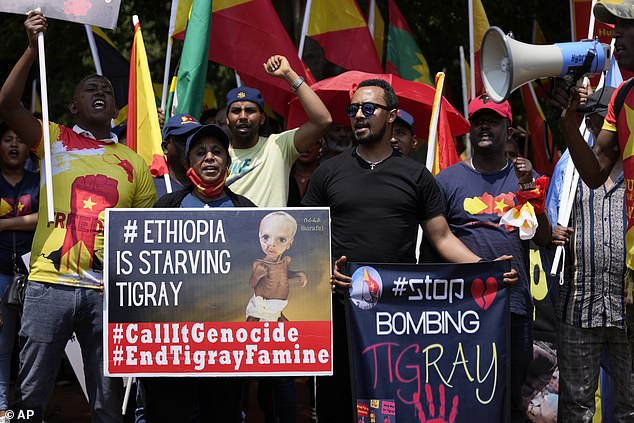 Members of the Tigrayan community protest against the conflict between Ethiopia and Tigray rebels in Ethiopia’s northern Tigray region in Pretoria, South Africa on Oct. 12, 2022

Desperate peace talks aimed at ending two years of brutal war between the Ethiopian army and forces from the country’s northern region of Tigray resulted in a ceasefire in November.

The conflict, which began in November 2020 and has been described by the White House as one of the worst humanitarian crises in the world, has left hundreds of thousands in famine and displaced millions from their homes.

The conflict between the Ethiopian federal government and people in the Tigray region stemmed from grievances dating back to a period during which the Tigray People’s Liberation Front (TPLF), an ethno-political group, held considerable sway as part of Ethiopia’s ruling coalition.

The TPLF was instrumental in helping to overthrow the Derg – a ruthless Marxist military dictatorship which killed tens of thousands of its own people – in 1991 and subsequently formed a coalition government (EPRDF) made up of four political parties representing different ethnic groups in Ethiopia.

This system was praised for its attempts to share power among various ethnic groups, but critics said the decision to formally split the country into several ethnic regions only led to greater divisions.

Since that coalition lost power at the national level in 2018 amid a wave of protests, the TPLF, still powerful in the north, fell out with the new federal government led by Prime Minister Abiy Ahmed.

The government accused the TPLF of seeking to restore its national dominance, while the TPLF has accused the Abiy government of oppressing Tigrayans and trying to centralise power. 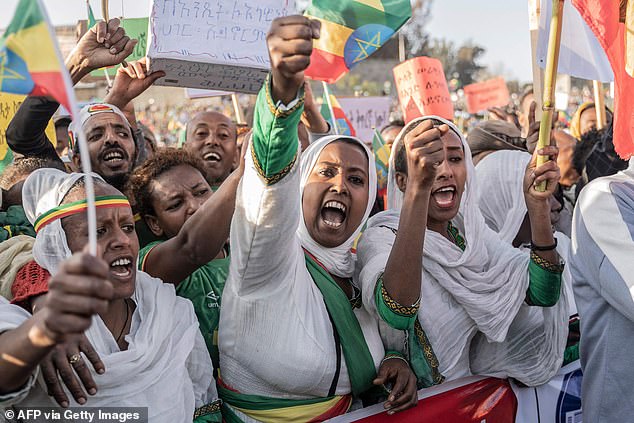 People gather in Addis Ababa, Ethiopia, on October 22, 2022 during a demonstration in support of Ethiopia armed forces 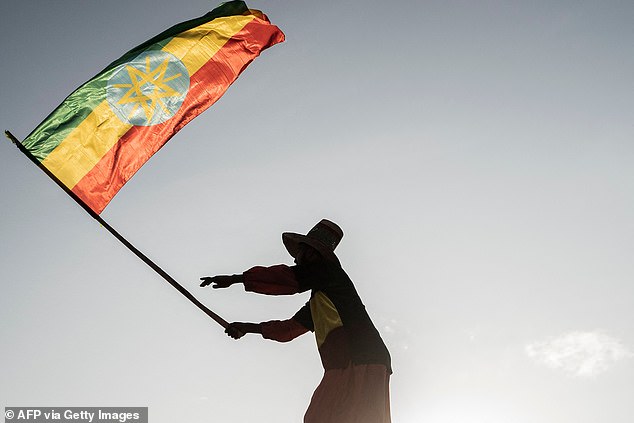 A man waves an Ethiopian flag as he join others gathering in Addis Ababa, Ethiopia, on October 22, 2022 during a demonstration in support of Ethiopia armed forces

Each side denies the other’s accusations, but their fighting brought utter chaos to the region and has plunged huge swathes of the population into famine and poverty.

There have also been widespread reports of soldiers on both sides committing heinous human rights abuses.

Abiy won the 2019 Nobel Peace Prize for his ‘efforts to achieve peace and international cooperation’ after he played a key role in bringing an end to a 20-year conflict between Ethiopia and Eritrea stemming from a border war in 1998.

His peacemaking efforts led to the signing of an historic peace deal between the two countries which opened borders.

But his reputation as a peacemaker quickly deteriorated when he ordered a blockade of Tigray in June 2021, which severed Internet connections and phone lines, closed banks and prevented essential food and medicine from entering the region.