Prophet Muhammad, from the hadiths of al-Tirmidhi

A mosque is not just a place of worship for a Muslim. It’s our heart and soul.

It’s a place we go to seek comfort and thank God for blessings. It’s a place the community gathers in to meet, greet, rejoice and comfort one another in good times and bad. It’s the basic community centre. We also use it to conduct weddings, funerals and celebrate births. 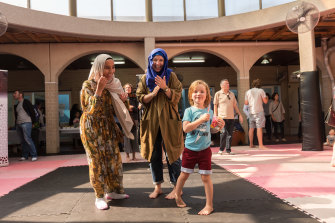 A mosque can also be a place of reflection for an individual on his or her connection with God. As Muslims we don’t believe that we need an intermediary to speak to God – we can do it anywhere – but for all Muslims the mosque is the house of God and anyone is welcome irrespective of faith, ethnicity or status.

The Islamic Council of Victoria’s Mosque Open Day project, launched in 2017, has grown into an annual event that many look forward to with great anticipation. The concept of “open doors, open hearts and open minds” was what this event was built on.

This was the baby project I started in 2017 when I was council president. Muslims like to celebrate and share and all of the mosque communities were very open to the idea.

In past years, thousands have flocked to a local mosque not only to get to know their Muslim neighbours but also to learn about the Islamic faith and diverse Muslim cultures.

The Victorian Muslim community is a multicultural microcosm within the larger Victorian multicultural community, with over 100 different ethnic groups and over 200,000 Muslims who call Victoria home.

All mosques taking part have developed COVID Safety Plans for this event.

We want the Victorian community to look beyond portrayals of Muslims and build dialogue and friendships while sharing mutual respect and understanding.

As we approach the second anniversary of the Christchurch massacre, we reflect on the progress that has been made to prevent something like that ever happening again. Victorian Mosque Open Day is an opportunity for all people of good will to come together and break down the barriers that divide us.

Mohamed Mohideen is vice-president of the Islamic Council of Victoria. Open Mosque Day is on Sunday, March 14. For further information visit icv.org.au.

began, I, mos, open, Victorian, Why
You may also like: