Why the queue to get home to Australia isn’t moving

There are still 34,000 Australians stranded overseas, 8000 more than September 2020 when Prime Minister Scott Morrison “would hope” that the government could get “as many people home, if not all of them, by Christmas”.

In September last year, international weekly flight caps rose to 6000 arrivals then 7000 before being halved due to COVID-19 outbreaks in January. The caps, set by national cabinet, are based on hotel quarantine capacity. They were raised recently but will be lowered from 6070 to 3035 weekly international flight arrivals by July 14.

So if 6000 people are coming home each week, why is the total not receding?

Up to 41,000 Australian citizens and 6000 visa holders leave each month, thus swelling the queue of people trying to return. The figures prompted Queensland Deputy Premier Steven Miles to say: “It turns out the only thing that’s required to get a permit from the federal government to leave the country is proof you have a meeting in another country.”

Stranded Australians the Herald and The Age spoke to say the reduced cap, announced on Friday to minimise Delta variant COVID-19 cases overwhelming hotel quarantine, is “mean-spirited blame-shifting” and may push people off flights they’ve booked to relocate home in a few months.

NSW Premier Gladys Berejiklian resisted lowering the caps but was overruled by Labor premiers, saying her “heart goes out to thousands of Australians who have to wait longer to come home”.

Tanya Tintner, an Australian citizen living in Canada, has made two trips to Australia since the pandemic began to help her mother, aged 94.

“The amount of mean-spirited blame-shifting going on in Australia is truly a sight to behold.”

Most Australians overseas face a months-long operation to pack up their lives and come home but two weeks’ notice that flight caps are reducing is not enough, said Jann George, whose family is moving home from the Netherlands.

“(They) already sold their apartment and have nowhere to live after early August, they are shipping possessions back to Australia, and have not seen family since 2018,” Ms George said. “Why was no consideration given to those already booked on flights?”

Jason Nitz arrived from the US three days ago and is in quarantine in Sydney ahead of his wife and son, who plan to join him in five weeks after they’ve packed up their home in Denver, Colorado.

“We have sold our cars, ended the lease on our house, and have our dog booked on a flight to Melbourne,” Mr Nitz said. “Whether my wife and son will make their flight is now up in the air … we expect when the caps are officially worked out they’ll be bumped or the flight cancelled.

“They will be homeless in a few weeks so it couldn’t have come at a worse time. We started planning the move back in February so we could cover all bases.” 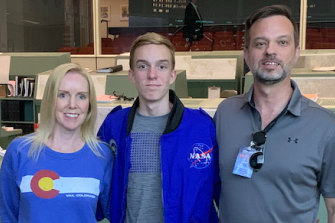 Jason Nitz with his son Harrison and wife Julie.

Australia was one of the first countries to close its borders in March 2020, excluding everyone except returning citizens, residents and people granted exemptions, including on compassionate grounds or for being a celebrity, a sportsperson, a contract worker and later a New Zealand resident.

The federal government’s recent budget put $180m towards government-facilitated flights to bring people home but travellers still pay for their ticket plus $3000 quarantine. Stranded Australians told the Herald and The Age repatriation flights don’t have an ordered queue and seats sell out in minutes.

“There will be a decrease in commercial arrivals but an increase in what are called facilitated arrivals to Howard Springs in the Northern Territory,” Mr Hunt said. “Some of those flights have been under-subscribed in recent weeks so there is that capacity to bring additional Australians home via Howard Springs.”

Howard Springs in Darwin is the destination for most repatriation flights and has expanded from a capacity of 800 people to 2000.

The Department of Foreign Affairs and Trade said it has helped 48,700 Australians return since the start of the pandemic, including more than 21,000 people on 142 government-facilitated flights.

“The number of Australians registered changes frequently according to people’s circumstances,” a DFAT spokesperson said.

There were about one million Australians living overseas before the coronavirus pandemic began.