A heartbroken wife has relived the horrific moment she saw her Australian husband plummet to his death from a clifftop and how she cradled him in her lap as he died.

Emma Heritage said she watched helplessly as Daniel Heritage plunged onto the rocks below as they climbed Cascade Mountain in the Canadian Rockies.

Her 28-year-old husband was ahead of her after they had scaled five sections of the steep cliff face of the Mother’s Day Buttress last October.

Daniel had gasped as he reached the plateau and shouted down his last words to her: ‘Phew, that was a little harder than I expected’.

Suddenly a jumble of ropes appeared, falling towards her before he re-appeared, tumbling to his death.

‘Without any sound, I watched a large amount of rope drop back towards my end of the system, she revealed. ‘I remember calling out “Hey, what’s going on up there?”

‘My stomach dropped as I saw Daniel rolling on his back, at great speed towards the edge that I had last seen him.’ 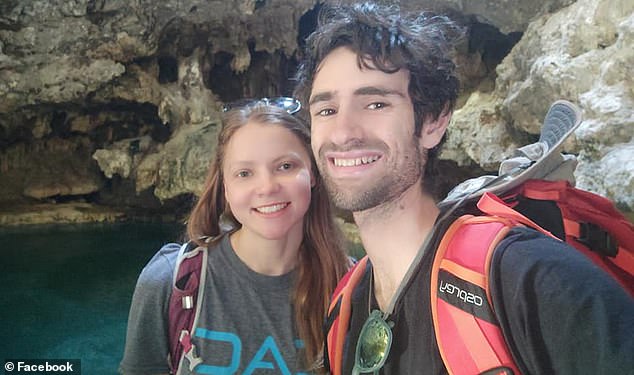 Emma Heritage (pictured, left) said her ‘stomach dropped’ when she saw her husband Daniel Heritage (pictured, right) roll down a cliff before he landed near her as the pair attempted to climb the Mother’s Day Buttress cliff face in the Canadian Rockies last October

‘Maybe there was a loose rock. Maybe he simply slipped,’ she told climbing.com.  She recalled seeing ‘a large amount of rope’ falling towards her.

‘His body continued to roll and took flight off the edge of the steep corner. He continued to fall, tumbling down a series of ledges.

‘As soon as Daniel landed I knew there wasn’t much I could do.’

Despite his headgear, he sustained devastating head injuries and she spoke tenderly to him, telling him God would welcome him with open arms as she cradled him.

He then died in her embrace with ‘his eyes glazing over’ while looking around him at the mountains he loved, said Emma.

Rescue teams arrived 90 minutes later and they prised her from the rock face after assessing her husband.

She said her ‘heart ripped right out of my chest’ as crews pulled her into a helicopter away from her fallen partner.

After they were both hoisted off the mountain, she had one final opportunity to hold him again as he lay dead. 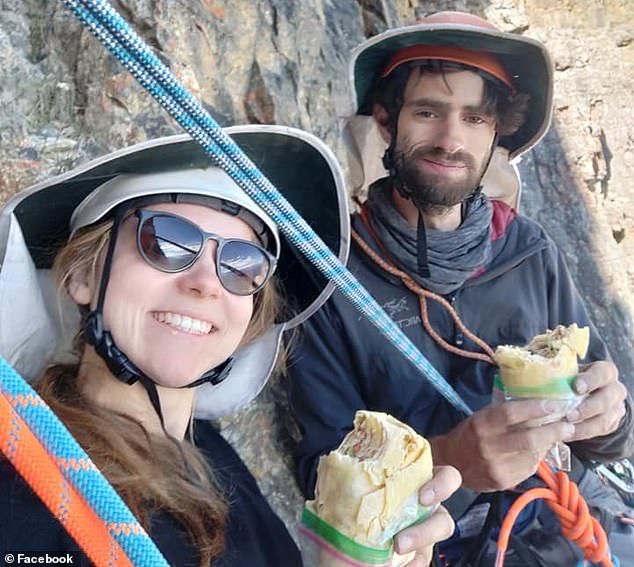 Mr Heritage took the lead while she followed behind as they scaled five sections or pitches of the rock face (pictured, the couple having lunch during a climb) 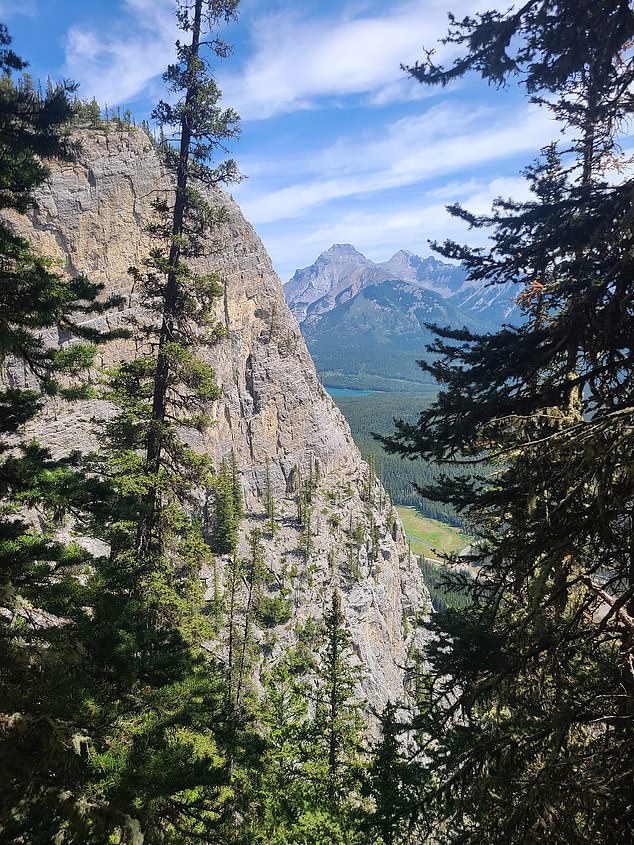 Mr Heritage told her before they started the climb on the tragic day he was hopeful the pair would enjoy more memories of conquering rock faces together (pictured, a cliff at the Mother’s Day Buttress area in the Canadian Rockies)

The pair had ventured onto the formidable eight-pitch vertical route on Cascade Mountain in Banff National Park on October 5, 2022 in what was a ‘beautiful sunny’ day.

Mr Heritage told her before they started the climb he was hopeful the pair would enjoy more memories of conquering rock faces together.

‘As we were [preparing], I had a sudden realisation. “Hun,” I said, “I just realised this might be our last climb for summer!”,’ she told climbing.com.

She was worried as his mum was arriving in a few days which meant they wouldn’t be able to do as much climbing, with the summer coming to an end.

But she said he assured her they would have more opportunities before the season ended.

Mr Heritage took the lead while she followed behind as they scaled five sections or pitches of the rock face. 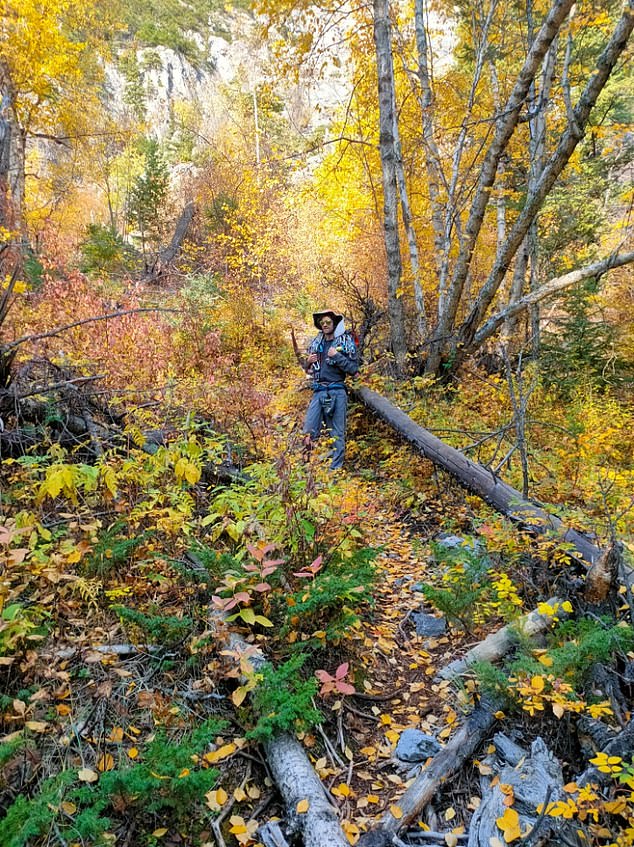 The pair had recently celebrated their four-year wedding anniversary and had been hiking, camping and climbing across the Rockies since March last year (pictured, Mr Heritage on the approach to the Mother’s Day Buttress) 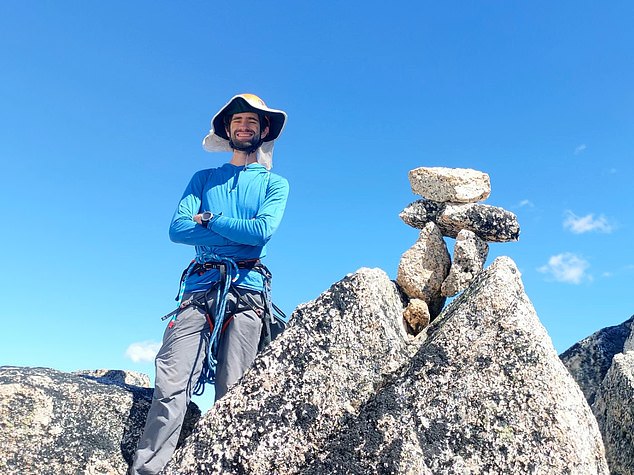 Despite the horrific ordeal Ms Heritage said she was eternally grateful to have known him (pictured, her husband)

The experienced climbers used bolts and pitons as they scaled the large sections of the route, along with ropes to secure themselves on the side of the steep cliff.

She said her husband got into trouble after they had ascended the fifth section.

Mr Heritage took on a steep corner of the track before disappearing out of his partner’s sight as he moved up and his wife stayed below.

She waited for 10 to 15 minutes for him to tell her it was safe to follow him up as she took in the sights around her – but never imagined what happened next.

The devastated wife said she believed her partner did not secure himself above the corner he had passed as it was easier terrain. 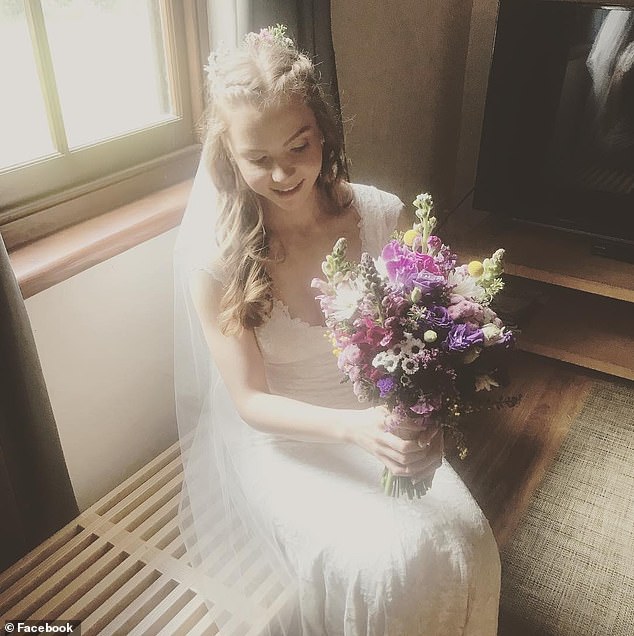 The devastated wife said she believed her partner did not secure himself above the corner he had passed as it was easier terrain (pictured, Ms Heritage on her wedding day) 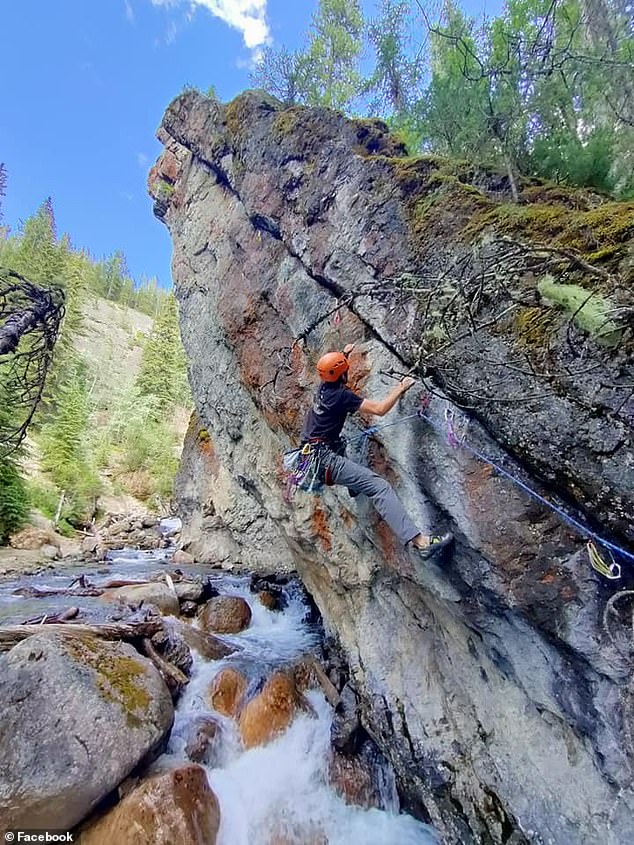 Emma Heritage plans to scatter some of thw ashes of her husband (pictured, scaling rocks in the Canadian Rockies) on Cerro Fitz Roy in Patagonia which he had dreamed of visiting

Despite the horrific ordeal Ms Heritage said she was eternally grateful to have known him.

The pair had recently celebrated their four-year wedding anniversary and had been hiking, camping and climbing across the Rockies since March last year.

Ms Heritage plans to scatter some of her husband’s ashes on Cerro Fitz Roy in Patagonia – a place he had dreamed of visiting before his 30th birthday.