London: It was a show of unity so poignant, it was at times almost unbearable to watch. Two brothers, walking side by side for their grandmother, putting behind them their differences but most significantly, the trauma they experienced when, almost 25 years ago to the day, they were made to walk behind their mother’s coffin along almost this exact same route.

Yesterday was about the late Queen, of course. The King’s Guard put in a stellar turn bidding farewell to their old boss as she left Buckingham Palace for the final time, and the Imperial State Crown resting on her coffin glittered magnificently in the unexpectedly warm September sunshine. 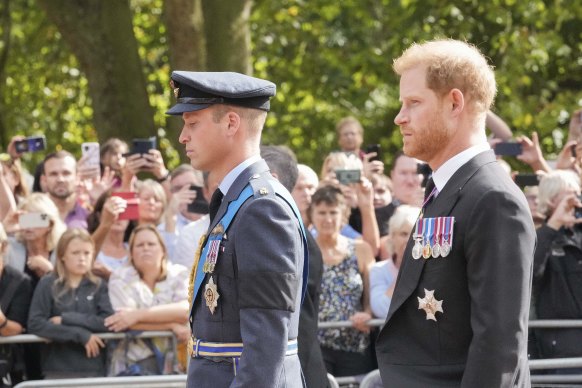 Prince William and Prince Harry walk behind the Queen’s coffin.Credit:Getty

But nobody lining the mile-long route of the procession could fail to be reminded of that similarly bright day in 1997, when two boys barely out of short trousers found themselves marching down the Mall, behind the coffin of their young mother, in front of the entire world.

A lot has happened since then. There have been births, deaths, marriages, interviews with Oprah Winfrey. There has been Eton, Afghanistan, Anglesey, Norfolk and nobody can ever forget the Boujis years, when the two brothers often seemed attached at the hip as they partied their way through their early twenties.

Most recently, since March 2020, they have been separated by an ocean and a continent. But the universe works in mysterious ways.

Last week, it aligned so that the two brothers found themselves just 900 yards from each other, in their separate cottages at Windsor, as the news began to emerge about the deterioration in the health of their grandmother, Queen Elizabeth II. 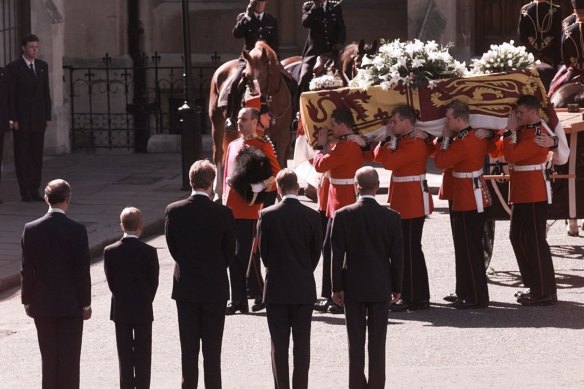 The scenes were reminiscent of Princess Diana’s funeral procession 25 years ago, when princes William and Harry followed their mother’s coffin.Credit:POOL

Barely a week has passed since the late Queen Elizabeth’s death and yet already the media – both mainstream and social – have been alight with rumours and supposition about the figurative distance between the royal siblings.

Yesterday, as they walked out from the Buckingham Palace quadrangle and into the clear view of the whole world, the Prince of Wales and the Duke of Sussex came together to close the gap.

The brothers had begun to narrow it on Saturday, when the crowds at Windsor were delighted by their joint walkabout with their wives, the reunion of the “fab four” that everyone has been waiting for since those dazzling days of their Heads Together mental health campaign back in 2018. But if Saturday’s reunion had a touch of royal glamour to it, yesterday’s came tinged with the unbearable sadness of that long and dark walk from their childhood.

It is, of course, impossible to say how significant the positioning of the brothers was – next to each other, without their cousin Peter Phillips between them, as had been the case at the funeral of the Duke of Edinburgh in April last year. It could have been an arbitrary, last-minute decision as the three got into line in the Buckingham Palace quadrangle. 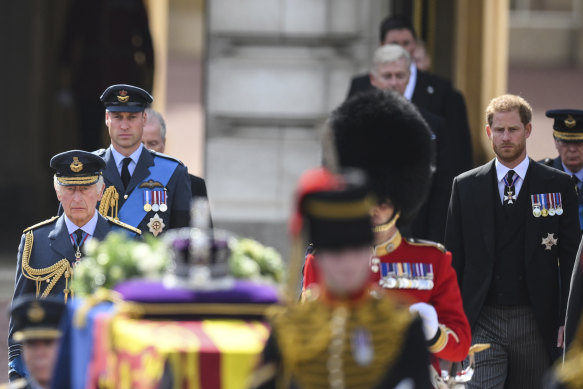 King Charles III, Prince William and Prince Harry walk behind the coffin during a procession from Buckingham Palace to Westminster Hall. Credit:AP

And yet in the context of all that has come before, it seemed a moving show of strength, solidarity and service. Their faces were solemn and steely, no trace of emotion.

The Prince of Wales was in military uniform, the Duke of Sussex, morning suit. If there was any rancour about this, which came despite Harry’s decade of service including two tours of Afghanistan, it was left behind before arrival at Buckingham Palace.

For the two brothers, it has been important that they put on a show of unity during this period of mourning.

For the first time in what feels like years, their goal has been the same: to honour the memory of their beloved grandmother. It was never in doubt they would be anything but respectful to each other. But everyone watching hoped these shows of solidarity might be a sign of things to come.

For theirs is a relationship forged partly in unimaginable tragedy, and it is almost impossible for us to comprehend the full scale of their grief after the sudden death of their mother in 1997. They have, over the years, tried to put it into words. Prince Harry has admitted that for almost two decades, he “shut down all emotions”. In 2017, he told me he spent years having a “flight or fight” reaction at public engagements, without understanding why. He was, in essence, having panic attacks, that he only began to unravel in his thirties. “I, through a lot of my twenties, was a problem and I didn’t know how to deal with it,” he told me on my podcast, Mad World.

“I can safely say losing my mum at the age of 12, and therefore shutting down all of my emotions for the last 20 years, has had a quite serious effect on not only my personal life but my work as well. I have probably been very close to a complete breakdown on numerous occasions when all sorts of grief and sort of lies and misconceptions and everything are coming to you from every angle.

“During those years I took up boxing, because everyone was saying boxing is good for you and it’s a really good way of letting out aggression. And that really saved me because I was on the verge of punching someone, so being able to punch someone who had pads was certainly easier.”

His brother was one of the people who encouraged him to seek help. “He was a huge huge support to me. He kept saying this is not right, this is not normal, you need to talk to [someone] about stuff, it’s OK.”

Yesterday, once more, they walked slowly and in step with one another down the Mall. They followed the gun carriage into Horse Guards Road, and up through the arch into Whitehall, crowds that had been silent for an hour erupting into applause as they disappeared into the distance.

Everyone was there for the Queen. But only William and Harry could be there for each other.