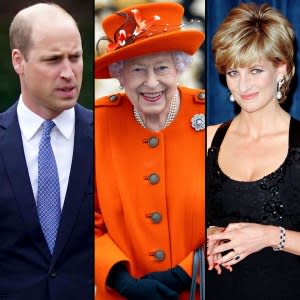 A painful reminder of the past. Prince William reportedly told a mourner that Queen Elizabeth II‘s coffin procession brought back memories of Princess Diana‘s funeral.

Read articlePrincess Diana Through the Years

A bystander who spoke to the Prince of Wales, 40, outside Sandringham House on Thursday, September 15, said that William told her the procession was “difficult” for him and his family, according to The Telegraph. The mourner added that the Duke of Cambridge said the event reminded him of his mother’s 1997 funeral, which took place 25 years before the Wednesday, September 14, processional.

William and his brother, Prince Harry, walked together behind the queen’s coffin as it was moved from Buckingham Palace to Westminster Hall, where it will lie in state until the funeral on Monday, September 19. Photographs of the brothers reminded many observers of similar pictures from Diana’s funeral, where the boys famously walked behind their mother’s coffin ahead of the ceremony at Westminster Abbey.

The Duke of Cornwall and the Duke of Sussex, 38, were 15 and 12, respectively, when their mother died at age 36 in a car crash in Paris. Elizabeth’s late husband, Prince Philip, encouraged them to walk in the funeral procession by telling him that he would walk with them.

Harry, for his part, has said that he doesn’t think he and William should have been made to participate in the ceremony in such a manner. “My mother had just died, and I had to walk a long way behind her coffin, surrounded by thousands of people watching me while millions more did on television,” the BetterUp CIO told Newsweek in June 2017. “I don’t think any child should be asked to do that, under any circumstances. I don’t think it would happen today.”

The brothers have repeatedly spoken about how much their mother means to them. Last year, the duo honored her on what would have been her 60th birthday by dedicating a statue of her at Kensington Palace.

“Today, on what would have been our mother’s 60th birthday, we remember her love, strength and character — qualities that made her a force for good around the world, changing countless lives for the better,” the dukes said in a joint statement in July 2021. “Every day, we wish she were still with us, and our hope is that this statue will be seen forever as a symbol of her life and her legacy.”

Earlier this year, Harry said that his mother remains a “constant” presence in his life, especially since he became a father. The former military pilot shares son Archie, 3, and daughter Lili, 15 months, with wife Meghan Markle.

“It is almost as though she’s done her bit with my brother and now she’s very much, like, helping me,” he said during a Today show interview in April. “Got him set up. And now she’s helping me set up. That’s what it feels like, you know?”