A Pennsylvania woman on the verge of becoming a centenarian just welcomed her 100th great-grandchild into the world.

Marguerite Koller, 99, of Blue Bell, will celebrate her 100th birthday in just a couple months.

But she was able to mark the occasion earlier this month with the birth of her 100th great-grandchild, Koller William, named after her late husband.

‘I’m just thinking how lucky I am,’ Marguerite told NBC Philadelphia as she held the newest addition to the family — which also includes 11 children and 56 grandchildren.

She makes the effort to be there for every baptism and graduation, her family has said in the past, and ‘has created an amazing legacy spanning through generations,’ her granddaughter, Christine Balster, told the local news station.

That family, though, almost did not happen, as Marguerite considered joining a convent and becoming a nun.

Marguerite Koller, 99, beamed as she held her 100th great-grandchild earlier this month 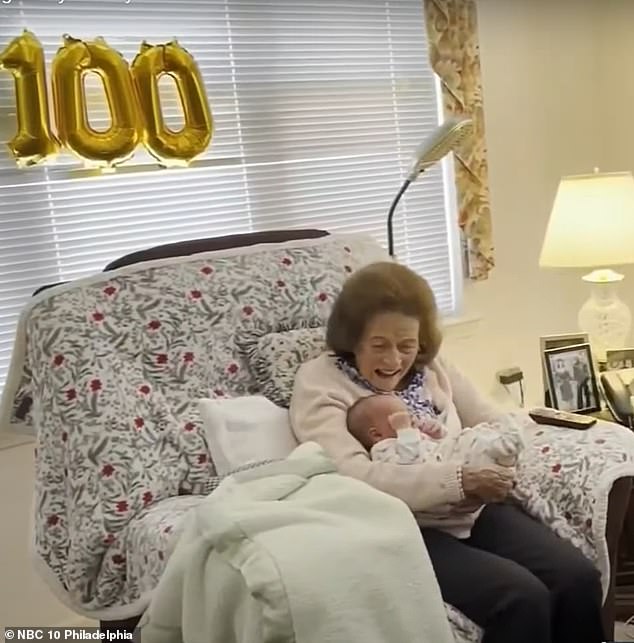 Koller said she is lucky to have such a big family, considering she almost decided to join a local convent and become a nun 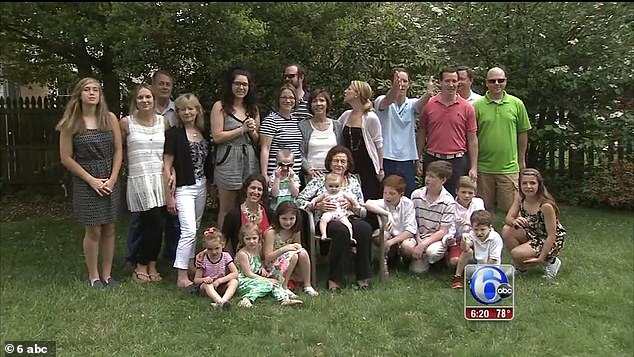 She applied to join the local convent when she was a junior in high school, she told 6 ABC back in 2015, but by the early 1940s, she met William Koller, of Manayunk, who she said ‘talked me out of it.’

The couple then welcomed their first child in the Baby Boom after World War II, when Marguerite knew she wanted to have a large family.

‘I wanted to have a big family,’ she told 6 ABC. ‘I think it’s difficult being an only child — it’s lonely.’

Originally, she said, she ‘figured I wanted 12, but after I started to have them, I wasn’t sure I wanted that many.’

Instead, she settled on 11 children, born over the course of nearly 20 years.

They, in turn, gave her 56 grandchildren, who are now the parents of 100 great-grandchildren.

She has since credited that big family with keeping her active, and making her feel blessed every holiday even after her husband died in 2008.