Security guard calls train passenger a ‘Karen’ and accuses her of hurling ‘racist’ abuse in shocking three-minute tirade as she calls him a ‘pervert’ and rants: ‘You don’t like white women and you don’t like living in England’

This is the shocking moment a train passenger hurled racist abuse at a security guard who then branded her a ‘Karen’ during a heated dispute at a railway station.

Ashiq Rasul was on duty at Beaconsfield Station in Buckinghamshire when the incident took place.

The 40-year-old claims the row broke out over a misunderstanding after he said ‘excuse me’ to the woman and she accused him of calling her ‘sir’.

Mr Rasul then began filming as she launched the tirade at him, accusing him of being a misogynist, a sexist and not liking white women.

The woman calls Mr Rasul unprofessional and goes on: ‘You’re argumentative and you’re confrontational and you probably don’t like women, you don’t like white women. You don’t like living in England.’

As the woman asks Mr Rasul to leave him alone, he questions why she told him he didn’t like living in England while recording on his phone, prompting her to film him in return.

After insisting she is not allowed to film him, Mr Rasul tells her: ‘Just get away from me and do not say anything about me again or I’ll call the police and get you escorted off the property.’

The pair continue to exchange heated words with the unidentified woman calling Mr Rasul a pervert while he calls her a weirdo.

The woman said Mr Rasul doesn’t deserve his job and then tells him: ‘Do you know what I do for a living? I help people like you stay here and get a job.’ 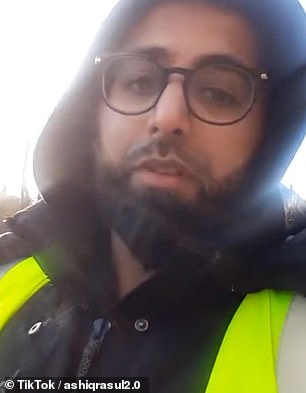 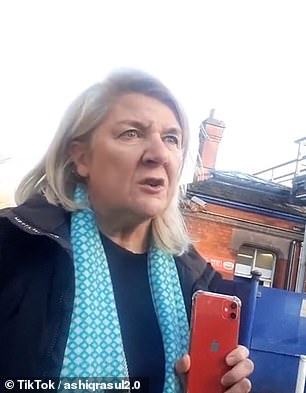 Both parties insisted the other person leave them alone and both attempted to walk away multiple times during the three-minute stand off before returning to continue the spat.

Mr Rasul, who says he has since lost his job for an unrelated incident, said the incident ‘pissed him off’.

He told The Sun: ‘She was being racist. One hundred per cent. Of course she was.

The woman reportedly complained about the incident but Mr Rasul showed managers his video and the complaint was reportedly dismissed.