Woman is jailed for breaking Covid rules after turning up drunk at her ex-boyfriend’s home before throwing TV, microwave and furniture out of a top floor window

A woman has been jailed after breaking Covid rules by turning up drunk at her ex-boyfriend’s house before throwing a TV, microwave and furniture out of a top floor window.

Rosemary Burgess, 19, is said to have become furious after her partner left a comment on Facebook last Thursday.

The teenager stormed round to her ex’s home on the Isle of Man wielding a metal pole, before throwing £800 worth of items out of the window, a court has heard. 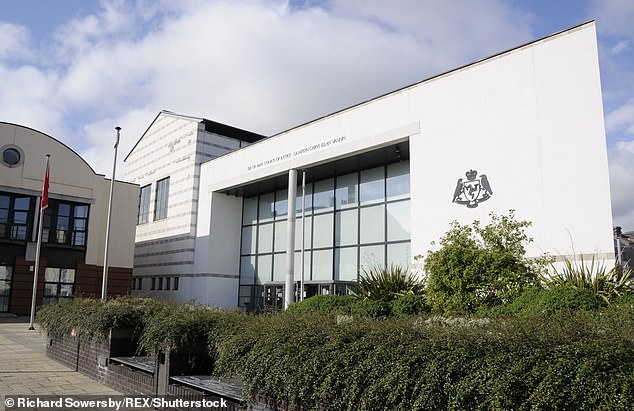 Rosemary Burgess, 19, was jailed at Douglas courthouse after storming into her ex boyfriend’s home last Thursday and throwing more than £800 worth of his belongings out of a top floor window

Burgess, from Douglas, admitted to entering someone else’s home and causing damage to property, as well as breaching Covid-19 rules.

She has been jailed for 20 weeks.

According to the BBC, Burgess arrived at her ex-boyfriend’s flat in Douglas at around 9.30pm last Thursday.

Her arrival was already in breach of the island’s lockdown rules.

Islanders are currently banned from leaving home without a good reason and households are barred from mixing.

Burgess is said to have tried to smash a living room window with a metal pole after she was let inside the flat.

Her ex fled to call the police, but returned to find she had tossed his property out on to a patio below.

Among the debris was a smashed television and DVD player, along with a bedroom chair, cabinets, a chest of drawers, two electric heaters, two bins and a kettle.

A curtain pole and toilet brush were also thrown out.

She was said to be intoxicated and unstead on her feet when police arrived.

Appearing at Douglas Courthouse on Saturday, Burgess was jailed for four weeks for breaching Covid-19 rules, as well 16 weeks for damaging property.

She was also jailed for four weeks for damaging a mobile phone, though that sentence will run concurrently.

exa, for, jailed, throwing, woman
You may also like:

Brazil variant: The five postcodes where people are urged to get Covid test after mutant strain found in UK