Police claim a woman who was critically injured after falling from a fast-moving car on the Princes Freeway at the weekend feared for her safety after her brother, who was driving the car, became violent during an argument.

Motorists allegedly saw the woman’s arm and leg dangling out of the passenger door of the vehicle twice before she fell out onto the road and into traffic.

According to police court documents released on Tuesday, the 30-year-old woman was travelling to Geelong with her brother, 28-year-old David Fosita, on Sunday morning when an argument broke out.

Police allege that at some point in the drive between Werribee and Little River, Fosita became furious after his sister blamed him for the death of another sibling two months earlier and began punching the car radio in a fit of rage.

“The complainant has stated she wanted to get out of the car. Police allege this was due to the complainant being in fear of the accused,” the court documents say.

Fosita, who had allegedly been driving at 100km/h, stopped on the side of the road as other motorists rushed to provide first aid and contact emergency services.

His sister remains in hospital in a critical condition, and the court was told she had been placed in an induced coma, with doctors unable to determine the full extent of her injuries due to fluid obscuring CT scans.

Fosita was charged on Monday with one count of criminal damage for smashing his sister’s car radio.

He has since also been charged with drug offences after unknowingly talking to an undercover cop stationed in his cell, prompting a raid on his home that allegedly uncovered diazepam and cocaine. 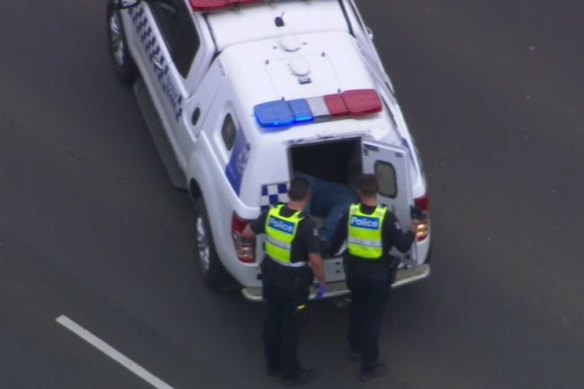 An aerial shot of police at the incident.Credit:Nine News

Police say Fosita has previously been violent towards his sister, who called triple zero in June after he allegedly went on a rampage inside the family home.

According to the summary, Fosita allegedly became enraged when his dog went missing in June and grabbed a coffee table and portable heater and threw them at his sister, narrowly missing her.

He then punched a hole in the wall in the hallway before allegedly entering his sister’s bedroom and knocking over a dresser, breaking the mirror on top of it.

Rozencwajg said it was still unclear whether the woman jumped or was pushed out of the car.

“What is clear is that there was an argument in the motor vehicle.

“If it turns out she jumped out of the car, it’s an indication of how fearful and anxious she was about the accused.”