World’s oldest person dies at 118: French nun ‘Sister Andre’ who enjoyed chocolate and wine every day, retired in 1979 and survived Covid aged 117 passes away a month before her 119th birthday

A French nun who held the title of being the world’s oldest person has died at the age of 118, her retirement home has said.

Lucile Randon, who was born on February 11, 1904, passed away less than a month before she was due to turn 119 having survived catching Covid last year.

Ms Randon, who went by the name Sister Andre after joining a Catholic charitable order in 1944, had taken the title last year after the death of a 119-year-old Japanese woman.

Her death was announced on Tuesday, January 17,  by a Toulon nursing home where she had spent the last years of her life on the Mediterranean coast. 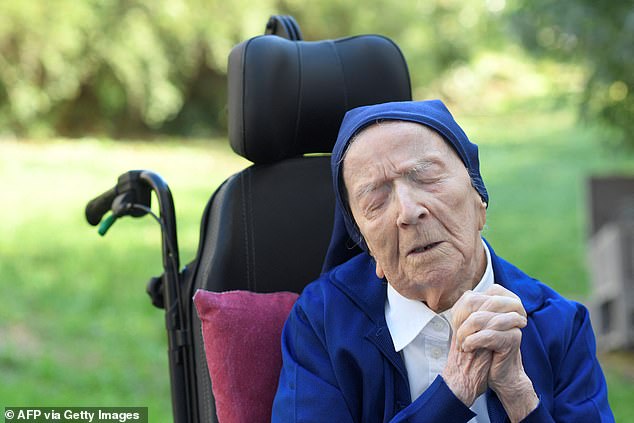 Lucile Randon (pictured), a French nun who was the world’s oldest person, died at the age of 118 on Tuesday 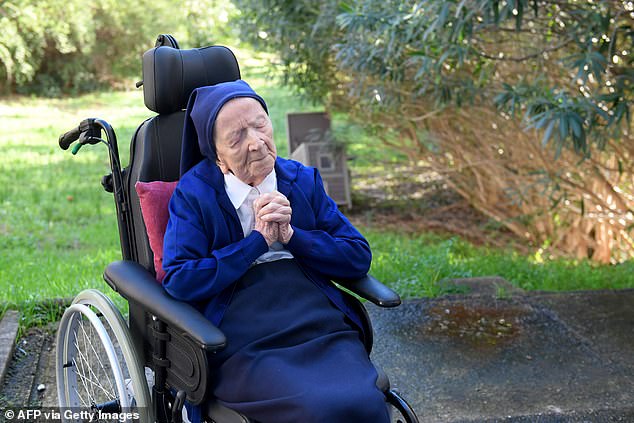 The nun, who became blind in her later years, was born more than a decade before the outbreak of the First World War and was known for her enjoyment of cocktails.

Sister Andre, who had worked as a governess in Paris before joining the religious order Daughters of Charity, would begin every day with breakfast before attending morning mass.

She retired from full time work in 1979 at which point she focused on caring for the elderly until the age of 100.

In 2021 she claimed she ‘wasn’t scared to die’ after contracting Covid days before her 116th birthday.

She became known for her spirited attitude, with her caregivers joking that she liked all the attention she received as she got older.

‘I was always admired for my wisdom and intelligence, but now people could care less because I’m stubborn,’ she jokingly told an AFP in an interview for her 118th tour around the sun.

‘I thinking of getting out of this business but they won’t let me,’ she said.

She was designated as being the world’s oldest living person by the Gerontology Research Group (GRG), which verifies and recording supercentenarians (people who are older than 110).

Sister Andre had become the world’s oldest person in April 2022 following the death of the previous titleholder, Kane Tanaka.

Ms Tanaka was 119 when she passed away in Fukuoka, a city on the southern island of Kyushu, on April 19.

According to the GRG’s World Supercentenarian Rankings List, the world’s oldest person is now Maria Branyas Morera, a Spanish resident who is 115 years old. 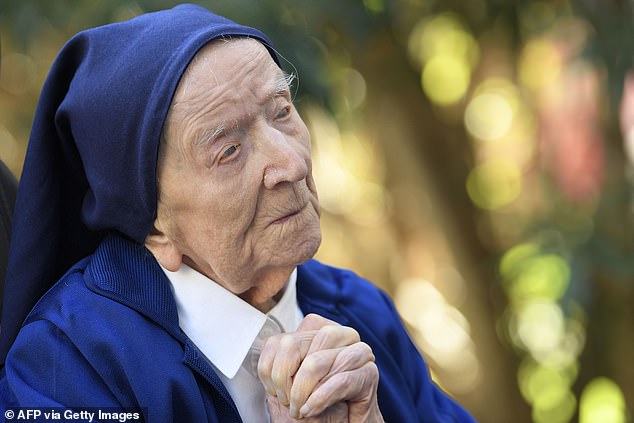 Sister Andre (pictured) was born in February 1904, more than a decade before the outbreak of the First World War 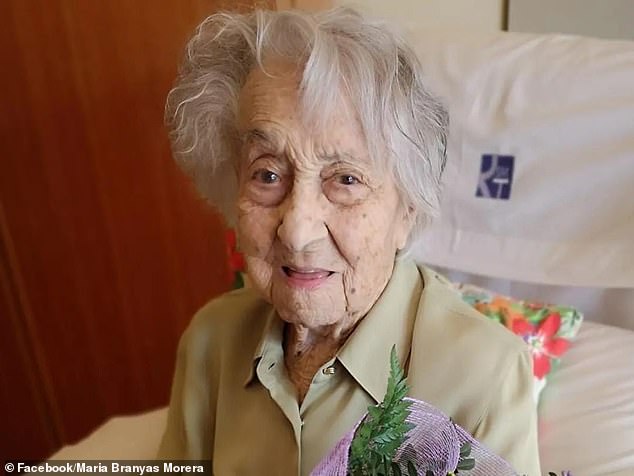 According to the GRG’s World Supercentenarian Rankings List, the world’s oldest person is now Maria Branyas Morera (pictured), who is 115

The oldest-ever living person verified by Guinness was Frenchwoman Jeanne Louise Calment, who died aged 122 years and 164 days in 1997.

Most centenarians are found in the world’s so-called blue zones, where people live longer than average, such as Okinawa in Japan or on the Italian island of Sardinia.

But France, while not considered a blue zone, nonetheless has 30,000 centenarians, according to statistics institute Insee, with around 40 of them 110 or older.

Last year Brazilian officials claimed to have found a woman who was 121 years old living in a small city in the state of Bahia.

The woman, called Maria Gomes dos Reis could have been born on June 16, 1900, making her by far the oldest person in the world.

However, this has not yet been confirmed by, with her family needing to pay 4,000 Brazilian reais, around £640, and provide legal documents proving her age to Guinness World Records.