Singapore: For as long as the economy was growing, food was on the table and their children had greater opportunities than them, many of China’s citizens were happy with the grand bargain they had struck with the Communist Party.

They traded human rights and freedom of speech for economic growth and stability. That deal is no longer guaranteed. 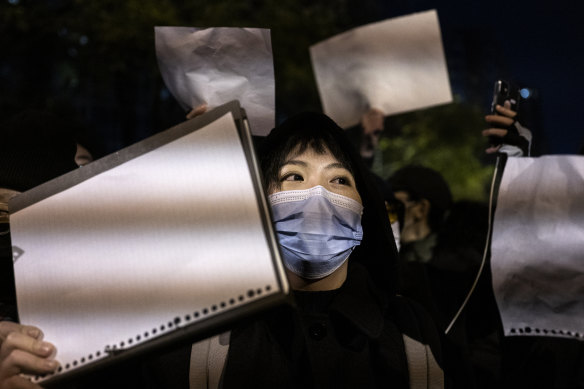 The A4 army: Fury over lockdown measures has developed into a bold display of dissent against Chinese authorities.Credit:Getty

The protests that have rocked the country this week are, at their core, a response to its economic woes and the draconian zero-COVID policy that has hobbled the country for the past year. They are led by its youth, fully vaccinated and frustrated by a system that has seen them lose their jobs and businesses to protect a party that is reluctant to give up control and an elderly population that is unwilling to get vaccinated.

One in five young Chinese in the major cities is now unemployed, the highest level of youth unemployment since records began. Caixin’s Purchasing Manager’s Index – a key measure of economic activity and business conditions – has plummeted in both the services and manufacturing sectors. The index falls with each surge of new cases and as restrictions tighten, businesses close and more workers lose their jobs.

The pattern has repeated since the earliest days of the pandemic but has now reached breaking point as residents see no way out of an endless cycle of lockdowns.

On Monday night, a young woman confronted police on Wangping Street in Chengdu city centre. The street is usually filled with neon lights, a pulsing red pagoda and hundreds of little restaurants.

“This used to be bustling in the past. It’s all locked up now,” she said. “But you are not concerned because you all have salaries. The money and deposit of ordinary people are feeding you now. What are you? You are a parasite! You eat us, peel our skin, drink our blood, and eat our flesh. Do you know how miserable the lives of ordinary people are?”

The economic impact of pandemic measures has transformed frustrations into a visceral condemnation of authority, including police, government officials and medical companies who have grown fat off testing regimes.

“From today, I’m not giving oral sex for public power,” said a protester in Beijing on Sunday.

“Businesses are finding themselves without warning, being asked to shift and close,” said another in Chongqing. “That means that we have workers staying in factories, sleeping in areas and then finding to top that off that perhaps they aren’t even allowed to get food orders and without notification that that presents a whole other layer of problems.”

“Everyone is heavily impacted and at this moment, we don’t know how we’re going to get out,” said a member of the European Chamber of Commerce in China who asked not to be identified because the protests are politically sensitive.

Louise Loo, a senior economist at Oxford Economics said the zero-COVID policy was “increasingly at odds with the central government’s broader goals of fair and sustainable economic growth”.

The biggest failure of governance has been in the country’s appalling vaccination rates among the aged. Just 65 per cent of those aged over 80 have been vaccinated against COVID-19. And only 40 per cent have received their third shot. Publicity campaigns have been largely non-existent.

The government has never contemplated mandates or restrictions on the unvaccinated due to lingering vaccine hesitancy and a history of vaccine scandals. The outbreak in Hong Kong, which has a similar vaccination uptake and cost 10,000 lives, spooked Chinese officials into fearing that there could be hundreds of thousands of excess deaths if a similar outbreak occurred in the mainland.

The mainland has admirably limited official COVID deaths to 5233, but authorities have done little to remedy the perilous immunisation situation, leaving the 90 per cent vaccinated youth carrying the consequences for its unvaccinated elderly. “In terms of vaccination, we have not seen a drive for vaccination in this area,” said the business owner in Chongqing.

On Tuesday, China’s National Health Commission said it would speed up vaccination programs among the elderly through a door-to-door campaign but offered no incentives or restrictions for those who choose to remain unvaccinated.

President Xi Jinping now faces questions about both his handling of COVID-19 and the Communist Party’s role in managing the state. Activists who have called for Xi to step down are on the fringe of the movement. Some have been asked by fellow protesters to tone down their criticism of the party and focus on the goal of ending COVID restrictions.

“They have no good options in the near-term to address protesters’ demands: relaxation of strict COVID control policies would almost certainly lead to a surge in deaths that would destroy the leadership’s claim to have responded effectively to the pandemic,” said Mark Williams, chief Asia economist at Capital Economics.

But Xi’s failure to vaccinate key parts of the population and follow through on his plans, outlined in October, to loosen crushing economic measures has brought the country to this point.

More than 13 million companies deregistered in 2021, up nearly 30 per cent year-on-year. That figure is set to rise sharply in 2022. Economic growth will slow to 3 per cent this year, well below the official target of 5 per cent.

For the first time, Xi has betrayed the party’s grand bargain with its people – the promise of a better economic future.