Hell hath no fury like a social media mob that thinks it has identified a luxury scam.

Or so it seemed this weekend, when a series of viral TikTok videos involving an $US825 ($1100) Chanel Advent calendar and the disappointed customer who bought it went viral, inspiring a multitude of users to call foul on the brand. Or rather, all over its Instagram page. 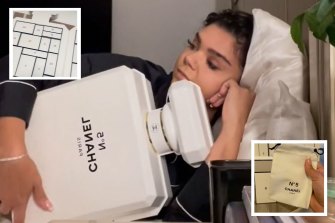 In one way, this is merely the latest example of the vigilante justice meted out against powerful global brands by individuals willing to point out perceived injustice, including cultural appropriation, copying designs and other forms of misbehaviour, and of the shifting balance of power between brands and audience.

But the emotions around this anti-Advent calendar campaign have been particularly high, in part, perhaps, because of the holiday involved, and the idea that rather than representing good will toward customers, this particular gift item suggests they’re being played for suckers.

Here’s what happened: On Dec. 3, Elise Harmon, a Tiktoker in California, posted a video of herself unboxing a Chanel Advent calendar in the shape of the Chanel No. 5 bottle.

“Am I crazy?” she asked. “Absolutely. But I’ve never seen a Chanel Advent calendar, so let’s see if it’s worth the hype.”

(She had never seen a Chanel Advent calendar before because there had never been one. This was a special holiday initiative to celebrate the 100th birthday of Chanel No. 5.)

Harmon gave the calendar “a 10 out of 10” for packaging, but she was upset to open a box and discover what appeared to be Chanel stickers. A hand cream, on the other hand, she liked.

And so it went with the unboxing over eight more posts, in which Harmon revealed perfumes (good), key chains (not so much), lipstick and nail polish (mostly good, even if they were also mostly sample size), a mirror (not), a rope bracelet with a CC wax stamp (huh?), a plastic mini snow globe and … a Chanel dustbag, the bags used for shoes or other accessories. It was the dustbag that really set people off.

As of Dec. 6, the series has been viewed more than 50 million times, and each post has thousands of comments, mostly along the “you wuz robbed” or “who do they think they are?” lines. To cap it all off, Harmon told her followers that she had been “blocked” by Chanel.

Though Chanel has a TikTok page, it is inactive and set to private, with no followers, so it was unclear where Harmon had been blocked — she did not respond to requests for comment — but that did not stop her audience from descending on Chanel’s Instagram account, which has more than 47 million followers and which has been posting about the Métiers d’Art show to be held in Paris on Tuesday.

Under each photo of the work of the various specialty ateliers Chanel now sponsors — the flower maker Lemarie, the embroidery atelier Montex, among others — and promotional clips for the collection film, are hundreds of comments: “Don’t ignore the inevitable! We want some answers!” And, “Is the film funded by the advent calendar sales?”

As of Monday, four days after Harmon’s original video, the action was still going strong — and her follower count was growing. (A similar backlash has occurred in China, where a blogger also called out the brand’s Advent calendar as not worth the money.)

As for Chanel, it has not publicly addressed the issue, but Gregoire Audidier, the international communication and client experience strategy director at Chanel Fragrance and Beauty, wrote in an email: “The recent claim of a person being blocked by Chanel on TikTok is inaccurate. We have never blocked access to the Chanel TikTok page to anyone, because it is not an active account and no content has ever been published. We are committed to sharing our creations with our followers on all social networks we are active on. Our pages are open to everyone, and our followers are free to express their feelings and opinions, whether they are enthusiastic or critical.”

Chanel is not, as it happens, the only luxury brand to offer an expensive beauty Advent calendar, though it is the most expensive. Indeed, it’s actually late to the game, which took off about a decade ago.

Now there are a plethora of such limited-edition Christmas calendars, including ones from La Mer, Guerlain and L’Occitane. Dior ($US550), Armani ($US310) and Saint Laurent ($US300) also have beauty Advent calendars. None of them are cheap, and most contain a mix of beauty samples — the mini versions of products often given free with a purchase — and full-size or limited edition offerings.

And the beauty versions are just the latest iteration of the way Advent calendars, invented in the mid-19th century in Germany to teach children about the catechism and spirituality, have been commercialised over the years. Even the Nazis created their own as a form of propaganda.

(The priciest Advent calendar on the market is probably the new $150,000 Tiffany version, a 4-foot-tall cabinet with a reproduction of the Jean-Michel Basquiat painting from Tiffany’s recent “Equals Pi” ad campaign on the front and 24 gifts inside.)

So why has the Chanel version gotten people so het up? After all, luxury brands have never been shy about the fact that, in large part, what their customers are buying is the brand equity itself. A dustbag with “Chanel” on it is worth more than a dustbag with nothing on it.

Moreover, Chanel does lay out all the contents of the calendar on its website, so it’s not a secret what anybody is getting for their money. It’s not apparent that their offering is any more flimflam than that of other brands.

Those who profit from perception can also lose because of it. What Harmon opened up wasn’t just a new mini perfume. It was a new reality, now completely out of the box.

Florence Pugh, Hair Chameleon, Is Back to Brunette

Quiz: What Is Your Skin's Undertone?

Need Some Everyday Makeup Staples? Check Out Our 7 Faves From Smashbox