After saying farewell to Twitter, Chrissy Teigen is still highly active on Instagram and showed off her new long grey hair makeover with fans.

Fortunately for Chrissy Teigen‘s millions of social media fans, she’s still a prolific Instagram poster after making the heartbreaking decision to quit Twitter on Mar. 24. She’s joking about going through a “midlife” crisis at the age of 35, thanks to her newest wig selection. Chrissy modeled long, straight silver tresses in two IG posts on Mar. 26. She could be seen inside her home closet in front of her famed robe collection, in a video where she stroked her new locks while wearing a fierce outfit.

Chrissy rocked high waisted, black leather pants with a wide matching belt tied off around her mid-section. She wore a white t-shirt with shoulder pads and the grey locks cascaded down either side of her chest. Chrissy had originally shared the video in her IG stories, but ended up doing a full post on her look and wrote in the caption “I’m ok really!!!” since she no longer has Twitter as an outlet to share how she’s feeling.

In another video, Chrissy took her look out on the road as she was seen in the backseat of a moving car. The cookbook author showed a close-up of her stunning, perfectly made-up face while running her fingers through the wig. In her first IG stories video, Chrissy tagged her hair stylist Irinel de León and makeup artist Kristine Studden for helping get her glam with her new silver fox look and makeup, so maybe she’s making another Bristol Farms grocery store run where she’s constantly being photographed by the paparazzi. 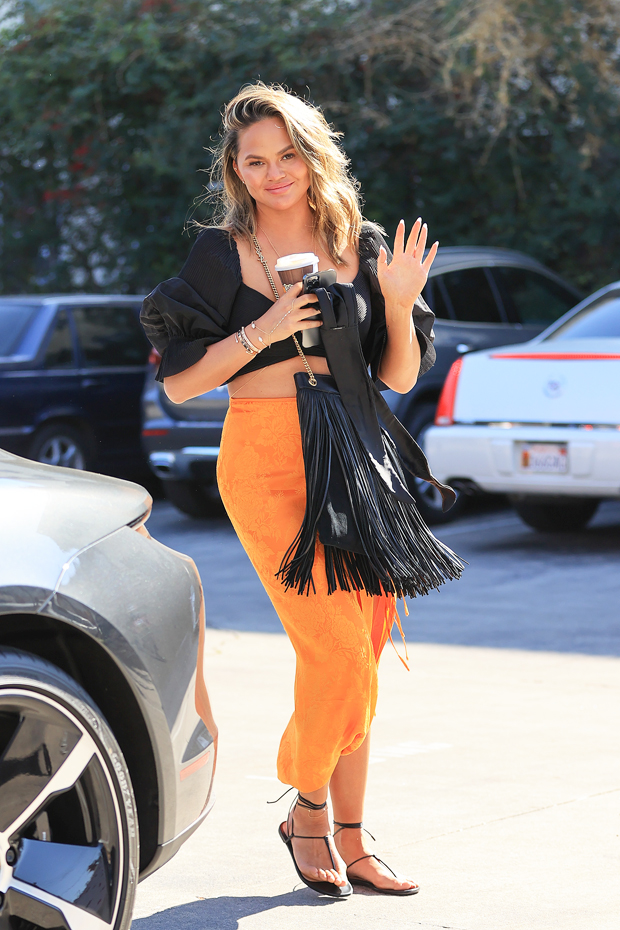 Chrissy reposted that video to her IG page as well and told fans, “trust me it’s my midlife lol” about her going grey for the day. She’s definitely wearing a wig, as in her Instagram stories shortly before debuting her long, silver hair, Chrissy showed how she was getting her shoulder length bronde bob done up in tight braids along the side of her head, so that the wig would more easily fit.

Chrissy rocked the Twittersphere on Mar. 24 when she deleted her account, saying that so much “negativity” over the years had left her “deeply bruised.” “Hey. For over 10 years, you guys have been my world. I honestly owe so much to this world we have created here. I truly consider so many of you my actual friends,” she wrote in her farewell post to her followers.

“But it’s time for me to say goodbye. This no longer serves me as positively as it serves me negatively, and I think that’s the right time to call something,” the Cravings author went on. “I’ve always been portrayed as the strong clap back girl but I’m just not. My desire to be liked and fear of pissing people off has made me somebody you didn’t sign up for, and a different human than I started out here as!” She then admitted to making plenty of mistakes on the platform, “But one thing I haven’t learned is how to block out the negativity.” About an hour later, she deleted her account. Chrissy has nearly 35 million IG followers, so she’s still an active social media presence.

These $27 Wrangler Jeans Are Giving Us Harry Styles Vibes

This Skip, Lunge, and Pull Workout Takes Under 20 Minutes

Maisie Williams Bleached Her Eyebrows, Just When We Thought She Couldn't Get Any Cooler