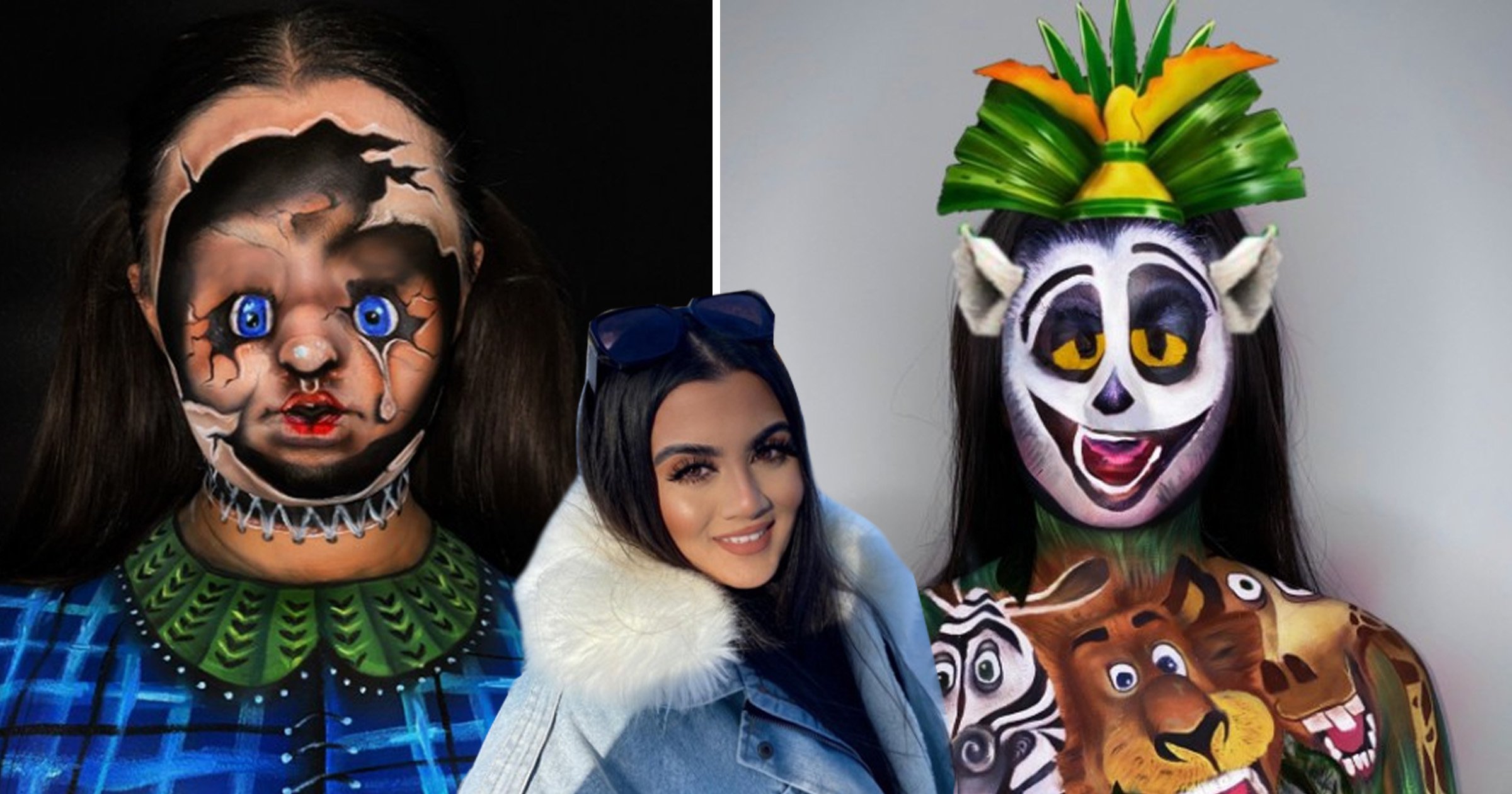 A student who decided to make a U-turn on her career plans to become a midwife is now a full-time makeup artist.

The 19-year-old takes inspiration for everything, from DVD covers to sweets, and has painted popular characters from Shrek, Madagascar and Frozen.

Last June, Nikhita completed her first full portrait of Harry, Ron and Voldemort from Harry Potter, which stretched over her neck and chest.

She said: ‘I’d watched The Philosopher’s Stone the night before and I thought it was a simple idea which was a bit different to what I usually do.

‘Everyone was really shocked by that one – and I think I shocked myself a little bit because I think that was one look I was really happy with. I’m a perfectionist.’

Nikhita, from Staffordshire, mostly uses films and TV for inspiration. She’s even created a festive Home Alone-inspired piece with Macaulay Culkin’s face on her shoulder.

However, her hobby is incredibly time consuming – not only with the painting itself, but the removal afterwards, too.

She added: ‘I sit there at my makeup desk for nine-plus hours painting.

‘It takes ages. I’ve got to clean my brushes and wipe down all the paints and clean my work surfaces.

‘There’s all the spray in my hair to remove and the glitter and the gems are all on the floor.’

The teen began experimenting with cosmetics at the age of 10, often copying her mother, Dipika, as she put on her makeup.

Nikhita said: ‘I’ve loved doing make up my entire life. My mum used to always play around with eyeshadow and I used to just copy everything she did.

‘At school, it was just a hobby but I never really knew it was an actual career, so when I was aged 16 and left Year 11, I went on to sixth form planning to pursue a midwifery career.

‘I got more knowledge on special effects makeup in movies and TV makeup and thought that’s actually perfect, it’s what I want to do.

‘I had a complete career change. It just carried on from there.’

Nikhita taught herself the skills using YouTube videos and then decided to take a college course in media makeup before starting her degree at University College Birmingham.

It seems lockdown has also been a blessing in disguise for the young artist, as the extra hours have given her more time to paint.

She said: ‘There was so much I had planned, including work experience outside, but I think the lockdown gave me time to practice so much.

‘I was given time to actually sit down, plan looks and spend time doing it.’

Nikhita’s beautiful pieces can be found over on her Instagram page @makeupartistrybynikhita – and her recent Tracey Beaker tribute even received praise from actress Dani Harmer.

The talented youngster hopes to one day work alongside leading makeup artists like James Charles, Val Garland and Dominic Skinner.

Artist, body, P, Self-taught, teen
You may also like:

What will Meghan Markle’s intimate baby shower look like? The venue, the guests, and more

Influenced by TikTok, James Corden's Middle Part Will Haunt Me in Perpetuity