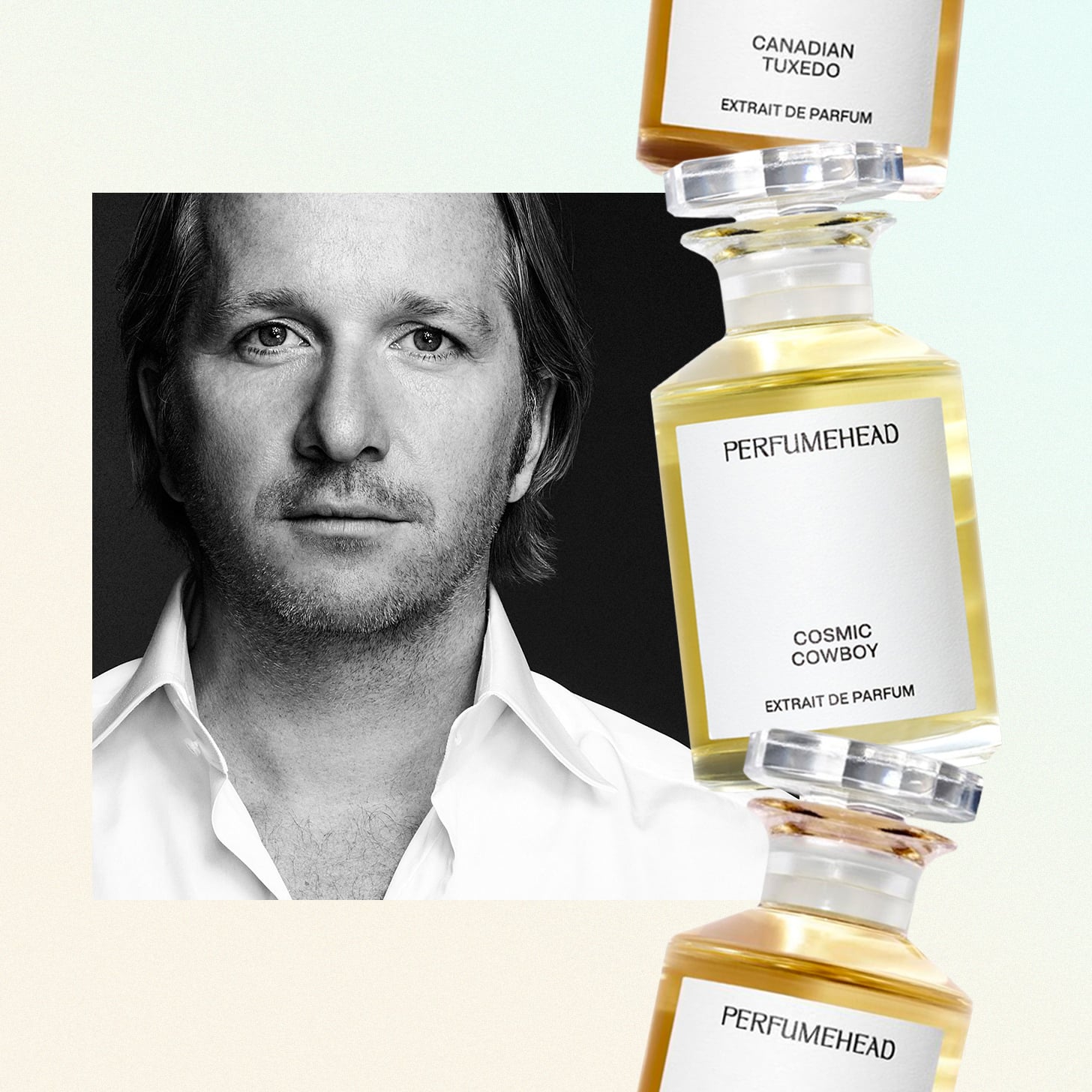 When Daniel Patrick Giles decided to start a perfume line, he set out to do so with a haute couturier’s meticulous attention to inspiration, craftsmanship, and branding. While his background in fashion and beauty inspired him to create a fragrance house on par with the greats — thinking along the lines of Frederic Malle, Chanel, and Diptyque — he chose to do so through the lens of an Angeleño. The goal with Perfumehead was to create beautiful scents, and to the Toronto-born creative, the city of Los Angeles served as the ultimate muse.

“I didn’t want it to be LA as a cliché, I wanted it to be my osmocosm, or scent universe, of Los Angeles,” he tells POPSUGAR. “Part of my philosophy on scent is that I view it like cinema; there really is depth and narrative and emotion in a great scent. LA was the perfect backdrop for me because I love living here.”

Envisaged from the beginning to capture the city’s cult appeal through the eyes of its founder, Perfumehead evokes the inherent contradictions in the city’s legacy: a place where memories of Old Hollywood glamour exist alongside modern-day decay; where timeless elegance coexists with mercurial trends. The brand’s aura exudes a sense of exclusivity — a luxurious little secret shared among the industry’s inner-sanctum — even before you dive into the olfactory experience of the seven-scent collection.

Learn more about Perfumehead from founder Daniel Patrick Giles below.

DPG: It really started for me when I was 16, my love affair with fragrance. I was on a school trip to Paris, and while everybody was heading for the Eiffel Tower, I was beelining to the Galleries Lafayette to buy YSL Opium. The campaign was shot with model Jerry Hall, and Helmut Lang had done the photography. I said I was buying it for my mom, but I was really buying it for myself. It was such an incredible experience; I had never seen someone present a fragrance before. I immediately just fell in love.

My career ties into this because I was the creative director at a company called Holt Renfrew in Canada. I worked with all the fragrance houses and fashion houses and accessory houses. They would come into the store and talk about notes. We launched Jo Malone, and I was impressed by the extent of her line. That was the second layer that really was poignant for my love of fragrance.

Then I would bring everything to COVID and closer to the last couple years. I have been in the industry over 20 years and always wanted to start my own business. At beginning of COVID, I decided this was it. But in 2020, I almost died of COVID — my doctor saved my life, that’s how bad it was. In a matter of five days, my entire life changed. I had migraines for months, never got out of bed for two and a half months, and I lost my sense of smell.

I was halfway through Perfumehead, and my sense of smell was gone. It only lasted about a month or two, but as I got better over the course of a year, I started to really appreciate, crave, and understand that scent is something that we take for granted. I became much more passionate, I would say, about fragrance because I had lost it. I vowed that through that experience, I would never take it for granted and I would really appreciate natural, beautiful smells much more, and I wanted to share that with people.

DPG: There is a book that I read that had a very important impact on the brand, called “Nose Dive” by Professor Harold McGee, where he talked about the osmocosm — the scent universe, or universe of scent. I look at fragrance slightly differently: we all live in an osmocosm and have the opportunity to center and surround ourselves in scent. Part of my philosophy on scent is that I view it like cinema; there really is depth and narrative and emotion in a great scent.

Los Angeles was the perfect backdrop for me when I began creating scents. I really wanted to create this love letter to the city as my creative muse: it’s a city without limits, a city of contradictions, and I find living here to be a very heady experience. So as I was crafting the brand and fragrances, I wanted to start in LA because I thought it captured a lot of the sentiments and things that go into a fragrance through the fragrance notes.

Like LA, fragrance notes are very layered; I drew lots of parallels. I didn’t want it to be LA as a cliché, I wanted it to be my osmocosm of Los Angeles. That’s how I really started forming the ideas for the fragrances. For example, Room Number is all about my experiences of staying at the Chateau Marmont when I didn’t live here — there is decadence and decay within this really old hotel that is still today where all the hip, cool people want to be. All these elements really factored into the stories I wanted to tell. I did a ton of research around Los Angeles. The original name of Los Angeles was Queen of Los Angeles, and that’s where the name of Reine des Anges came from.

Every fragrance also has a time of day and has an emotion behind it. I put together this big, elaborate scrapbook of the mood I wanted to create with each fragrance. It layered and built from there as I worked with four female perfumers.

DPG: One thing I did was I primarily worked with female perfumers. From what I saw from my years in the fashion and beauty industry, most of the noses were male. I have that male perspective, but I wanted the female perspective. I think it was one of the best things I did because all of our fragrances are gender-neutral. I don’t see fragrance through gender. This allowed us to have complete creative freedom to really climb into these stories and create fragrances around them.

I also partnered exclusively with Violet Grey because I wanted an LA launch and for the retail partner to be iconic to LA. The store is highly curated, and I’ve been a fan of Cassandra Grey and the Violet Grey concept since day one. As a consumer at that store, I kept thinking about it as being this beautiful jewel box — it’s so intimate, so personal, and tiny. I imagined that when experiencing fragrance there, it could become a personal experience. I really developed the perfume bottles with Violet Grey in mind.

My full intention was to create beautiful scents. I wasn’t trying to be polarizing. Keep in mind these are extracts; they’re not an eau de parfum. Our percentage of oil is really high, and all our products are hand poured, hand labeled. It’s very much back to the craftsmanship. I wanted people to feel and experience something. I wanted it to feel very much old world but modern and really have the craftsmanship be an emphasis so it is intimate and made in small batches.

I spent 15 years as a fashion director, and I am so grateful for that background because I view fragrance the same way: this is the haute couture of fragrance. When you look at couture and the handcrafted elements that go into it, it’s exactly that idea. That played hugely into the development and inspiration — most of my inspiration comes from the fashion world, movies, iconic women and men in movies. Jane Birkin, for instance, is iconic to the brand. I also tend to like a lot of what happened in the ’70s — I like the casualness-but-not of the ’70s. So fashion plays a huge role.

DPG: I have seven kids, but I’m going to be that horrible parent that picks a favorite: Cosmic Cowboy ($425). I always wore a musk fragrance, whether it was Kiehl’s or Frederic Malle or Serge Lutens, which is one of my favorite fragrance brands. I wanted to create a musk scent for myself, so Cosmic Cowboy is my fragrance. I’ve worn it since prePerfumehead. I was already working on it a year or two before, and people would always stop me and ask what I’m wearing.

But after making the quintessential musk fragrance, what started happening was I began mixing it with Canadian Tuxedo. So the Canadian Tuxedo and Cosmic Cowboy combination became my new favorite. It’s really sexy, layers beautifully, and instead of getting 20 notes in a fragrance, you’re getting 40. When you try Cosmic and Canadian together, it will stay with you for hours.

That’s what a lot of people love about the wearability of the brand. The two together makes a sort of dance of all these beautiful notes.

You May Regret Getting the Buccal Fat Removal Procedure Later

The Kosas Skin Illuminating Enhancer Is a No-Makeup Makeup Hero

Taylor Swift's Grammys Nails Are a Tribute to "Midnights"