Kelly Ripa loves nothing more than spending the holidays with her family, including her husband, Mark Consuelos, and their three grown children, Michael, Lola and Joaquin.

But with their daughter spending time across the pond in London, the Live host had to prepare herself for the fact they may not all be able to unite this Thanksgiving.

However, it seems that they will now be able to celebrate as a family with Kelly delivering the happy news to fans that she had returned to New York.

In a clip Kelly posted to her Instagram Stories, Lola was seen crawling on the floor and fawning over their dog Lena, who couldn’t control her excitement at her coming home.

Kelly captioned the emotional reunion: “@theyoungestyung and Lena together again!”

POPULAR: Kelly Ripa’s change to living situation with husband Mark Consuelos in the past few years

While all three of their kids have been living away from home for over a year now, this year saw a big change for Lola. 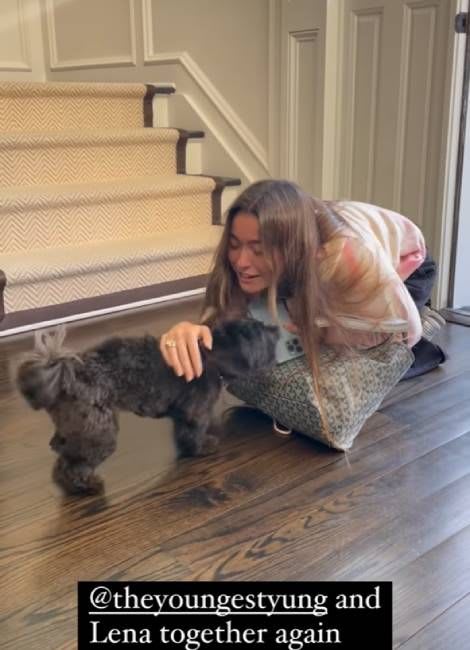 Kelly is delighted to have Lola home for Thanksgiving and so is their dog!

Instead of living on campus at NYU, she’s currently in Europe on an exchange program, set to spend a few months studying abroad.

The holidays are clearly huge for all of them and they’re used to coming together for a festive time, often including friends and other relatives.

Last year, David Muir, spoke about Kelly being his plan B if things didn’t go to plan while he was hosting his own Thanksgiving.

Kelly and Mark will be surrounded by their children

During an appearance on Live with Kelly and Ryan, the World News Tonight anchor and good friend of Kelly, opened up about cooking for his loved ones and said: “We are a smaller group coming for Thanksgiving this year, and I’m going to cook,” before adding: “But Kelly has offered to be the back-up plan.”

Ryan agreed with his choice, adding: “She’s a good back-up plan,” as David hilariously continued: “I have not mentioned that to the family because they’ll just go straight to plan B!”

Kelly gave her own two cents on the proposal, saying: “Plan B is totally catered, because I have no time this year. I’m not even messing around. I’m not even pretending to bake a pie.”

“I Zoomed with Hailey Bieber’s hairstylist, and these are the 5 most useful things I learned”