CHRISTOPHER STEVENS reviews last night’s TV: A childish sitcom perfect for kids – if it weren’t for all the swearing

By his own admission, the first man responsible for foul language on television was Sir David Attenborough.

As a young producer in 1952, he invited a Cockney rat-catcher named Bill Dalton to talk about his work on a live show.

Bill brought a cage full of brown rats, and hauled one out by the tail, whirling it around. 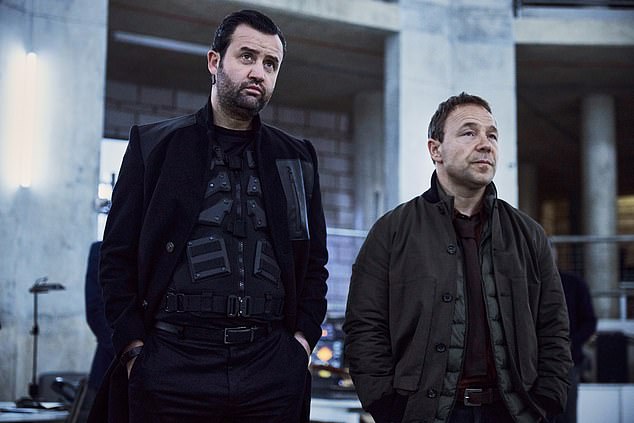 The police comedy Code 404 (Sky Comedy) returned for a third series with streams of swearing. But the four-letter words are the least funny part of this broad sitcom

‘Now I don’t want you to think,’ he told the camera, ‘that I am in any way maltreatin’ this rat. But unless I gets ‘im slightly dizzy, the b****r will bit me.’

The nation was scandalised. These days, thousands of viewers might protest at seeing a rodent rotated by its rear end, but hardly anyone would raise an eyebrow at such a mild curse.

Even the most obscene language has lost its power to shock — which leaves me wondering whether there’s any point to all the effing and blinding.

The police comedy Code 404 (Sky Comedy) returned for a third series with streams of swearing. But the four-letter words are the least funny part of this broad sitcom.

Starring Daniel Mays as a bionic copper with malfunctioning upgrades, and Stephen Graham as his despondent partner, Code 404 would be far better as a children’s show than a post-watershed comedy.

Handy habit of the night

A BBC study shows that 80 per cent of viewers aged 18 to 25 switch on subtitles when they watch TV, glancing up to read the words and then going back to their phones.

Good practice for when they get a bit older…

Many of the gags seem aimed squarely at seven-year-olds. Half robot, half reanimated corpse and all idiot, DI John Major belongs in a Hanna-Barbera cartoon.

He wrecked a police stake-out by arresting the chief informant, bundling him into the boot of his car and leading his partner on a high-speed chase.

Hauled over coals by their chief superintendent, Major explained cheerfully: ‘We had a failure of intelligence, boss.’

‘Yeah, you got that right,’ sighed his sidekick.

There’s a great running joke in Major’s relationship with the scientist who programmed him (Amanda Payton). Whenever he sees her, he becomes the sulky, truculent teen to her proud mum.

Immune to cynicism, devoid of tact, DI Major is thrilled to be hunting a serial psycho. His first theory is that the killer picks victims based on the Mr. Men books.

Then he switches his attention to the Seven Dwarfs (‘What was the grumpy one called?’ he asks).

The best of the other one-liners are equally childish. DCS Dennett (Rosie Cavaliero) begins her funeral oration for a dodgy copper: ‘Perhaps fittingly for a man who died on Pancake Day, there were two sides to Clifford.’

And when Mays and Graham arrive at a crime scene, a forensics officer orders them to ignore the bloodstains: ‘That’s from a previous murder, a few months back.’

With jokes as silly as that, Code 404 ought to be on at teatime. But almost every sentence would have to be bleeped, to make it fit for family viewing.

Good comedy that appeals equally to adults and children is rare. BBC1’s Ghosts is one of the few sitcoms currently doing it well.

The endless foul language in Code 404 makes it unsuitable for the audience who ought to enjoy it most — the under-tens. 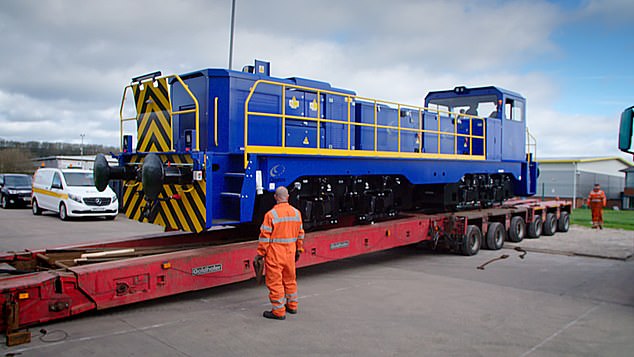 No doubt there’s a fair bit of swearing under the breath as hauliers struggle to manoeuvre 80-ton locomotives on lorries through narrow village streets. But it’s cut out in the edit of Train Truckers (Yesterday).

HGV drivers were using a giant trailer to transport Sir John Betjeman — a diesel engine, that is, and not the late poet laureate, though no doubt he would have relished a sojourn at the North York Moors heritage railway.

Every job on this show includes a computer graphic to demonstrate how easily a loco could topple over. Poor old Sir John — how undignified for him.