Armie Hammer Accuser Claims Elizabeth Chambers PUSHED Victims To Come Forward So She Could Get Custody In Divorce!

One of Armie Hammer’s accusers is calling out Elizabeth Chambers!

As we previously reported, the 40-year-old opened up in an interview with E! News this week about the state of her relationship with Armie after the 36-year-old actor was accused of abuse, manipulation, and sexual violence, saying that the former couple is “in a really great place.” While they are no longer together, she also said she speaks to him often and is there to support him during his “healing” process for the sake of their children, Harper and Ford. She explained to the outlet:

“Divorce is not yet finalized, being in different countries and traveling back and forth have delayed it a bit, but we are in a really great place. We talk all the time, we’re committed fully and wholly to our kids and to being together as much as possible in a non-romantic way for our kids, because kids need their moms and need their dads. … Armie’s really been focused on his healing and his process, you can’t really take care of someone until you are taken care of right?”

All light and love, right?

Well, Effie, who led the charge in using her social media accounts to drop the bombshell allegations against Armie — and later accused him of rape, is not feeling that love. She slammed Elizabeth for her new comments supporting her ex, heavily implying she was being two-faced about the whole thing! How? She exposed the actress for allegedly pushing her to reveal her accusations against the Call Me By Your Name star in the first place!

On Wednesday, she shared several screenshots of text messages purportedly sent by Elizabeth to her Instagram Stories. One alleged message from her read:

“I’m obtaining a copy of the NDA he used and think there’s an error in it, which would make it null and void. As soon as I confirm, can you post?” 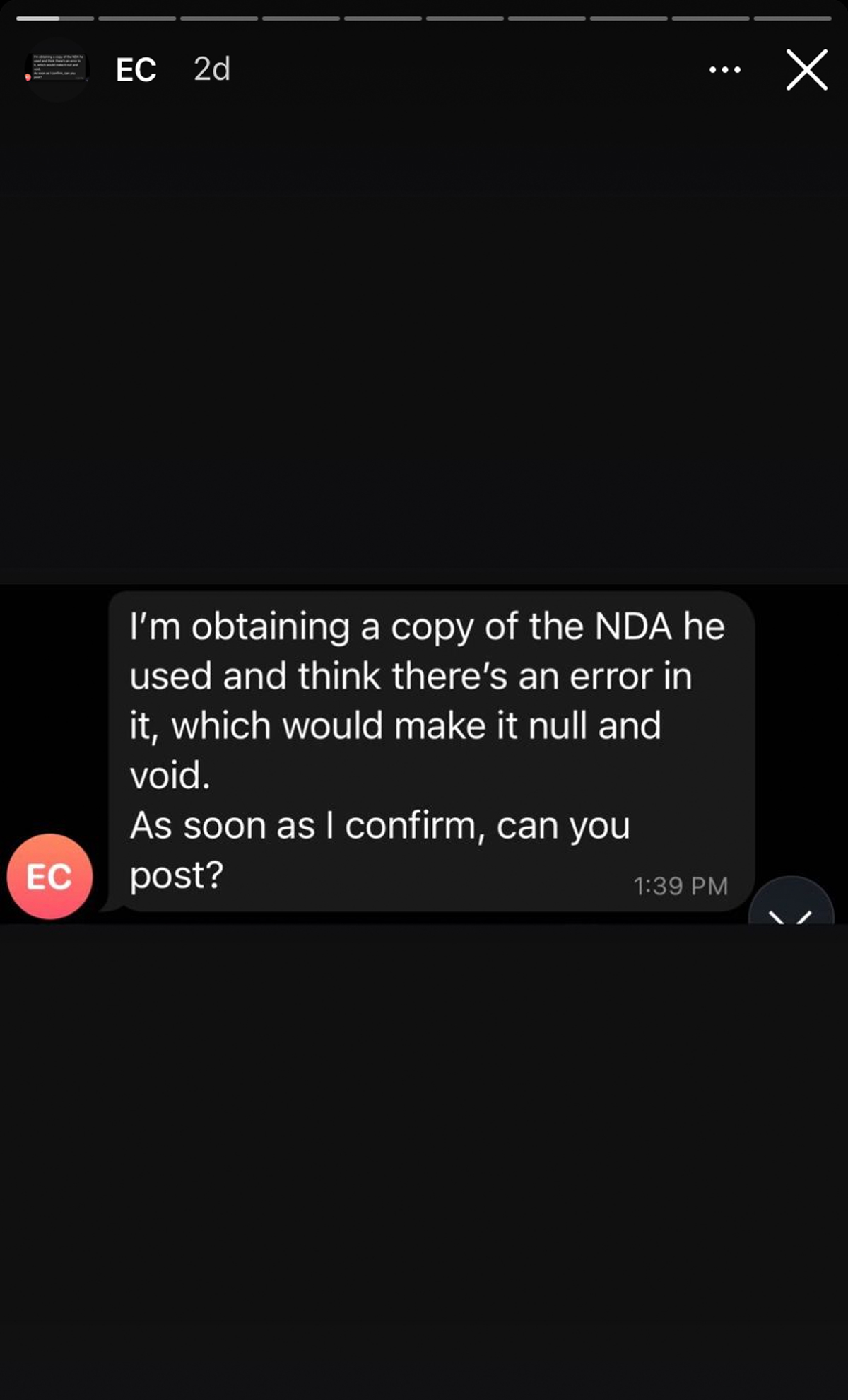 In another text, she said to Effie to “stay focused” on “getting the stories on record. Not just the internet.” When Elizabeth allegedly asked Effie if she hired a lawyer yet, the woman responded:

“I’m feeling a tad bit suicidal and don’t have time for this rn sorry.”

To which The Game Plan star then allegedly asked Effie to file a declaration:

“I really need custody of my precious children. Do you think you could make a declaration this week? It will all be private…”

Wow! If only Elizabeth could have foreseen someone known best for leaking DMs might leak her DMs…

Armie’s estranged wife went on to state in a different alleged message:

“I don’t want to pressure you, but your insight is much more in depth than the others we have.”

Elizabeth later said in these alleged messages that a declaration from Effie could potentially throw Armie in jail. The television personality also asked whether there was a chance the other victims would press charges against The Social Network star: 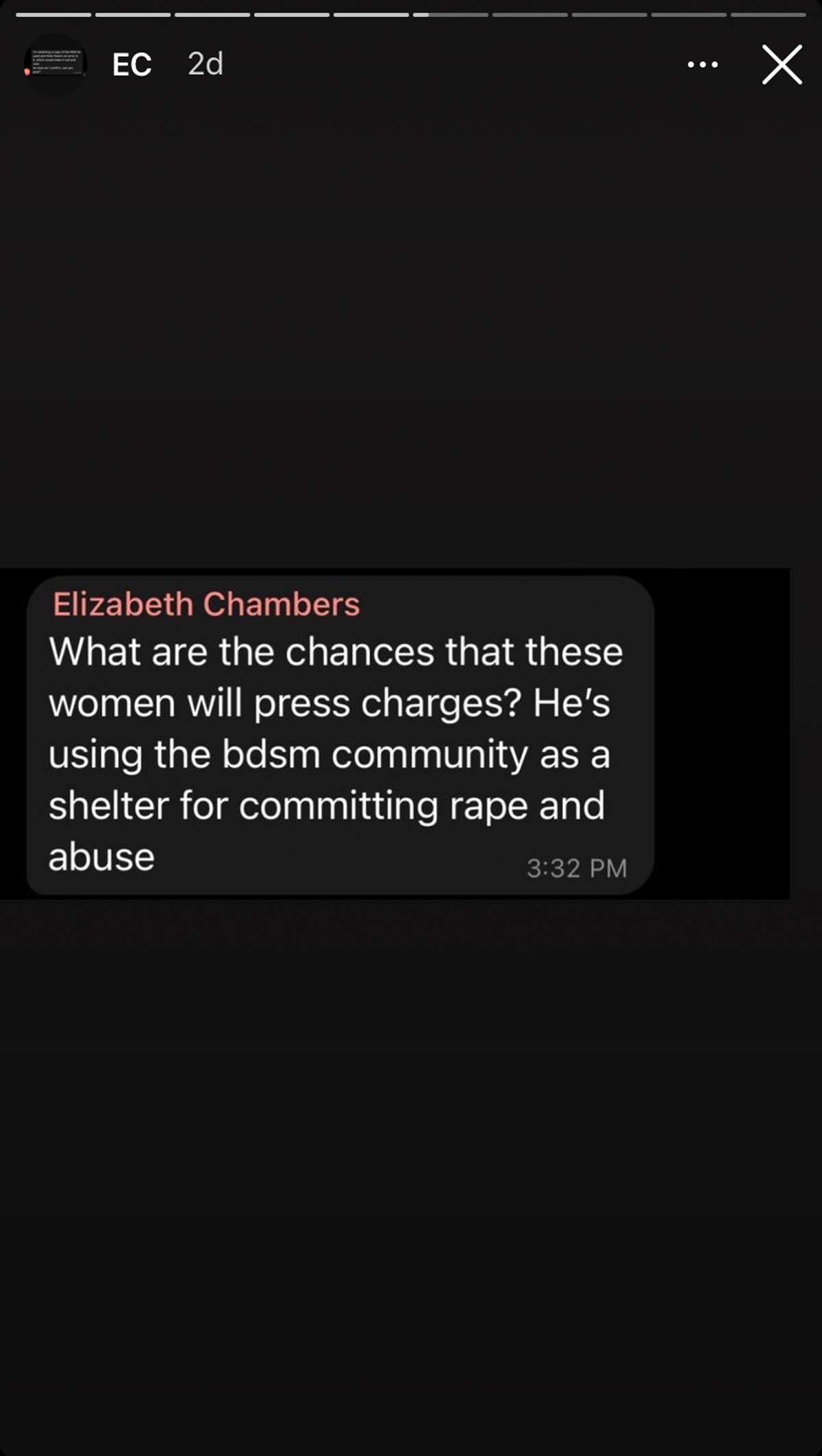 Effie concluded by directly calling out Elizabeth’s interview with E! on her Stories, saying:

“Just some things to keep in mind before anyone else keeps wishing rapists ‘healing.’”

On Friday, Effie later clarified that “the alleged NDA” Elizabeth referred to in the text messages “was allegedly signed by another alleged victim, not me,” and she never gave “her a declaration for her custody thing.” And in response to the leaked messages, representatives for Elizabeth said to People:

“Given the extent and nature of allegations that were made, Elizabeth sought to determine the veracity of those allegations. She was very sensitive to all parties involved. The safety and well-being of their children remains her priority.”

Well, this was certainly an unexpected twist in this legal matter! Reaction, Perezcious readers? Let us know in the comments (below).