It’s no secret that relations between Prince Harry and Meghan Markle and the rest of the royal family are incredibly strained.

And all that underlying tension and upset will be put under the spotlight once again this week with the release of Harry and Meghan’s Netflix docuseries this week.

Prince William and his younger brother have certainly drifted apart in recent years – but what of their wives, Princess Kate and Meghan Markle?

HELLO! takes a look back at everything Meghan has said about her royal sister-in-law.

Meghan first spoke publicly about Kate during her engagement interview with Prince Harry.

Harry and Meghan announced their engagement in November 2017

The newly-engaged couple spoke to the BBC shortly after he popped the question – and they were asked about Meghan’s introduction to members of the royal family.

“It was exciting, I mean I’ve – you know I’d been seeing her for a period of time when I – literally didn’t tell anybody at all,” Harry replied. “And then William was longing to meet her and so was Catherine.

“So, you know, being our neighbours, we managed to get that in a couple of – well quite a few times now and Catherine has been absolutely…

PHOTOS: Did Meghan Markle just have her own ‘revenge dress’ moment?

“She’s been wonderful,” Meghan interjected. “… amazing,” the Prince agreed. “As has William as well, you know, fantastic support.” 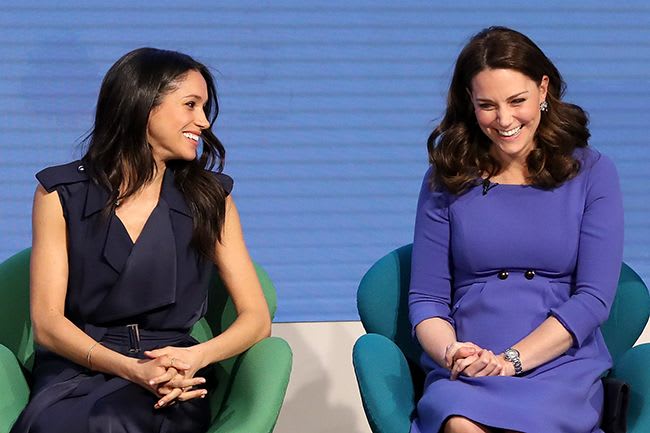 Certainly, the pair looked to be delighted to be together at their first joint royal engagement, Making A Difference Together, in February 2018 with their respective spouses, William and Harry, for the inaugural Royal Foundation Forum in London.

Harry spoke about the foursome’s bond at the time: “I think it’s really good that we’ve got four different personalities,” he said. “You know, we’ve all got that same passion to want to make a difference.

Kate and Meghan pictured together at Wimbledon

“But [we have] different opinions, and I think those opinions work really, really well [together]. Working as a family does have its challenges. Of course it does. … But we’re stuck together for the rest of our lives.” Meghan then added: “Togetherness at its finest.”

Fast forward a few years, and relations between the ‘Fab Four’ had soured.

One prevalent rumour suggested that Kate and Meghan had fallen out over Princess Charlotte‘s flower girl outfit at the royal wedding. And Meghan seemingly confirmed as much during the couple’s explosive interview with Oprah Winfrey in March 2021.

Refuting claims that she had made Kate cry, Meghan stated: “The narrative with Kate, it didn’t happen.

Relations between the ‘Fab Four’ have soured

“A few days before the wedding she was upset about flower girl dresses and it made me cry. It really hurt my feelings. It was a really hard week of the wedding. And she was upset about something, but she owned it, and she apologised. She brought me flowers and a note, apologising. And she did what I would do if I knew that I hurt someone — to just take accountability for it.”

Meghan assured viewers that she didn’t intend “to be disparaging” to Kate by sharing that story. “She’s a good person,” she added. “I think so much of what I have seen play out is this idea of polarity, where if you love me, you don’t have to hate her. And if you love her, you don’t need to hate me.”