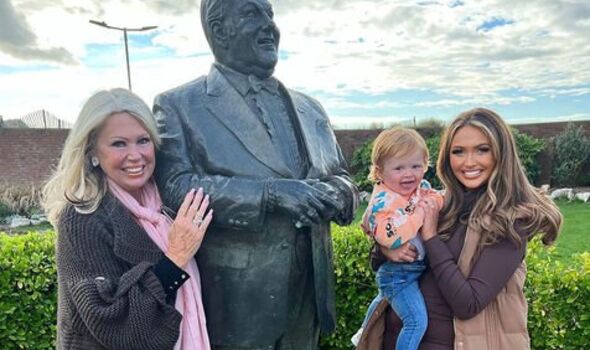 During a recent visit to the memorial to Les Dawson in Lytham St Anne’s, Lancashire, social media influencer Charlotte Dawson took to Instagram to record the touching exchange.

Alongside the picture posted on October 2, Charlotte wrote: “Seeing my dad for my birthday last week & giving him a big cuddle was the best and even better when he said, grandad.

“I’m 30 on Monday, I feel all sorts of emotions but not having my dad / Noah’s grandad here just breaks my heart into a million pieces.. on such big milestones in your life hits hard.

“But to have my little man here who is just him comforts me in so many ways..to the trolls that say nasty things about how I talk about my dad can chuff off… yes I don’t really remember him and I have to watch him on YouTube and clips and hear about him through other people.. which sucks.”

“But I’m also very lucky & blessed. But I just want my dad back.. and it helps me talking about him. So if you don’t like what I post please unfollow or block me it’s that simple.”

Les Dawson died aged 62 in 1993 after a glittering career in television and show business that spanned four decades.

His most memorable roles were in the 1980s hosting the popular quiz show Blankety Blank and The Les Dawson Show.

He married his second wife Tracy Roper in 1989 after his first wife Margaret passed away from cancer in 1986.

Tracy and Les’s daughter Charlotte was born on October 3, 1992.