Taking to his social media platform, the 48-year-old singer jokingly says that he’s ‘ushered to the front’ to pay his respects to the late Her Majesty in Westminster Hall.

AceShowbiz –James Blunt joins the queue to see Queen Elizabeth lying in state. The 48-year-old singer became one of the last people to pay his respects to the late monarch, who died on September 8 at the age of 96 following a 70-year-reign and had been lying in state at Westminster Hall since Wednesday, September 14, and waited in the queue for several hours with other members of the public on Sunday night, September 18 before entry was closed.

In a tweet, he joked, “Offered to sing, and am now being ushered to the front” During his time in the queue, James posed for a selfie with Scout volunteers, who later explained that he had “made the day” of the hard-working group as they carried out their final duty to the Queen. 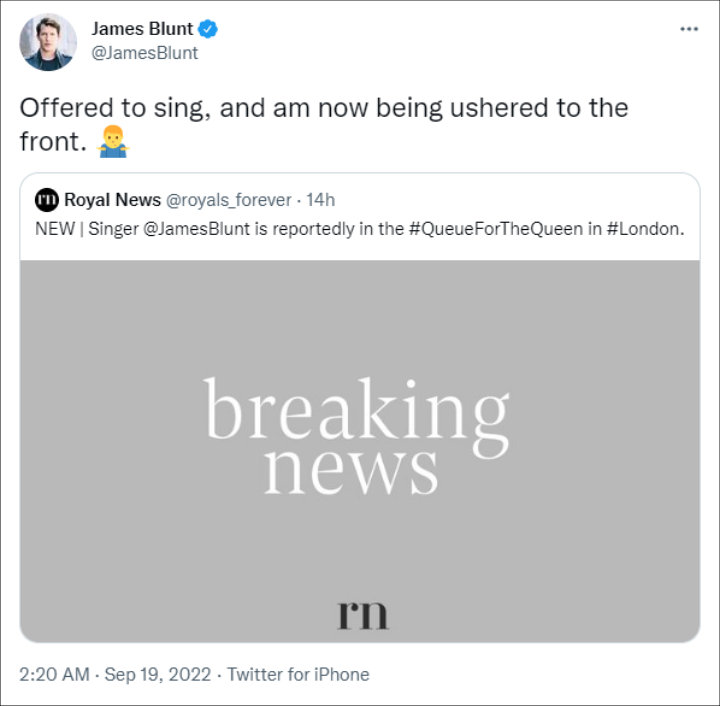 A tweet read, “Hey @JamesBlunt you absolutely made some extremely hardworking @scouts who have been volunteering and #doingtheirduty to HM The Queen’s #lyinginstate day today.” The “You’re Beautiful” hitmaker, who before his career in music served as a reconnaissance officer in the Life Guards regiment of the British Army, was joined by his wife Sofia as he queued up to pay his respects. 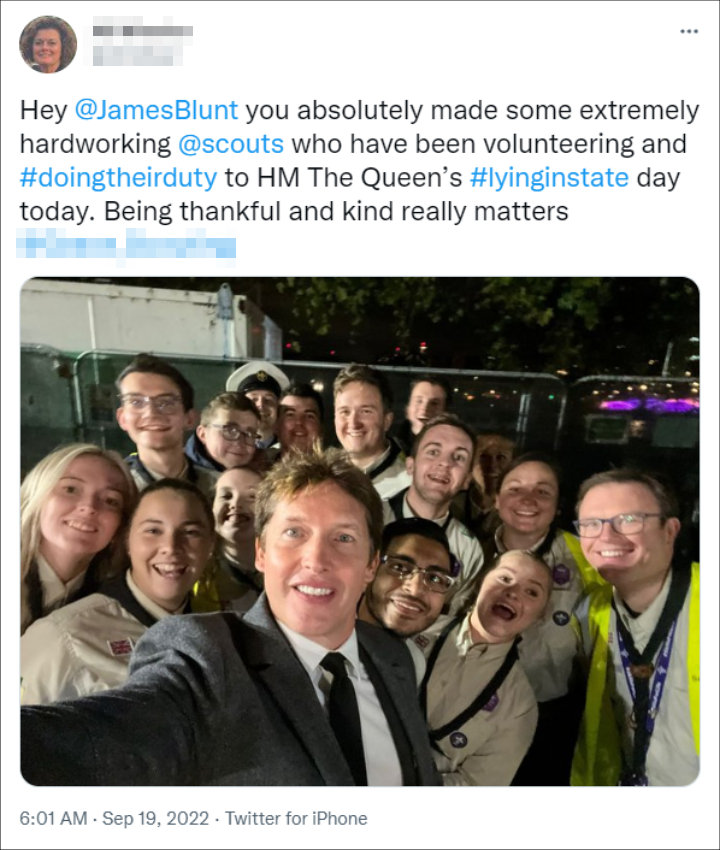 James Blunt posed for a selfie with Scout volunteers during his time in the queue.

More than 20 years ago, James stood guard of the Queen Mother, who died at the age of 101 in March 2002, lying in waiting and went on to attend the wedding of Queen Elizabeth’s grandson Prince Harry when he wed Meghan, Duchess of Sussex in 2018. Just after 10:30 P.M., entry to the queue, which had seen some 400,000 mourners gather to say goodbye to her Late Majesty and wait up to 30 hours, was permanently closed, ahead of the State Funeral on Monday.

The Queen’s coffin will leave Westminster Hall just hours before the funeral service is due to take place at Westminster Abbey at 11 A.M. The BBC will be providing full coverage of the funeral across its television channels, radio, iPlayer and BBC Sounds, with a special program on air from 8 A.M. until 5 P.M. and viewers can see the hour-long service from 11 A.M.