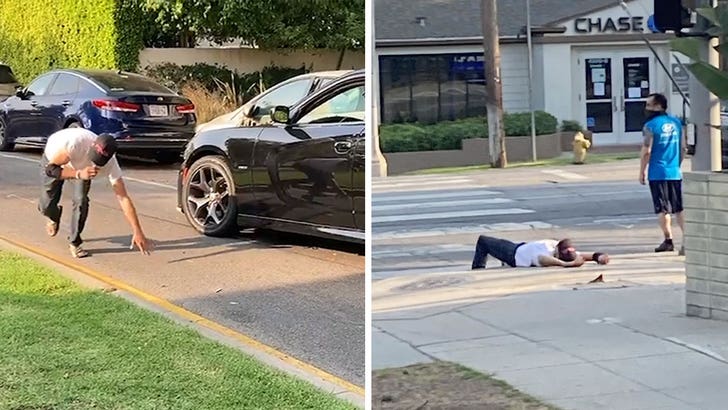 LAPD is investigating what you will see is painfully obvious in this bizarre video … a dangerously intoxicated man — who couldn’t even stand — smashed into parked cars, and yet somehow cops did NOT arrest him.

It’s all on video … the guy is stumbling and mumbling on the scene when cops arrived to see his Dodge Charger had swiped several parked cars in L.A.’s Los Feliz neighborhood on Aug. 22. Whatever he was on … he was struggling to stay upright as he spoke to the owners of the other cars and exchanged info with them. He nearly fell on his face right in front of a cop who, for some reason, seemed to ignore the behavior!!!

The witness who shot this video is stunned in disbelief as the cops tell the victims to contact their insurance … as they simply let the wasted guy walk — sorta — away. People on the scene were pissed, and with good reason.

LAPD says it’s looking into what happened here, but it seems pretty obvious. Cops asleep at the wheel … much like the Charger driver, whose car was simply towed from the scene.