Such a pleasure, to have an old friend for dinner. Inside Man (BBC1) takes our old friend Hannibal Lecter and serves up the psychopath with a side order of Sherlock.

Starring Stanley Tucci as an amateur detective on Death Row in a U.S. prison, this scintillating dark comedy spells out its intentions with macabre relish. ‘Everyone’s a murderer,’ claims Tucci, as wife killer Jefferson Grieff. ‘You just have to meet the right person.’

For Harry, a cool and trendy vicar played by David Tennant, the ‘right person’ is his teenage son’s maths tutor, Janice (Dolly Wells).

Harry is everybody’s friend, loved by the ladies who do the church flowers, and a devoted dad. If he has a fault, it’s that he’s simply too nice. He’s a combination of Cliff Richard and Fleabag’s ‘hot priest’, Andrew Scott. Surely, he couldn’t be a murderer? 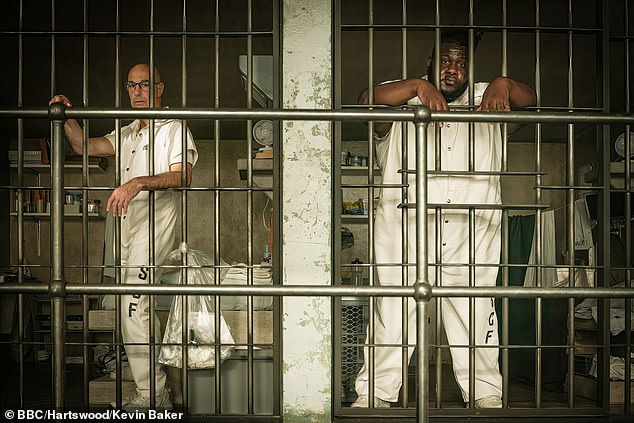 Christopher Stevens: Inside Man, which continues tonight, is convoluted, inventive and morbidly witty

She thinks the perverted videos belong to Harry’s son, Ben (Louis Oliver, Moffat’s own son in real life). Desperate to prevent Janice from going to the police, Harry shoves her down the cellar stairs. Murder is that simple.

Except it isn’t, because Janice isn’t dead, and she’s an exceptionally resourceful woman.

We met her in a set-piece scene that initially seemed to have little point. A leering sex pest on a commuter train was harassing young women, until Janice pulled out her smartphone and started filming him. Soon, all the female passengers were doing the same and the troublemaker skulked away.

What looked at first like a trite and condescending fantasy, about how women could defend themselves from sexual assault if they just stood together, had a more subtle purpose.

Thanks to a journalist in the carriage, Janice is now connected to the aptly named Mr Grieff, on the other side of the Atlantic. And as she tries desperately to escape the vicar’s cellar, his intervention might save her life.

Inside Man, which continues tonight, is convoluted, inventive and morbidly witty. It’s a suburban black comedy, the sort of tale that might be dreamed up by Roald Dahl, but it’s also a homage to Hollywood — not only The Silence Of The Lambs, but prison dramas such as Stephen King’s The Green Mile. You’ve never seen anything quite like it.

The characters in writer and comic actor Dylan Moran’s sitcom Stuck (BBC2) are familiar, but that’s the point. With his straggling mop of hair and ragged black T-shirts, Moran plays Dan, an ageing ad executive whose pension plan involves handing his redundancy money to a mate with a gambling problem. 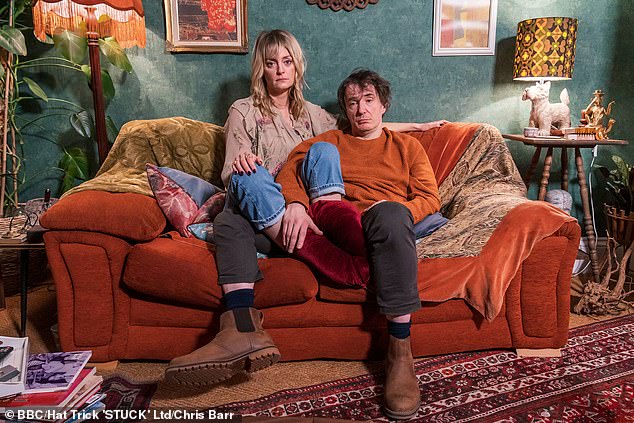 Christopher Stevens: With the characters still being sketched out, some of the jokes miss their mark. But it’s well worth a try, if only for the brilliant opening sequence

The show’s five episodes — all available on iPlayer — explore the world of a middle-aged couple whose love life is in a cul-de-sac. Morgana Robinson has the best lines, as Dan’s girlfriend Carla — desperate for a child but obliged to mother her overgrown baby of a boss instead.

Carla works for a woo-woo lifestyle brand called Loop. That’s Loop with an L. Definitely not Goop with a G-for-Gwyneth.

With the characters still being sketched out, some of the jokes miss their mark. But it’s well worth a try, if only for the brilliant opening sequence.

Via an overhead camera, we watch Dan and Carla spend a sleepless night — wriggling, sprawling, reading their phones, even getting up for a bowl of cereal. No wonder they both look wrung out.