Follow
Home » Lifestyle » It’s no Knives Out, but this murder mystery farce is still sharp

In See How They Run, that old favourite – the country house mystery – is transported to London’s West End, a giddy dollop of farce is added to the formula and Agatha Christie is set down in the middle of the action. 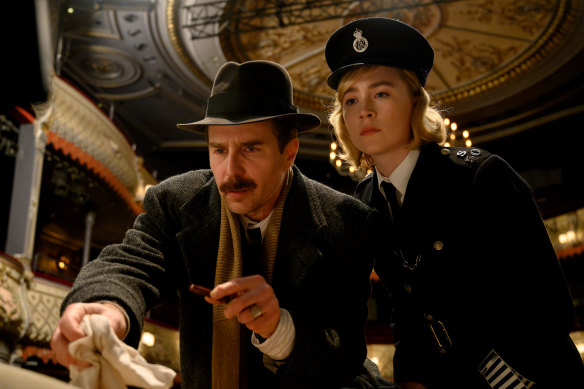 Sam Rockwell and Saoirse Ronan are on the case in See How They Run, a murder mystery farce set backstage at Agatha Christie’s play The Mousetrap. Credit:Parisa Taghizadeh

It’s 1953 and Christie’s hit play The Mousetrap has just notched up its 100th performance when celebrations are suddenly curtailed by the discovery of a dead body. Leo Kopernick (Adrien Brody), an American director who’s been hired to do a film version of the play, has been lethally battered with a blunt object.

From the start, there are plenty of candidates for the role of killer thanks to Kopernick’s all-embracing obnoxiousness. But he’s not the killer’s only target. The casualty rate begins to mount as two police investigators, Inspector Stoppard (Sam Rockwell), a laconic cynic in a pork pie hat, and his over-eager young assistant, Constable Stalker (Saoirse Ronan), struggle to keep up.

It’s hardly an original idea, as Mark Chappell’s script acknowledges in its copious references to other films and plays. In Tom Stoppard’s classic theatrical farce The Real Inspector Hound, for example, the play-within-the-play is a fictionalised version of The Mousetrap, but Chappell and director Tom George have gone a step further by loosely basing several of the film’s characters on people actually involved in the production. 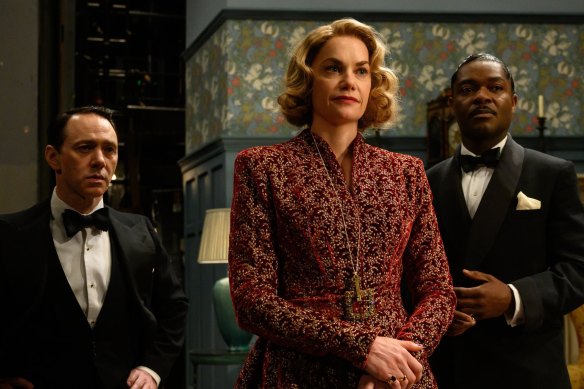 See How They Run has a stacked cast, but stars such as Ruth Wilson and David Oyelowo, pictured with Reece Shearsmith (left), get little screen time.

Shirley Henderson’s entertainingly flaky Agatha Christie may not have much in common with reality, but she’s such fun you wish she had a larger role. The same goes for the play’s star, the young Richard Attenborough (Harris Dickinson), airily luxuriating in his burgeoning career as a matinee idol.

It’s a strong cast, but it’s such a big one that few of its players get a chance to shine. David Oyelowo makes the most of some histrionic moments as a temperamental screenwriter. However, Ruth Wilson, who’s always worth watching, has no more than a bit part as the play’s hard-headed producer.

The stars of the show are Rockwell and Ronan. Rockwell, known for playing garrulous smart alecs, achieves a refreshing transformation as the dour inspector. Burdened with a drinking problem, Stoppard spends much of the film serving as straight man to his impetuous constable, but towards the end he softens and the effect is unexpectedly poignant.

Ronan is a delight. Ever alert, Stalker pursues every twist in the case yet invariably fails to distinguish a real clue from a red herring. It’s a lovely balancing act carried off with unwavering innocence and a superb sense of timing.

George’s timing is not quite as sharp. The action falters in the middle and the joke, which revolves around the vanities of the story’s cast of self-absorbed luvvies, grows stale. Consequently, the film is no match for Rian Johnson’s Knives Out (2019), the hit responsible for the big-screen revival of murder mystery spoofs. But between the laughs are some smart observations about the art and ethics of telling a story.

See How They Run is released in cinemas on September 29.