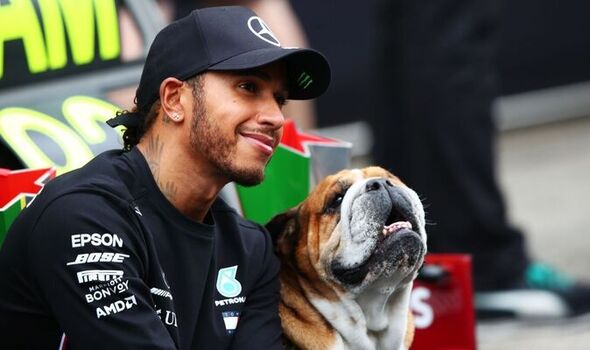 The F1 ace, 37, says his bulldog Roscoe has stopped having breathing difficulty, throat trouble and loves to exercise more since eating plant-based food. Sir Hamilton, who has won seven F1 Championships, became a vegan himself in 2017 and, when he switched Roscoe’s diet last year, the sports star faced a backlash of criticism.

But he insists Roscoe has benefited from the changes.

He said: “I decided to transition him to a vegan diet. It has changed his life.

“He now doesn’t have any breathing issues. His throat is no longer restricted, he doesn’t overheat like he did before and he loves to run. He also has no allergy issues.”

And the vegan pet food is booming, according to new statistics. One analysis says it will be worth $15 billion (£12 billion) by 2028.

Vera Baker, financial industry expert, added: “Plant-based proteins for pets are becoming popular due to an overall concern about pet health and wellness and an overarching concern about sustainability.”

The businessman said: “Formula One Champion Lewis Hamilton is echoing the voice of thousands of OMNI customers that have seen similar visible improvements in their dogs’ health including fewer allergies, better poos and a generally healthier dog.

But earlier this year, a vet warned there is not enough evidence to support feeding dogs a vegan diet.

Speaking on Good Morning Britain, Dr Rory Cowlam said: “There’s so many arguments for either side of this and there are some great points given by both guys there and I don’t personally believe there is enough evidence currently to support a fully vegan diet in dogs.

“So why can’t we reduce their meat content? You know, that’s maybe a happy medium, but I’m afraid I fall on the side of I don’t think there’s 100 percent enough evidence currently to support it.”