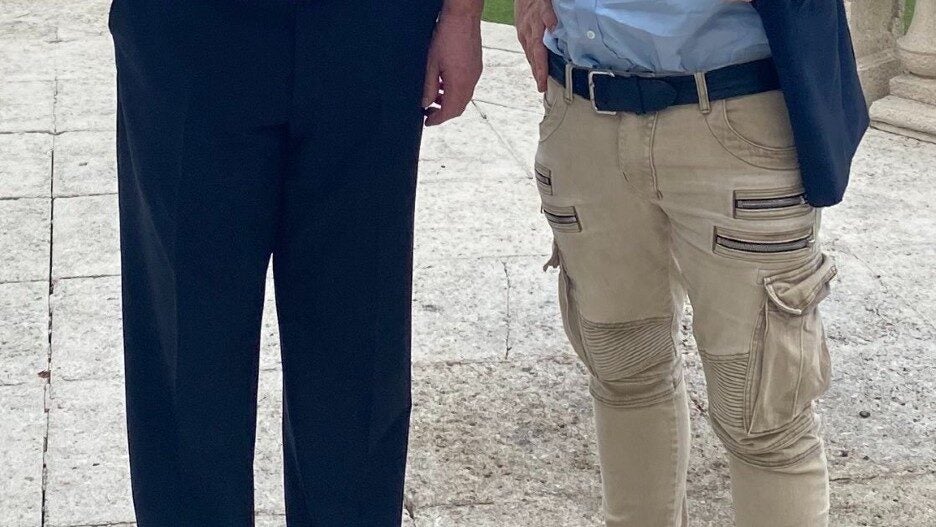 Newsmax weirdo Greg Kelly, who has made something of a career out of telling the most bizarre tall tales and falsehoods on Twitter, found himself the object of ridicule twice over on Thursday after he posted a photo of himself wearing absolutely cringe cargo pants, and then attempted to deflect mockery by claiming they were actually $1000 designer pants.

So, first Kelly tweeted out this photo with disgraced former president Trump — who just four months ago incited a deadly riot in an attempt to overthrow the government because he lost an election, in case you forgot. “Chillin’ with 45!” Kelly said, adding that he was wearing a pair of Bugle Boy jeans.

For those of you unaware, Bugle Boy was a brand of menswear that specialized in pants and jeans with elaborate stitching and often asymmetrical designs and odds numbers of pockets. They were especially popular in the late 1980s through the early 1990s but the company went out of business in 2001. They were honestly pretty cool — until they weren’t of course and yes, Kelly’s pants do look a lot like the kind of thing Bugle Boy would have sold. 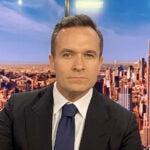 People clowned on him about it and that must have made him pretty self conscious, because 3 hours after the original tweet, he followed it up with what we assume he intended to be a definitive shut-down of his critics.

“Everyone busting my CRACKERS over the “pants”–(partially my fault because I called attention to them with the Bugle Boy comment). The truth is, they’re BALMAIN (the most prestigious brand in PANTS)–my shoes are by Ferragamo. Basically, I’m a Sharp Dressed Man. Thank you!” Kelly said.

Now first, we have no idea what “busting my crackers” means. We guess he was trying to avoid using the word “balls,” but there already exists a minced oath version of that expression, which uses the word “chops.” So who knows. In any case,

Anyway, while we would contest the assertion that wearing those pants in combination with loafers makes anyone “sharp dressed,” we do concede that Balmain cargo pants are super expensive — even an on-sale pair costs nearly a grand — and would, if true, mean that Kelly did indeed splurge like a baller on his tactical dad jeans.

Alas, it looks like Kelly’s baller dreams are just that — dreams. Because one eagle eyed tweeter noted that he appears to be wearing a cheap knock off.

While we can’t say for certain how much the pants he’s wearing cost, TheWrap can confirm that they are indeed not Balmains. (Which do, in fact, have just the one zip pocket.)

Anyway, see a sample of some of the more amusing reactions to this weird mess below:

Anchor, Clow, Greg, Kelly, Newsmax
You may also like: