Prominent Melbourne lawyer Pat Lennon, who has represented Mick Gatto and jockey Danny Nikolic among others, was found with 11 grams of methamphetamine and almost $6000 cash when he was apprehended by police last year. 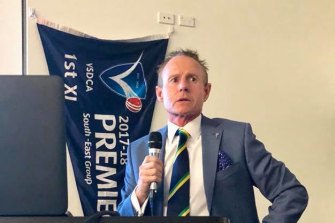 Melbourne lawyer Pat Lennon has been charged with trafficking a drug of dependence and possessing the proceeds of crime.

A police prosecutor told the Melbourne Magistrates Court on Friday that police decided to search Mr Lennon after allegedly discovering a rolled-up $20 note in his car during a random intercept in South Yarra.

The drugs and cash were found inside a leather shoulder bag in Mr Lennon’s possession, the court was told.

However, Mr Lennon’s lawyer, Malcolm Thomas, said his client would contest the charges and could argue the methamphetamine belonged to a female passenger in the vehicle, who had a history of drug use.

“It is not impossible for a person to place an item into a bag that is not theirs,” Mr Thomas said.

He told Magistrate Kate Hawkins that Mr Lennon’s female associate should face cross-examination if the matter proceeded to trial, before indicating he also had concerns about the legality of the search by police on July 13 last year.

Magistrate Hawkins adjourned the case until September 6, while Mr Lennon is permitted to continue practicing law at his Queen Street firm, which specialises in commercial law, family law and personal injury law.

His firm represented Mick Gatto in an unsuccessful defamation claim against the ABC, which was the subject of a Supreme Court trial in July last year. Mr Lennon has also acted for former jockey Danny Nikolic.

A former president and long-time sponsor of the Caulfield Cricket Club, Mr Lennon is also heavily involved in the horse racing industry, having a stake in several thoroughbreds.

A father of two, Mr Lennon lives in a North Caulfield mansion worth more than $6 million, which has recently undergone a major renovation and includes a tennis court and indoor swimming pool.

A spokesman for the Victorian Legal Services Board, which is responsible for the regulation and oversight of legal practitioners, has previously declined to make any comment on the criminal charges against Mr Lennon.

Almost, found, Ice, lawyer, With
You may also like: