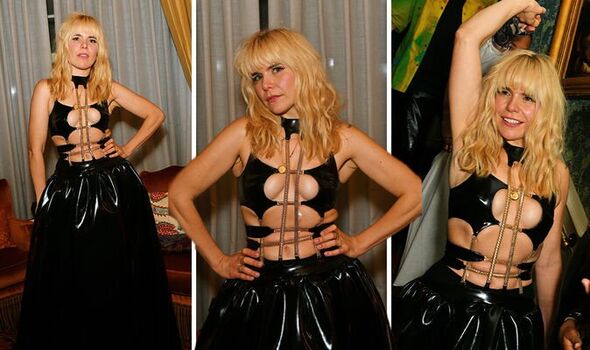 Paloma Faith turned heads as she arrived at the first anniversary bash for ES Magazine in London last night.

Paloma Faith, 41, left little to the imagination as she decided to go braless in a PVC material ensemble for the prestigious event.

The Only Love Can Hurt Like This hitmaker sported a risqué cut-out top, featuring gold chain detail, exposing her sensational gyn-honed figure.

Paloma’s dress fell to her feet and drew in at her waist, forming a PVC godet skirt, with more gold detail running up the singer’s torso.

She styled her bleach blonde waves in a light wave, with a full fringe framing her face.

Paloma opted for a light natural make-up palette, paired with a peachy lip, not distracting from her statement number.

Paloma Faith showed off her incredible sense of style

Not wanting to distract from her jaw-dropping dress, Paloma Faith went for a neutral make-up palette paired with a peachy lip.

Paloma Faith styled her bright tresses in a light wave

Paloma Faith is known for her statement fashion and last night was no different. The singer styled her bright blonde tresses in a light wave, with a full fringe framing her face.

Paloma Faith has two children with her husband Leyman Lahcine. She gave birth to their daughter in December 2016, and their second daughter in February last year. The pair married sometime in 2017.

During an episode of The Voice UK, Paloma Faith claimed she once read an article that called music artist KT Tunstall old, despite being only 27 at the time. As she was only 27 herself Paloma felt pressure to lie about her age when trying to acquire a record deal, and claimed to be 23.