Prince Harry and Meghan Markle have arrived in the UK for their first visit since attending the Queen’s Platinum Jubilee in June.

SEE: Meghan Markle dressed as Princess Diana for The Cut interview – did you spot it?

HELLO! understands that the couple landed on Saturday morning after shunning the use of a private jet and flying commercial. Their children, Archie and Lilibet, did not appear to be with them.

It was confirmed in August that Harry and Meghan would be returning to British soil, with a spokesperson for the couple saying at the time: “Prince Harry and Meghan, The Duke and Duchess of Sussex, are delighted to visit with several charities close to their hearts in early September.”

The couple will also travel to Manchester for the One Young World Summit, an event that brings together young leaders from more than 190 countries, on September 5. The Duchess of Sussex is a counsellor for the organisation, alongside Justin Trudeau, Sir Richard Branson, and Jamie Oliver, among others.

MORE: The Queen interrupts summer break with heartfelt message: ‘I am deeply saddened’

During their stay, Harry and Meghan will briefly visit Germany for the Invictus Games Dusseldorf 2023 One Year to Go event, before returning to the UK for the WellChild Awards on September 8.

Their visit to the UK will be the first time they have been back in the country since the Platinum Jubilee celebrations in early June. 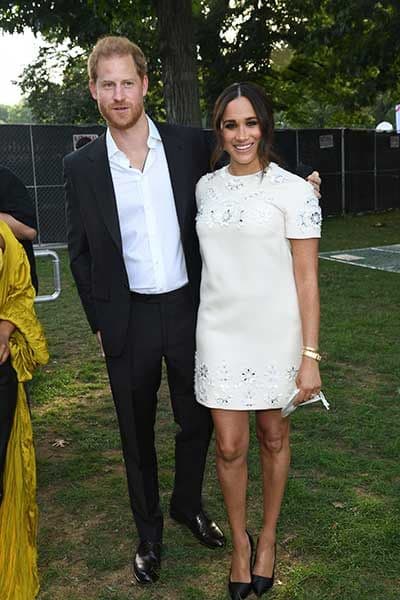 Harry and Meghan are on a brief visit to the UK

It remains to be seen whether they will be able to spend time with the Queen during their time in the UK. The monarch is currently on her summer break at Balmoral, having travelled to Scotland in July.

Their return comes just days after Meghan’s wide-ranging interview with The Cut in which she said it takes “a lot of effort” to forgive and hinted that she can “say anything”.

Meghan gave a tell-all interview to The Cut

In the interview by Allison P. Davis for The New York Times’ magazine, Meghan said that “just by existing” she and Harry were “upsetting the dynamic of the hierarchy” before they stepped down as senior working royals.

Meghan also gave an insight into their LA home, Archie’s school and the fact she may start up her Instagram account once more.