Savannah Chrisley revealed that her grandmother, “Nanny” Faye Chrisley, is recovering from a painful injury. In an Instagram video, the “Chrisley Knows Best” star was demonstrating how to use products from her Sassy by Savannah cosmetics line when she broke the distressing news about Nanny Faye.

The ninth season of the Chrisley family’s reality series, “Chrisley Knows Best,” premieres August 12 on the USA Network. Entertainment Tonight shared the season synopsis, and it looks like viewers will get to see plenty of Nanny Faye’s famous face-offs with her son Todd Chrisley. This is because he and his wife Julie are going to crash with her while they look for their “dream home.” Nanny Faye always does an excellent job of making sure that there’s not a dull moment when she’s around, and she’s a real pro at stressing Todd out. She’s felt up a bodybuilder’s muscles in front of him at Venice beach, made him believe that she got a huge tattoo on her chest, and pranked him by making him think that she owed some very angry people $30,000.

Nanny Faye also has an adventurous side that fans love — she’s escaped the watchful eye of her grandson Chase to go gamble and learned a few sexy dance moves during a burlesque class. However, according to Savannah, she wasn’t doing anything really wild when she got hurt. 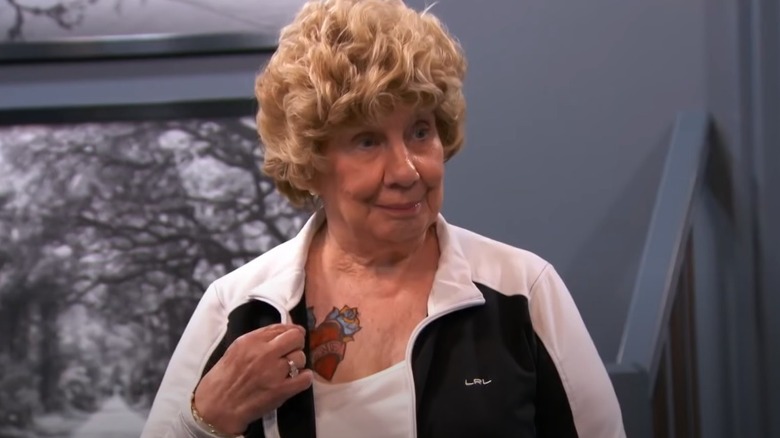 Savannah Chrisley told her Instagram followers that Nanny Faye is “alive and well,” but she’s recovering from a fall at home. “I mean, she did break two of her ribs,” she said. While Nanny’s fans might love her youthful spirit, Savannah revealed that it contributed to her injury. “Nanny was trying to act like she was very young and wants to be independent,” she said. “She, like, leaned over her sofa, and somehow broke two of her ribs. I have no earthly idea, y’all.”

This isn’t the first time that Nanny Faye has gotten injured at home. On an episode of “Chrisley Knows Best,” she blamed her son for a foot injury that required her to wear a medical boot and walk with a cane. “When you kept calling me, I had to get up and answer before you sent the police after me,” she said. “So then, I scooted from the table and I twisted my darn foot.” Todd Chrisley responded by telling his mom that she was going to have to move in with him, and he said that he was going to ban her from drinking, gambling, and “moving around.” Hopefully, Todd isn’t driving her too crazy as she recovers from her rib injury.

Mark Wahlberg watches his kids sports games from his car