The ‘Shang-Chi and the Legend of the Ten Rings’ actor calls Twitter ‘a slanderous place’ in response to allegations that he once compared paedophilia to being gay in his Reddit posts.

AceShowbiz –Simu Liu isn’t safe from critical social media users while he has been gaining fame lately with his film “Shang-Chi and the Legend of the Ten Rings“. Just as he is riding high with the success of the Marvel movie, the actor has been dragged on Twitter for his old problematic posts.

On the blue-bird app, people have re-posted his years-old Reddit posts in which he allegedly compared paedophilia to being gay. In one of the offensive posts, he shared his experience of doing research for his role as a paedophilia and in the end he grew sympathetic with anyone “who is born with those urges.”

In another post, he suggested that paedophilia existed on “spectrum” like homosexuality. “Anybody who jerks off to pictures of an 18 y/o and turns around and says all pedophiles ought to be killed is a f***ing hypocrite IMO,” so the Canadian star allegedly penned.

The Reddit account has since been deleted and all posts were scrapped, but screenshots of his posts have been circulating online, enough for Simu to earn a lot of backlash. Noticing this, the 32-year-old hit back at Twitter users who attempted to bring him down.

The China-born hunk took to his account on the micro-blogging site to respond to the allegations, writing, “Twitter is a slanderous place sometimes, and it feels good to shut down trolls and bad faith actors who want to drag your name through the mud.”

“Just a reminder that I do not ever EVER advocate for anything other than positivity,” he claimed. “Positive cultural pride, positive iterations of Asian masculinity and femininity – that means WE DON’T PUT EACH OTHER DOWN.” 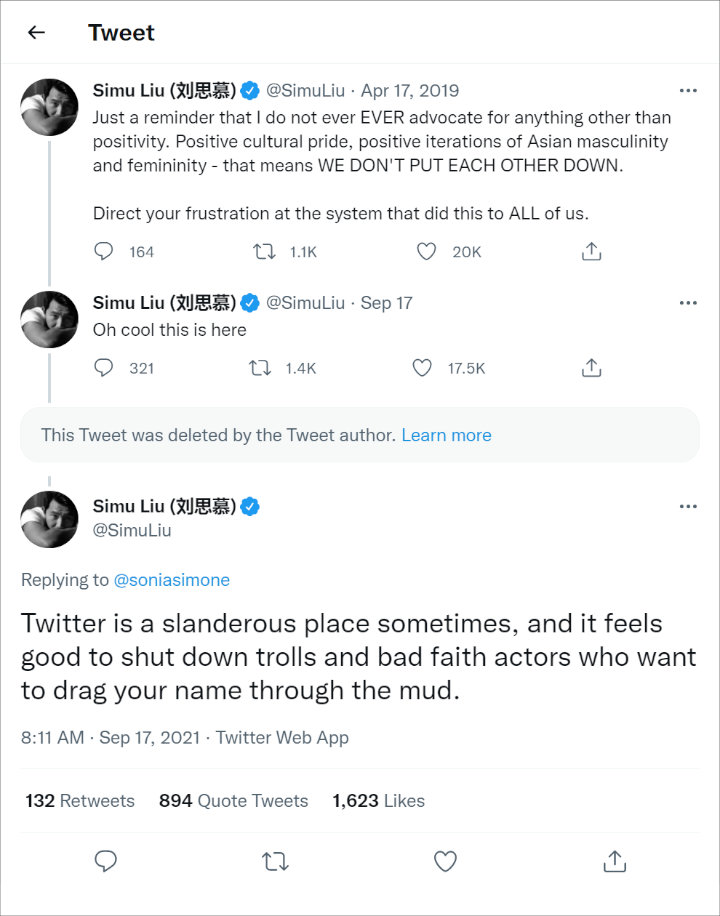 Simu Liu hit back at haters dragging him over his old offensive posts.

Refusing to apologize, Simu seemed to hint that there were more offensive posts he made in the past, but also reminded that “mentalities evolve.” He added in a separate tweet, “DISCLAIMER: If you dig back far enough, I’m sure you’ll find a more immature version of me who gave in to anger and hate. It doesn’t make me a hypocrite; it makes me a human being. Mentalities evolve. We shift and we grow. And I want us all to grow the right way.”

Clap Back, Drag, Haters, Simu Liu
You may also like: