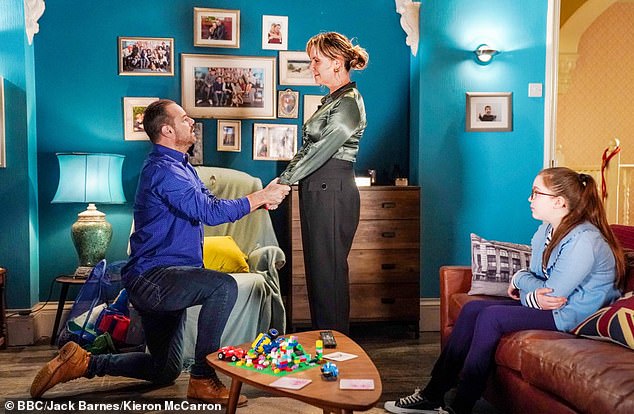 Some people set their sights very high and reach for the stars; others set them so low, they need a torch to find them.

Janine is of the latter persuasion. I mean, come on: Mick, the Vic and an unplanned pregnancy – that’s a triple whammy of disappointment.

To Janine, though, after getting engaged, she now has everything she wants and couldn’t be happier than when Mick goes down on one knee with a proper proposal. Whether he will be able to get back up again remains to be seen, for fit he is not.

Linda is, of course, unhappy about the union, but drops news about the engagement to Shirley, who’s furious. Which is worse: having Linda as your mother-in-law, or Janine as your daughter-in-law?

EastEnders’s Charlie Brooks says her character Janine will be desperate to get Mick down the aisle. ‘She wants the white dress and that ring on her finger. She wants it done quickly.’

That’s going to be some wedding reception. Beware of low-flying fruit cake.

Looming over the celebrations is viewers’ – and Scarlett’s – knowledge that Janine faked Linda’s driving accident to stop Linda and Mick getting back together. Mick’s not happy when Alfie questions whether Janine is the right woman for him, but will Mick listen?

He may already be having doubts and finds it difficult to hide his annoyance when Alfie buys Linda a drink when her blind date bails on her. Did I not suggest last week that Linda should make a play for Alfie? She could do a lot worse – and has.

It’s chaos amongst the Panesars, who are reeling from the revelation that Ravi is Nish’s son. Will this be enough to drag an expression from Kheerat’s permanently emotionless face?

True, it’s hard for anyone to raise a smile when they’re dating Stacey, but come on, what’s it going to take – electroconvulsive therapy?

The high drama gathers pace when Nina hints to DS Manners that Suki might have murdered Ranveer. Ever the incompetents, that’s all it takes for the cops to arrive and arrest Suki, and Kheerat is quick to point the blame at Ravi.

But with Nina in possession of the doctored USB, are Suki’s days numbered? 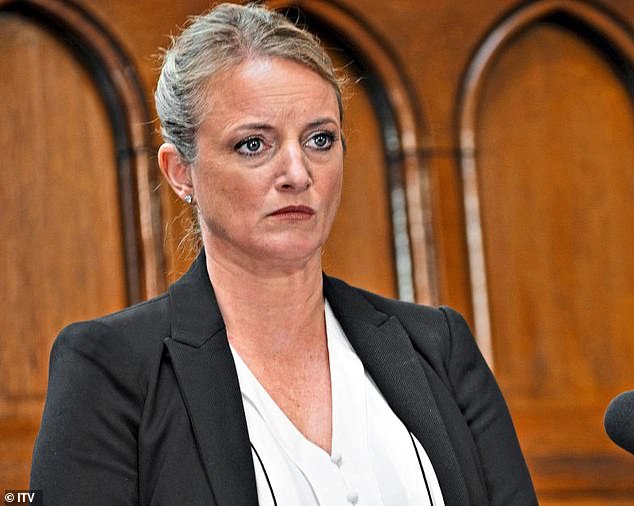 Naomi’s barrister runs rings around Nicola (pictured) in Emmerdale, as the trial beings. Naomi is fearful she will end up in prison for a crime she didn’t commit

Trials in Soapland are always entertaining, not least because they lack a resemblance to real life courtrooms. Will Naomi’s barrister prove the exception to the rule as she runs rings around Nicola on the stand?

Say a prayer for poor Nicola

Would Emmerdale’s Nicola (Nicola Wheeler) have got together with Charles had his nasty daughter Naomi not got in the way? Don’t forget Nicola was lusting after the vicar when he arrived! What is it with sex and these village vicars? Can’t they be content with throwing holy water around?

Charles and his family certainly opened up many new storylines for Wheeler, who enjoys the ‘different energy’ that new cast members bring: ‘It keeps you on your toes as an actor.’

Well, a Chihuahua could run rings around Nicola because, as the lawyer shows, her case lacks credible evidence. Naomi is fearful she may end up going to prison for a crime she didn’t commit, but after an altercation with Saskia in the toilets, will the latter’s threats come to light?

The scenes are not without humour, as you would expect with Bernice accompanying her half-sister to court. We should be grateful for the Muppet Show-style entertainment.

Vinny’s on a downer after collecting Liv’s ashes and realising she’s never returning. The only people regretting that more than Vinny will be local off licences, where Liv was number one customer.

Chas is preparing to give Faith a good send-off after dropping her ashes into the factory, where they’re going to be made into a firework. What happened to the days when people were happy to say goodbye with a few canapés and a glass of fizz?

At least the show manages to go a week without a death or car boot kidnapping. Instead, we have Nate admitting to Naomi that he slept with Tracy. Fear not; she probably didn’t notice.

CORONATION STREET: WILL HOPE’S PAIN PUSH HER OVER THE EDGE? 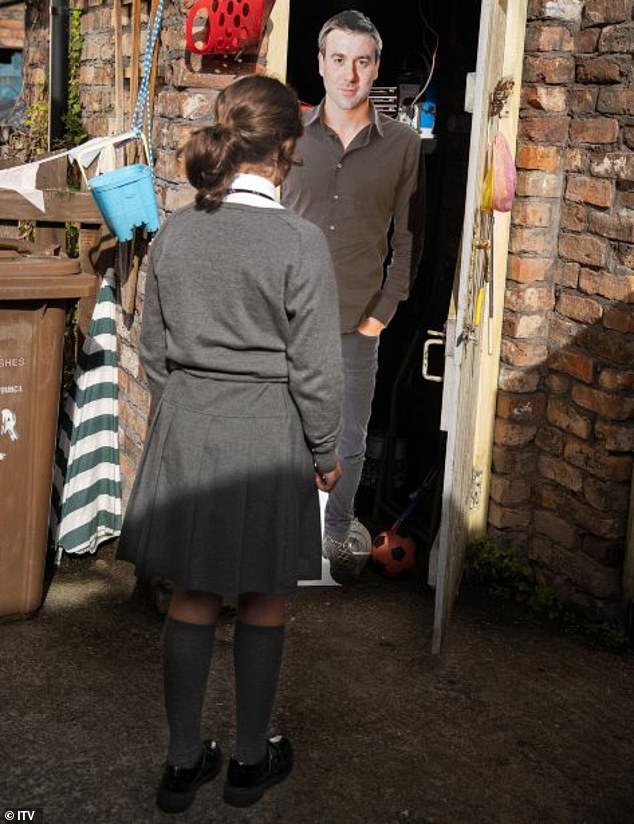 When did Tyrone become the Tyson Fury of Weatherfield? Not content with punching Nick, he now hits the writer of the John Stape book.

Alas, this ends up bringing publication forward, and when a video of the assault goes viral, Tyrone is arrested. Hope then announces she wants to stay with Chesney, and gosh, you’ve got to be desperate to want to stay there.

There isn’t even a spare laundry basket for a bed.

In Fiz’s failed attempt to hide the book’s publicity, Hope comes face to face with a cardboard cut-out of her serial killer father Stape in the outhouse. Still, I’d rather that creepy event than coming face to face with Hope in an outhouse; when will they get that kid the help she so desperately needs?

Goodness knows what this latest trauma will do to her. Will it push her over the edge? Doubtful.

There are no more left – she’s a human lemming. Huge credit to Isabella Flanagan, who plays her, as it’s not the easiest of roles.

Intent on tracking down Fern, who framed her for the jewellery robbery, Bernie comes face to face with Howard, Fern’s former husband, who reveals she’s a con artist. Yer don’t say.

Will he help Bernie in her endeavours? At least there’s someone who finally recognises that the women look nothing like one another.