Five lions escaped from their enclosure because the fastenings failed on a ‘lion-proof’ mesh fence used to secure the animals, Sydney’s Taronga Zoo has confirmed.

The big cats broke free at the zoo early on Wednesday morning while children from three schools had been camping overnight in tents as part of the ‘Zoo Snooz’ experience.

It was also revealed two boys from one school were reported missing at a roll call at the time the lions escaped, after teachers and students had scrambled to safe spaces. 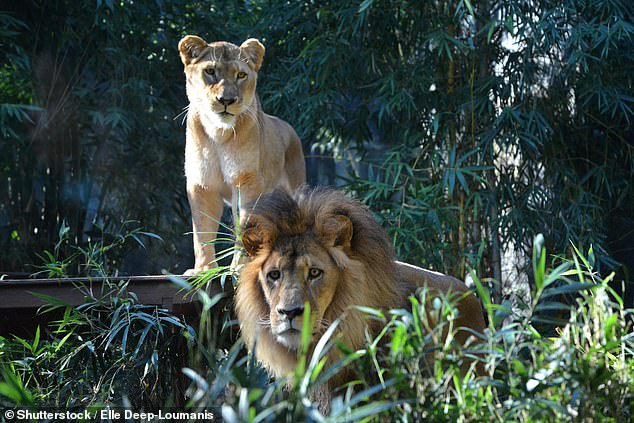 The lions will remain in a back-of-house area and appear to have no adverse reaction to the incident (pictured, Taronga lions)

Zoo staff then risked their lives searching in the grounds for the children, before the pair were found in a bathroom.

They had become separated from their class during the ‘code one’ emergency – the zoo’s most urgent alert warning of a dangerous animal on the loose.

It was activated shortly after 6.30am, when the five lions were first spotted outside their main exhibit – with only a two-metre high fence separating them from the rest of the zoo.

Children and teachers were about to start their day when the alarm rang through, heard by residents in the surrounding area. 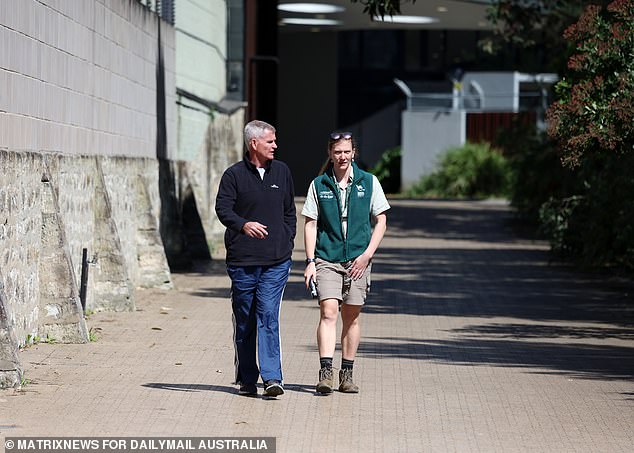 ‘Our staff reacted in a highly professional way to the incident and resolved it quickly,’ a zoo spokeswoman said (pictured, staff at the zoo on Wednesday)

Zoo workers escorted them to designated safe places, where it was discovered one student had not answered the roll call.

Staff left the safe house and scrambled through the tent lines and bathrooms before two boys were located.

They were then escorted to safety ‘within minutes’, rejoining the others at the Backyard To Bush house.

‘Our staff reacted in a highly professional way to the incident and resolved it quickly, including the process of moving guests to a range of designated safe houses,’ a zoo spokeswoman said.

‘We thank our staff and also the exemplary co-operation of guests.’

Children from schools in Cammeray, Nowra Hills and Old Bar public had camped overnight on Tuesday.

Helicopter footage on the day showed zookeepers and dozens of police inside the lion enclosure inspecting what appeared to be a hole in the fence.

The spokeswoman said the opening in the fence had been secured and the lions would not be back in their main exhibit while the zoo awaits ‘further engineering advice’.

‘This advice will guide us on any further repairs or reinforcements needed,’ she said.

‘We would then seek approval from the Department of Primary Industries before returning the lions to their main exhibit.

‘Our absolute priority is to ensure the safety of our people and guests and the welfare of our animals.’

She said the exact timing of the repairs would depend on what advice the zoo is given.

Meanwhile, the lions will remain in a back-of-house area and appear to have had no adverse reaction to the incident.

They have since been identified as father Ato and cubs Kahri, Luzuko, Malika and Zuri, who are five of the seven African lions kept at the African savanna site.

‘As soon as Taronga’s emergency procedures were enacted, keepers recalled the lions, with all but one cub — which was safely tranquillised — returning to their dens.’ 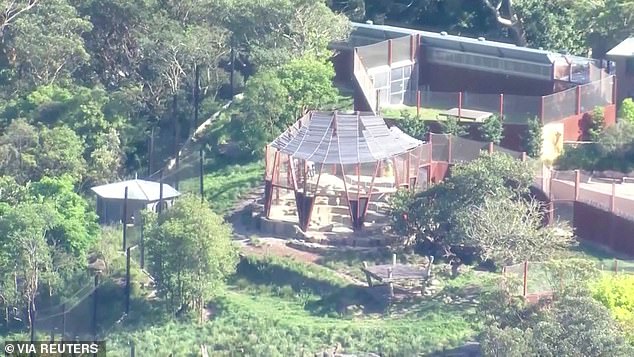 The animals have since been identified as father Ato and cubs Kahri, Luzuko, Malika and Zuri, who are five of the seven African lions kept at the African savanna site (pictured, the enclosure after the lions were contained)