Vanessa Hudgens, 32, isn’t a fan of bras. “Free the nipple! Bras are uncomfortable,” she said in an interview with Glamour UK magazine, which is part of their Dec. 2021 cover story. “If you feel more comfortable and ready to take on the world in a bra, then by all means wear one. But for me personally, they’re just not comfortable. I don’t want to feel restricted,” the actress added.

The High School Musical alum went on to add that she thinks attitudes towards the undergarments are changing, especially as styles of dress evolve. “Women used to have to be more covered up,” she said to the publication. “And I feel like it’s a lot more accepting of women to express themselves how they feel fit,” she also said.

The interview accompanied Vanessa’s cover, which was shot by Mike Rosenthal. The former Disney star looked ready for a glam New Year’s Eve in a strapless silver dress by SportMax, paired with a black glove and tights. Her makeup, by Allan Avendano, added to the evening vibe with a sultry dark burgundy lip and smokey eyeshadow. In another look, Vanessa stunned in a black sequin gown by Alexandre Vauthier while sitting in a bathtub.

“Someone say the holidayssss?” Vanessa teased in a caption via Instagram, sharing another outtake from the shoot — this time in a suave black blazer dress. She also shared a snippet of herself running down a hallway in the gorgeous Alexandre Vauthier gown!

Vanessa Hudgens — Pics Of The Actress 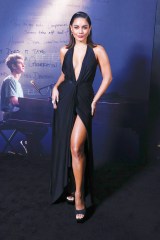 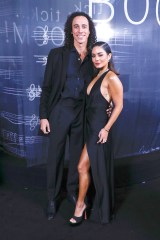 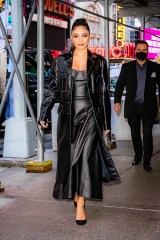 In the interview, Vanessa also opened about the challenges of “defining” herself because there are “so many different versions.”

“There’s the version of myself that is the most comfortable at home in my pajamas with my girlfriends, a glass of wine, skipping around listening to music, but then there’s another version that feels most me when I’m done to the nines and my face is beat and my hair is snatched and I’ve got a dress on that is ready to stop traffic,” she said while promoting her Netflix film Tick, Tick… Boom!