It was the night that changed Alice Sebold’s life forever. Anthony Broadwater’s too.

In May 1981 Sebold was a 17-year-old student at Syracuse University in upstate New York. While walking home through a park near the university Sebold, who is white, was brutally attacked and raped.

Five months later while walking down the street, Sebold passed Broadwater, a black man. She believed she had identified her attacker. “The black guy I could see only from the back, but I was hyperaware,” Sebold, who would later become a best-selling author, recalled in Lucky, a memoir of her rape and its aftermath published in 1999. “I went through my checklist: right height, right build, something in his posture, talking to a shady guy.” 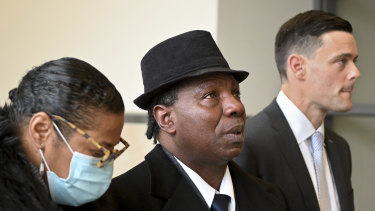 Anthony Broadwater, centre, spent 16 years in jail for rape but last week had his convictions overturned by a New York judge.Credit:AP

When Broadwater approached her and asked if they had previously met, Sebold became convinced he was the man who had raped her. She called the police, who arrested Broadwater and later placed him in a line-up alongside four other men. Sebold identified a different man in the line-up as her attacker – an early warning sign that prosecutors, convinced they had found the rapist, ignored. Sebold later identified Broadwater in court and a now discredited method of microscopic hair analysis linked him to the attack.

Broadwater was found guilty and would spend 16 years in jail. Sebold went on to global renown after publishing The Lovely Bones, a critically acclaimed 2002 book about a rape-and-murder victim that was later made into a film by director Peter Jackson.

The problem was that Broadwater, as a New York court made official last week, was not Sebold’s attacker. Gordon Cuffy, a judge on the New York Supreme Court, overturned all of Broadwater’s convictions, including first-degree rape and five related charges. Broadwater will no longer be listed as a sex offender. 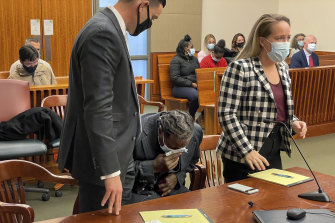 Following the decision Broadwater said recognition of his innocence had been a long time coming. After being released from prison in 1999 he said he was socially ostracised because of the conviction.

“On my two hands, I can count the people that allowed me to grace their homes and dinners, and I don’t get past 10,” he said. “That’s very traumatic to me.”

After a week of silence, Sebold this week released a statement on the blogging platform Medium in which she apologised to Broadwater for wrongly identifying him. While she will forever be the victim of a horrific rape, she acknowledged the role she had played in victimising an innocent black man.

“I am grateful that Mr Broadwater has finally been vindicated, but the fact remains that 40 years ago, he became another young Black man brutalised by our flawed legal system,” she wrote. “I will forever be sorry for what was done to him.” 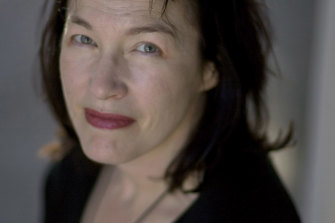 Alice Sebold apologised for “the role she played” in the jailing of Anthony Broadwater whom she accused of rape.Credit:Lynell George/Los Angeles Times

She continued: “My goal in 1982 was justice – not to perpetuate injustice. And certainly not to forever, and irreparably, alter a young man’s life by the very crime that had altered mine.”

The consequences of Broadwater’s exoneration continue to cascade. Scriber, the publisher of Lucky, has pulled the memoir from shelves as Sebold examines how she can revise the text. And a planned film version of the book has been scrapped.

Without that now-abandoned film adaptation, it’s unlikely that Broadwater would have been exonerated in the first place.

As executive producer of Lucky, Timothy Mucciante’s job was to bring Sebold’s book to the big screen; instead, he ended up killing off the movie and helping to exonerate Broadwater.

While working on pre-production of the film, Mucciante began to ask troubling questions about Sebold’s story. He never doubted that the rape occurred but began to doubt the legitimacy of the process that put Broadwater in jail.

“I began to sense that the portions of the book that dealt with the arrest and subsequent trial of her attacker were not credible,” Mucciante wrote this week in an opinion article in The Los Angeles Times.

“For example, in the book when Sebold identifies the wrong man in the police line-up, she wrote that an assistant district attorney tells her that the men in the line-up ‘really worked a number on you’. That remark didn’t ring true to me. I discussed my concerns with some of the production team and was assured that Scribner, the publisher of the book, had thoroughly vetted and fact-checked it before its publication.”

In June Mucciante was terminated from the project over what he said was a financing dispute. While not exactly sure why, he continued to feel troubled by Sebold’s story and hired a private investigator to dig into it. After looking into the evidence (or lack thereof) against Broadwater, the private investigator and Mucciante became convinced that Broadwater was innocent.

They took their findings to a lawyer who agreed there was a strong case that Broadwater had been wrongfully imprisoned.

Broadwater had previously unsuccessfully appealed his guilty verdict four times, three while in prison and once after his release.

This time it was different, as the local district attorney, William Fitzpatrick, joined the defence team’s motion to vacate Broadwater’s conviction. He noted that witness identifications of strangers are often unreliable when people are identifying a witness of another race – particularly those that cross racial lines, are often unreliable.

“This should never have happened,” Fitzpatrick said of Broadwater’s guilty verdict.

After Sebold’s Medium post this week, Broadwater told local Syracuse newspaper The Post-Standard that he accepted her apology. “It comes sincerely from her heart,” he said. “She knowingly admits what happened. I accept her apology.”

According to Mucciante, Broadwater intends to sue Sebold and her publisher.

Instead of making the fictionalised film version of Lucky, Mucciante is now working on a documentary about how Broadwater came to be wrongly imprisoned. Its title: Unlucky.