It’s been four years since the world lost Anthony Bourdain. And now a new biography is rubbing salt in the wound — and it’s doing it with receipts, apparently.

In anticipation of the release of Charles Leerhsen‘s Down and Out in Paradise: The Life of Anthony Bourdain on October 11, excerpts are hitting the web — and they’re rough. It’s important to note before we continue that this is already an extremely controversial book. Bourdain’s brother, Christopher Bourdain, says it’s full of inaccurate info and even tried to block its publication. On the other hand, the No Reservation host’s estranged wife, Ottavia Busia, seems to approve.

What the very unauthorized biography does seem to have is real data — as in from Bourdain’s computer and phone. Leerhsen has included very sensitive computer data and text conversations from the Kitchen Confidential author’s final days, including those with his final paramour, Asia Argento.

He and the actress/filmmaker were a hot item in the last two years of Anthony’s life. After his death by suicide in June 2018, she mourned on social media. In the weeks following, some potential problems in their relationship became public, namely that she had been photographed with French journalist Hugo Clément, apparently cheating on the late TV host. She addressed the allegations by saying he had “cheated” on her, too — but that “wasn’t a problem for us.” The text messages obtained by Leerhsen seem to say different.

The biographer writes in an excerpt published by People on Wednesday evening that “it seemed like all they did was fight.” He detailed how in the days leading up to Bourdain’s passing, their unorthodox version of monogamy was starting to unravel for the 61-year-old:

“As far as he knew, she hadn’t been with anyone else in their time together except her ex-husband, Civetta—though both agreed they theoretically had every right to have additional lovers (as long he steered clear of Ottavia). He apparently had maintained no side relationships since meeting her except for the prostitutes he continued to frequent, presumably telling himself they didn’t count because there was no emotional involvement and because he and Argento were so frequently separated. Meanwhile he did his best to keep Argento loyal to him by giving her money and moral support as well as by ingesting large amounts of steroids, human growth hormone, and Viagra so that his age was less likely to come between them.

It was this world-class mess of what had once been a love affair that Tony was desperately trying to keep going when — with him just settling in to begin the Kaysersberg shoot with Eric Ripert — Argento showed up on the paparazzi websites cavorting in the streets of Rome (and in the lobby of the Hotel de Russie, where she and Tony had enjoyed romantic interludes) with a handsome young French journalist named Hugo Clément.”

The fight, Leerhsen contends, caused problems during the Parts Unknown shoot in Kaysersberg, France — as Bourdain, per reports, “had to leave set multiple times to talk to her on the phone.” Their fights caused her to pull out of the episode she was scheduled to appear in. The biography paints a picture of a man who had been turned into a wreck by his lover’s infidelity. Leerhsen writes:

“His browsing history showed that in the last three days of his life he googled “Asia Argento” several hundred times.”

The excerpt ends with possibly the most upsetting, intimate thing included in the book: Bourdain’s final text conversation with Asia the day before his death. Anthony wrote, clearly about her being with Clément:

“I am okay. I am not spiteful. I am not jealous that you have been with another man. I do not own you. You are free. As I said. As I promised. As I truly meant. But you were careless. You were reckless with my heart. My life. De Russie . . . It’s only that that hurts’, my A.”

“You were reckless with my heart.” Damn. That’s crushing. He continued:

Asia responded, “I can’t take this” — referring to their relationship. She told him, per Leerhsen, that he had “shown that he is all too similar to the other men she has dated.” He wrote back to her:

“It would have been so easy to have helped me out here. I required so little. But ‘f**k you’ is your answer.”

She blasted his “idiot possessiveness,” referring to him as a “ducking bourgeois,” saying:

He also wrote to her:

“My A. I can’t believe you have so little affection or respect for me that you would be without empathy for this.”

Whether it was lack of communication early on or just changing feelings, we feel so bad for both of the participants in this fight. So often couples can do this to one another, just focus on what they need and find themselves unable to find a compromise. It doesn’t mean either was totally wrong or totally right.

The next day was Bourdain’s last. Leerhsen writes:

“After the next day’s shoot, Tony turned down Ripert’s suggestion of dinner and went out by himself. He ate a lot and drank a lot. Ripert got up in the middle of the night and again put his ear to the wall, but he heard nothing.”

As you may recall, Ripert became worried when his collaborator didn’t show up to breakfast. When he went to investigate, he found Bourdain in his room, dead by hanging. Toxicology reports came back negative for narcotics or any drugs with suicidal ideation as side effects.

BTW, we should say now — adding to the controversy of the book — it’s important for us all to remember how irresponsible it is to hold anyone else accountable for a person’s suicide. There are so many things going on inside people who are claimed by this darkness, blaming the events in their life, even the pain of a breakup, it’s just blatantly unfair. Everyone goes through breakups. It’s not a cause. Asia is not responsible for what happened to Anthony. Period. And the fact people blamed her, sent her messages that “say I murdered him” as she put it? Monstrous.

Does the new book make that worse? It could certainly be interpreted that way.

But Leerhsen includes other texts from just before Bourdain’s death — including to his estranged wife and confidante, Ottavia. In one text to his ex, he complained:

“I am lonely and living in constant uncertainty.”

It seems Bourdain was in a dark mood for many reasons. Like we said, it’s never one thing. At least Leerhsen is providing that fuller picture. Defending his book, he said:

“If I’ve written an unauthorized biography, I’ve also written a sympathetic one and I’ve written one I think is true to the man.”

We told you how Christopher Bourdain felt about the portrayal of his brother in Down and Out in Paradise. He told The New York Times:

“Every single thing he writes about relationships and interactions within our family as kids and as adults he fabricated or got totally wrong.”

“With all due respect, we disagree that the material in the book contains defamatory information, and we stand by our forthcoming publication.”

As for how Asia feels about the book and its new revelations? She told the Times:

“I wrote clearly to that he could not publish anything I said to him.”

She did indeed. In an email to him, she wrote:

“It is always Judas who writes the biography.”

Damn. That’s pretty clear. And if it wasn’t Asia put out one more comment on Thursday…

One more brief part of the revealed text exchange, which apparently is shown on the very first page of Leerhsen’s book? Anthony asked during the fight:

“Is there anything I can do?”

That was the last he sent her.

On her Instagram Stories just hours after the texts had been made public, Asia made an overt reference to the convo, posting those same words: 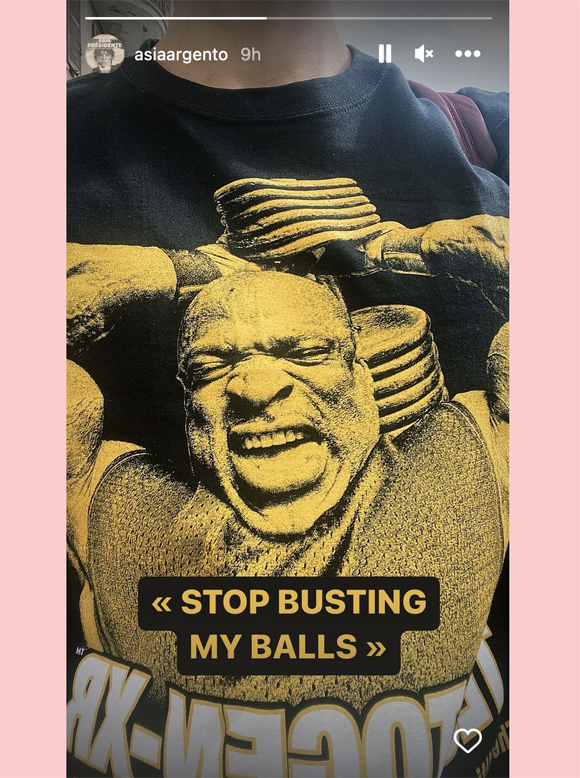 Well, there you have it.

Will you read Down and Out in Paradise? Is Leerhsen being fair in your opinion, Perezcious readers?? Do YOU think revealing personal text messages and computer data gives a biography another level of truth? Let us know what you think in the comments (below).

If you or someone you know is considering suicide, please contact the National Suicide Prevention Lifeline at 1-800-273-TALK (8255) or text 988.