Follow
Home » Celebrities » Zendaya Was Nothing Like Her Disney Channel Character Rocky Blue, Says Her 'Obnoxious' Persona 'Was an Act'

Zendaya Was Nothing Like Her Disney Channel Character Rocky Blue, Says Her 'Obnoxious' Persona 'Was an Act'

Zendaya became famous as a child actor. The Spider-Man: No Way Home star rose to prominence on the Disney Channel, playing Rocky Blue in Shake It Up. But the bubbly, sweet girl seen on screen “was an act,” according to the Emmy-winning performer.

Zendaya played Rocky in ‘Shake It Up”

Shake It Up originally aired on Disney Channel from 2010 through 2013. The role became some people’s first impression of Zendaya, who played Raquel “Rocky” Oprah Blue in the sitcom.

Rocky Blue is the affable, overachieving good girl of the series. In contrast, Bella Thorne portrayed CeCe, her more adventurous, rule-breaking best friend. The two get into trouble, usually because of CeCe. They share a love of dance in common, spending time as performers on their local teen dance show.

After four successful seasons, Shake It Up ended. By this point, Disney fans clearly adored Zendaya, leading to her booking another series, K.C. Undercover, on the network. 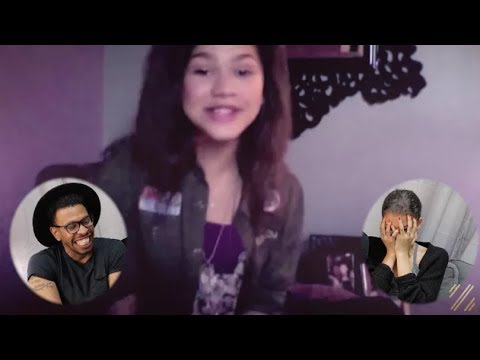 Now an accomplished actor in film and TV, Zendaya looked back on her younger self. The commentary is quite fun to watch, as the now-grown celebrity laughs at everything from her hand motions to what she calls “a persona.”

“When I was younger, I genuinely felt that I had to make a persona that matched Rocky,” Zendaya explained in the YouTube video filmed in 2017. She called her child self “so obnoxious,” especially when she said, “this is a place for happy, smiling faces.” “This is the most annoying shit I’ve ever seen in my entire life,” she laughed.

Zendaya added that she actually wrote a script for her videos, assuming what kids wanted to see. “I swear I’ve always been like I am now,” she said of her no-holds-barred personality. “This was an act.”

At one point, Zendaya says she needs to delete one of her videos because it is “so fake.” “What a fake ass, little s—,” she said of herself. “No wonder people were irritated with me.”

Zendaya became a part of the Disney Channel lineup in 2010 when she was just 14. Though Shake It Up got her noticed, she also appeared in Disney Channel Original Movies like Zapped (2012) and Frenemies (2014).

In 2015, she began starring in and producing K.C. Undercover. She then took on projects outside of Disney, like The Greatest Showman.

However, Zendaya rekindled her Disney affiliation when she landed the role of MJ in the Spider-Man franchise. These films led to her rise to global stardom, putting both her and her significant other and co-star, Tom Holland, on the map in a serious way.

At just 25 years old, Zendaya boasts a host of accolades and awards. In 2020, she became the youngest Best Actress in a Drama Series winner for her performance in Euphoria, a show that proves she has undoubtedly grown up during the years after Shake It Up.