Best-dressed brides of 2022! The most popular wedding gowns of the year include Carrie Johnson’s rented frock and Nicola Peltz’s controversial Armani number

Most brides opt for a classic long white or ivory wedding dress during their romantic nuptials, however some celebrities tend to push the fashion boundaries and go for a more daring look.

And now a new study has revealed the most popular celebrity wedding dresses of 2022 – with Brooklyn Beckham’s bride Nicola Peltz scooping the top spot.

The research conducted by fabric experts Dalston Mill Fabrics analysed Google search data from the beginning of 2022 to establish which celebrity wedding dress caused the biggest rise in searches for wedding dresses.

The study revealed that Nicola Peltz’s wedding dress caused the biggest rise in searches for wedding dresses in the United Kingdom, with a 194 per cent rise above average on her big day to Brooklyn Beckham.

The second most popular celebrity wedding dress of 2022 wasn’t worn as part of a wedding, but rather on the red carpet for this year’s Met Gala.

Kylie Jenner wore a wedding dress designed by Off-White in honour of the late Virgil Abloh. 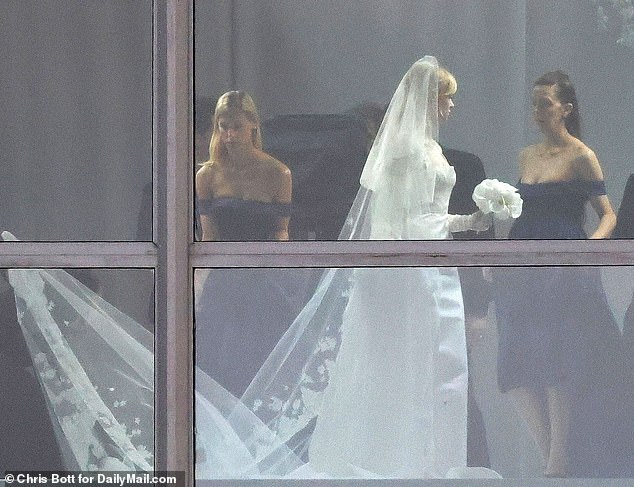 The actress, 27, married the son of David and Victoria Beckham, 23, in a lavish £3million ceremony at her family’s £103million estate in Palm Beach, Florida, in April.

The proceedings started at 6pm sharp when Brooklyn was joined by Nicola for the nuptials in one of the massive tented structures set up at the estate.

Brooklyn could be seen waiting on his own on a stage garlanded with flowers and plants for 15 minutes before Nicola arrived for the extravaganza in a Valentino Haute Couture white dress.

The aspiring chef chose brothers Romeo, 19, and Cruz, 17, as his best men for his much-publicised marriage to the daughter of billionaire financier Nelson Peltz, 79. His sister Harper, ten, was a bridesmaid.

Since tying the knot, the newlyweds have been enjoying married life and Brooklyn has had yet another huge tattoo dedicated to his wife.

The inking, written in black cursive script, reads: ‘Nicola when you walked down the aisle you took my breath away you look so beautiful tonight and always.

‘Let me start by saying that words cannot even describe my love for you just looking at you I see my future and it feels like a dream. You are my world and I continue to fall more in love with you every single day. 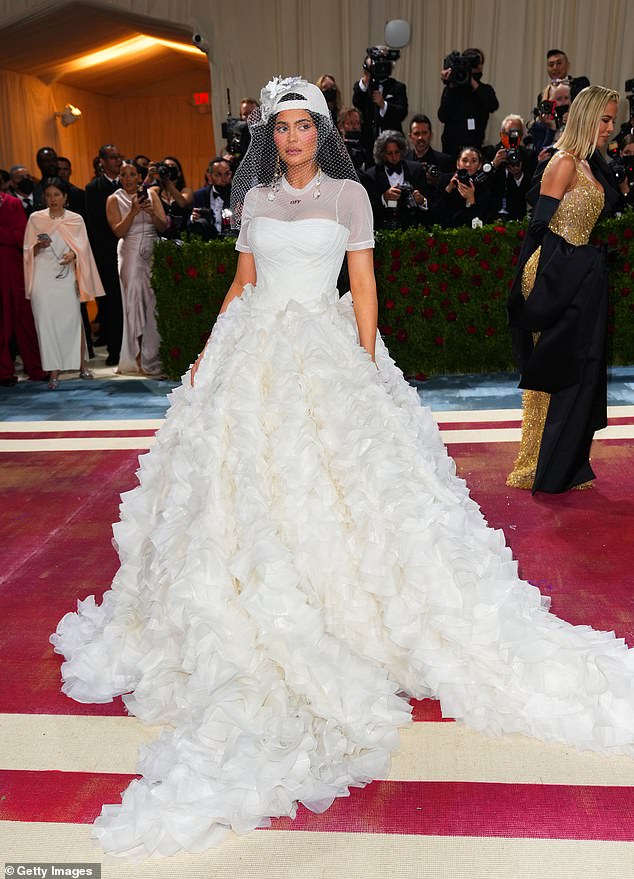 Kylie Jenner wore a wedding dress designed by Off-White in honour of the late Virgil Abloh for the Met-Gala, and she wasn’t actually getting married.

The 24-year-old makeup mogul – who has been highly praised for her Met Gala fashion in the past – emerged in a bizarre white ruffled wedding dress.

Kylie’s lengthy raven hair flowed out from under a white veiled baseball cap, which she chose to wear backwards for a sportier look.

The cap, which slightly obscured Kylie’s famous face, was adorned with floral appliques.

However the non-wedding wedding dress was a hit with brides to be because they’ve been searching for the dress at a high rate, causing a surge in Google searches.

Jenner’s ensemble caused searches for ‘wedding dress’ to spike 182 per cent above the average search volume. 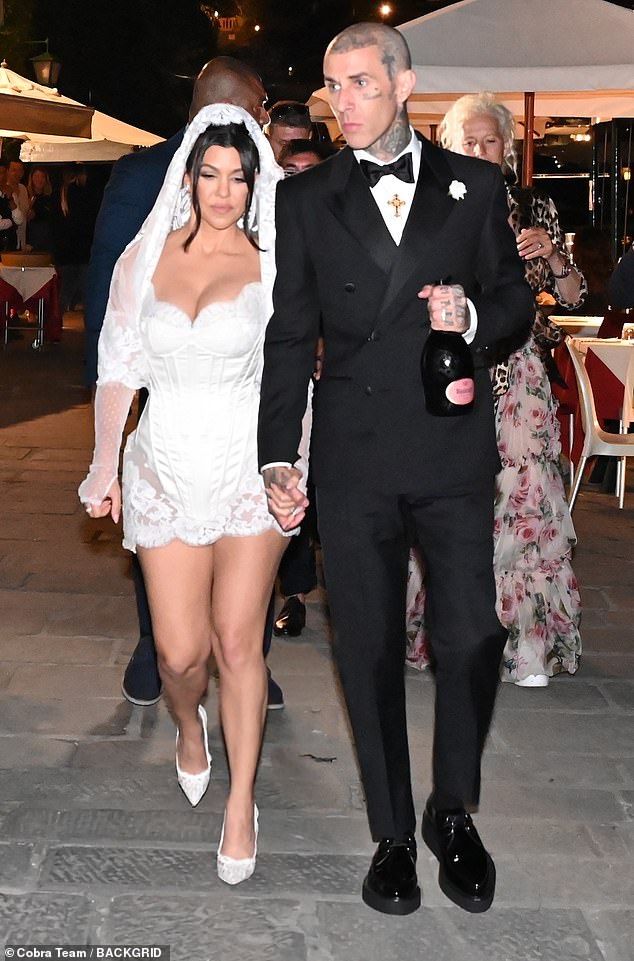 Following at a close third was Kylie’s sister Kourtney, who wore a Dolce & Gabbana satin corset mini dress in her wedding to Blink 182 drummer Travis Barker.

She paired the racy look with high heels, long mesh gloves and a veil.

It caused searches for ‘wedding dress’ to rise 167 per cent above average.

The happy pair held an unofficial wedding in Las Vegas this past April, and they were legally married in Santa Barbara in May, just before they held their second ceremony in Italy.

The lavish showbiz wedding of Kourtney and Travis was sponsored by luxury fashion house Dolce & Gabbana in an exclusive deal.

Members of the Kardashian and Jenner clans were repeatedly photographed in expensive Dolce & Gabbana outfits in the run up to the ceremony was held in the Italian seaside village of Portofino.

The worldwide coverage of the reality stars showcasing the brand’s clothes against the idyllic backdrop of the Italian Riviera gave millions of pounds worth of free publicity to Dolce & Gabbana which has been hit by controversies in recent years.

Causing a 158 per cent rise in searches for ‘wedding dress’ was Britney Spears’ wedding dress.

The fourth most popular wedding dress was designed by Donatella Versace and featured a portrait neckline and pearl buttons.

Britney tied the knot with her longtime partner Sam in the summer, becoming a newlywed for the third time during an intimate fairytale wedding that was attended by a select group of friends and family – including A-listers like Madonna, Drew Barrymore, Selena Gomez, and Paris Hilton.

Baby One More Time singer Britney was the picture of bridal bliss as she posed with her new husband, looking radiant in a custom-made white Versace wedding gown, which featured an off-the-shoulder sweetheart neckline, long train, and an elegant veil that swept along the floor behind her as she exchanged vows with her 28-year-old husband. 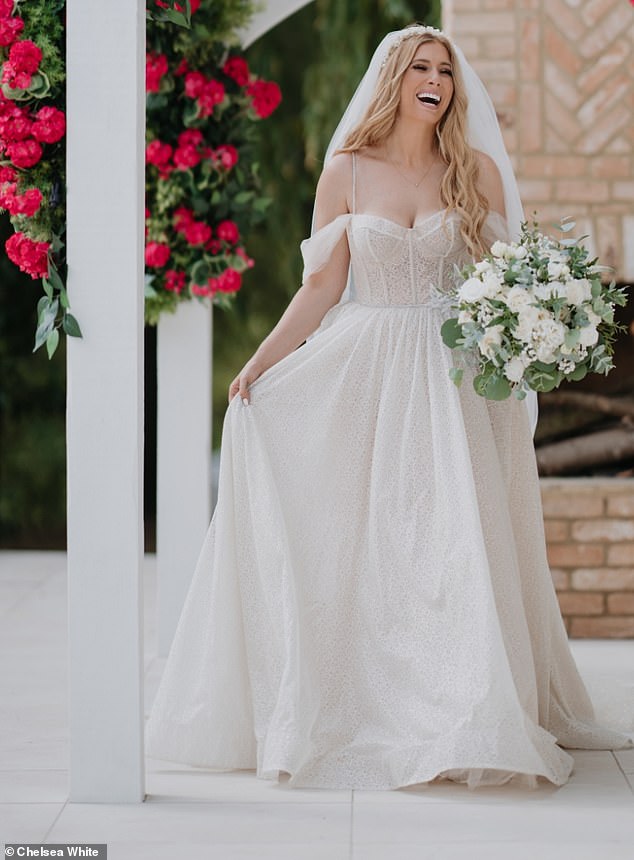 Another top contender was Loose Women star Stacey Solomon, who came fifth in the list.

The ceremony was held in the couple’s hometown of Essex with the bride wearing a white gown with a corset top, a long flowing skirt, and spaghetti straps.

Searches for ‘wedding dress’ skyrocketed 152 per cent above average amid Stacey and Joe’s wedding.

The 32-year-old mother of four looked like a real-life Disney princess as she wed long term partner Jow Swash at their home – Pickle Cottage.

Bucking tradition, she wore a long pale pink gown, with off-the-shoulder sleeves and a corseted bodice, with a long veil and flower crown. 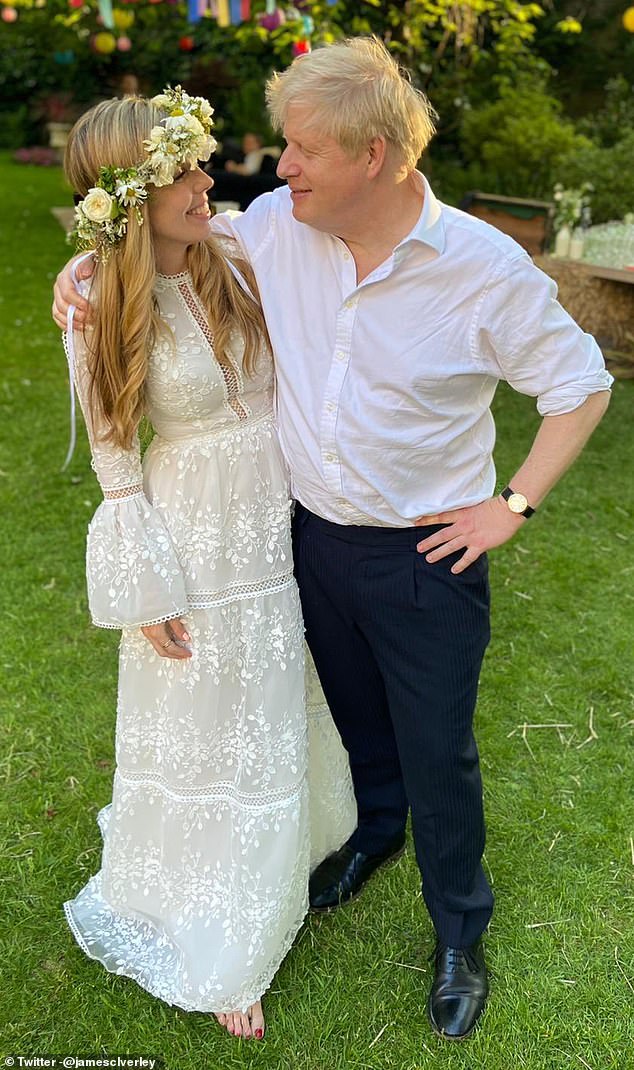 Barefoot boho bride – Carrie Johnson joined the list after her £25 rented Savannah Miller dress worth £3,500 was a hit with brides-to-be

An unlikely contender is the ex-Prime Minister’s wife Carrie Johnson.

The conservationist, 34, wore a rented gown designed by actress Sienna Miller’s sister Savanah Miller, which would usually cost £3,500 but only £25 to rent for the day from site Wardrobe HQ.

She said her vows in a lockdown wedding to former leader Boris, 54, in a venue owned by billionaire JCB chairman Lord Bamford, one of the Tory Party’s most prolific donors. 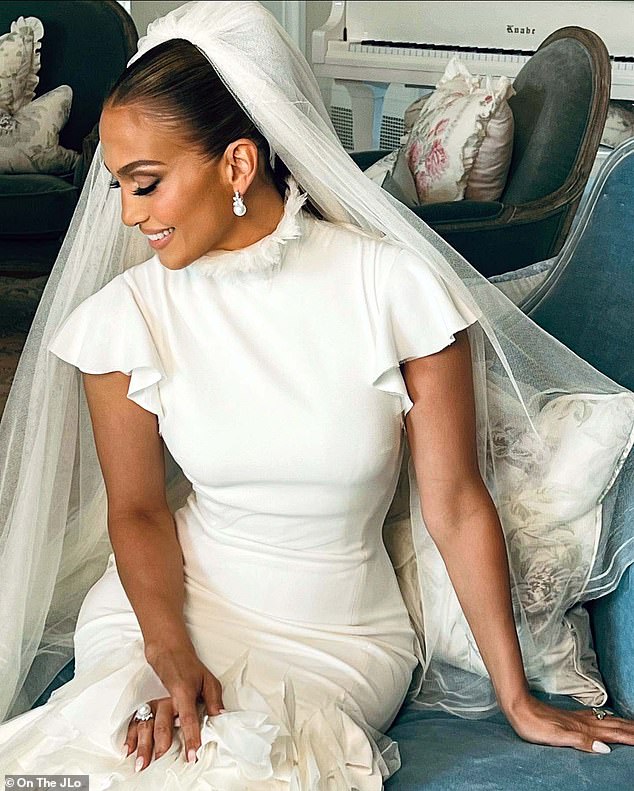 Jennifer Lopez, who was the seventh most popular on the list, certainly didn’t look like Jenny from The Block in her wedding to Ben Affleck at The Little White Chapel in Las Vegas.

One was an off-shoulder number by Zuhair Murad from the Spring 2023 Bridal collection, and the other a classic white dress with a veil.

The pair’s happy reunion came 20 years after they first dated and got engaged, only to call-off their wedding in Autumn 2003, blaming excessive media attention for the shock split of Ben and Jen- in a twist of fate the pair got back together again after Affleck’s divorce from Jennifer Garner. 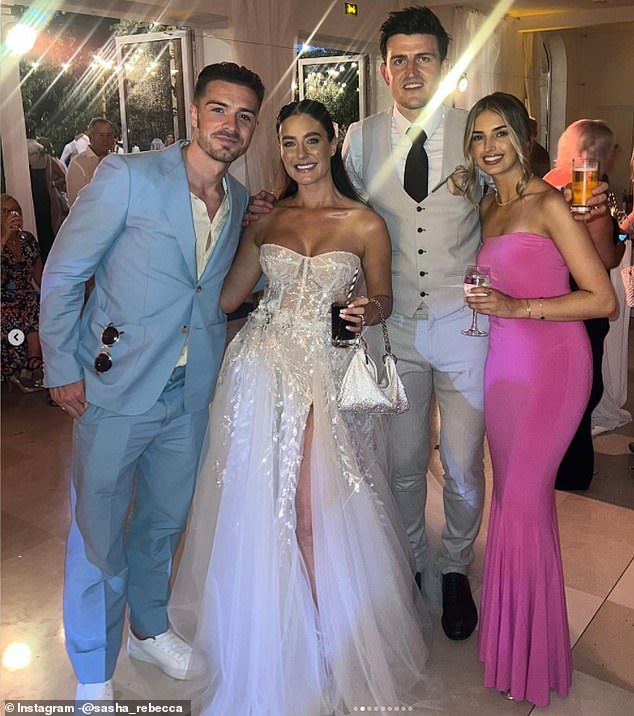 The pair celebrated their nuptials by hosting a lavish £500,000 wedding bash at an 13th century château

The pair celebrated their nuptials by hosting a lavish £500,000 wedding bash at an 13th century château in June.

Harry and Fern, 27, who looked stunning in a flowing princess-style gown and veil, shared a sweet kiss at the altar after being declared man and wife, with guests including fellow England star Jordan Pickford and his wife Megan in attendance.

Onlookers told MailOnline that while the couple were able to exchange their vows in the sunshine, the weather soon took a turn, and as the rain began to fall the entire party headed inside.

Soon after Harry shared the snap from his nuptials, many other sporting stars shared their congratulations in the comments, with his England teammate Conor Coady writing: ‘Congratulations to you both big man.’

The dress saw a 135 per cent rise in google searches for the ensemble. 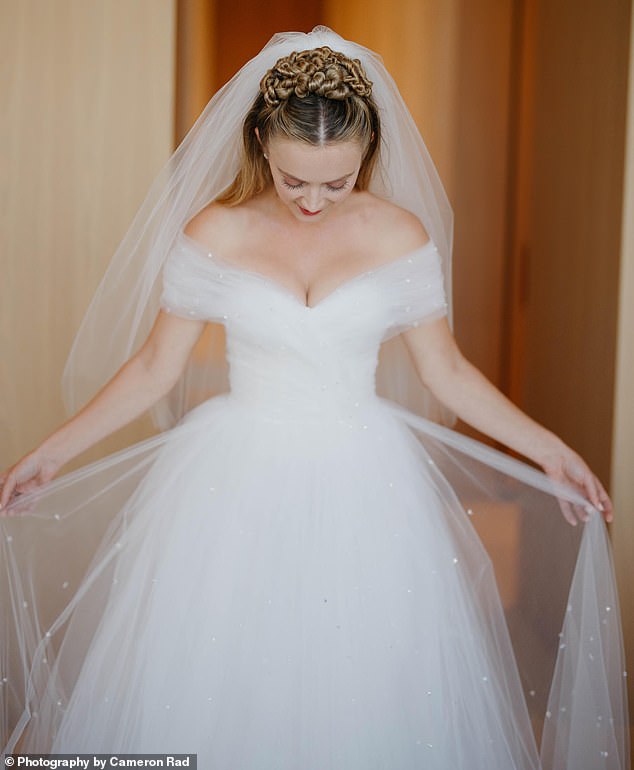 The pair married back in March, with Google searches rocketing by 129 per cent on the day images were released of the big day. 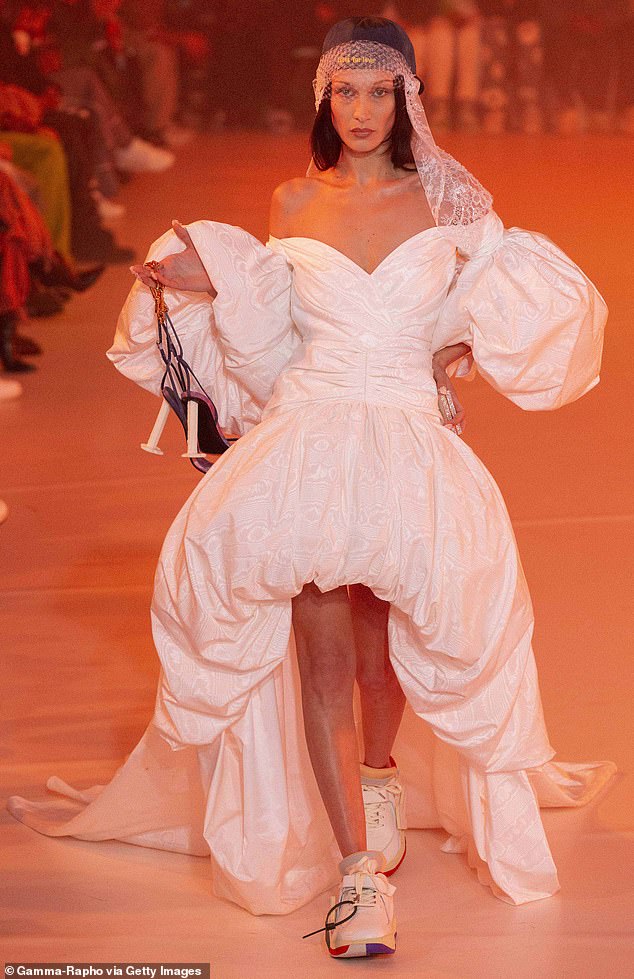 Supermodel Bella Hadid wasn’t getting married when she wore this extravagant puffball wedding gown by brand Off-White but that didn’t stop fans desperately trying to get their hands on the gown.

Google searches rose by 104 per cent on the day that Bella strutted the runway in the unusual outfit paired with trainers instead of heels – a look songstress Lily Allen was famous for in the 00’s.

The brand is the same as the one worn by Kylie Jenner at the Met-Gala and is known for it’s blend of eclectic and classical wedding dresses.