King Charles will have a ‘major problem’ with Prince Harry and Meghan Markle shunning Christmas at Sandringham because he wants to present a ‘united’ family unit, royal expert claims

Prince Charles will have a ‘major problem’ with Prince Harry and Meghan Markle shunning Christmas at Sandringham because he wants to present a ‘united’ family unit, a royal expert has claimed.

The Royal Family will gather at the Sandringham estate in Norfolk later this month for the first time since the Queen passed away at the age of 96 in September.

Earlier today, the Firm braced themselves for fresh controversy as the teaser trailer for Meghan Markle and Prince Harry’s bombshell docu-series was released – with the Duchess promising viewers they will ‘hear our story from us’ next week.

Writing in The Sun, royal expert Robert Jobson says King Charles, 74, had wanted to present a ‘unified family’ this Christmas. 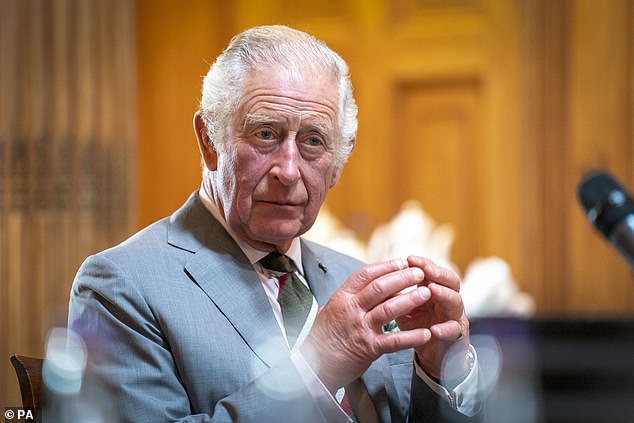 King Charles will have a ‘major problem’ with Prince Harry and Meghan Markle’s absence this Christmas, royal expert Robert Jobson claimed. The monarch pictured at Dumfries House in November 2022

The author- who has written the book King Charles: The Man, the Monarch and the Future of Britain – said Charles is trying to show that the festive season should be ‘all about family and forgiveness’.

The expert wrote: ‘His major problem this Christmas is not going to be anyone sitting around the table on December 25 but the two people who will be missing — Harry and Meghan.

‘Charles has tried to forgive them — he would love to be able to end the friction — but contact with them has been limited.’

When the Duke and Duchess of Sussex were in the UK shortly before the Queen’s death, the expert claims the couple had a meeting with Prince Harry’s father – which they were allegedly late to. 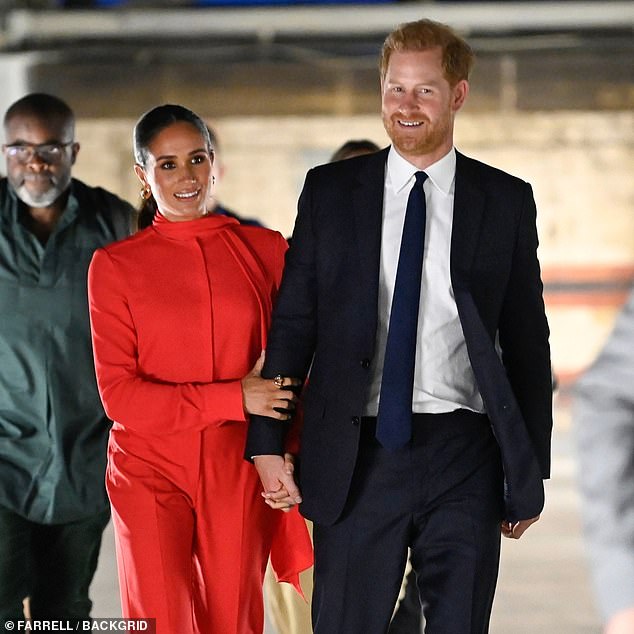 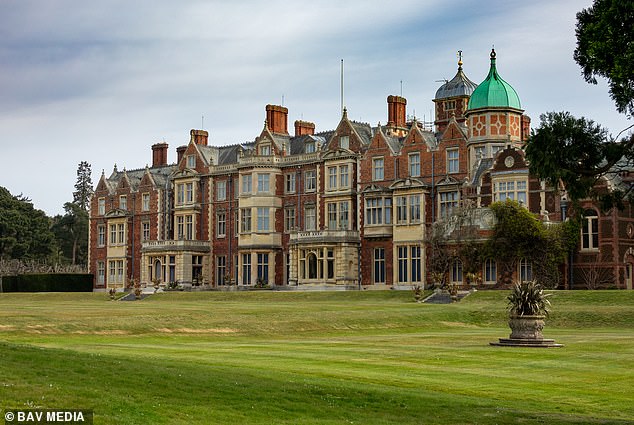 The biographer claims the monarch was only with the couple for a ‘short while’ before he had to leave.

What’s more, the King has even reportedly invited Prince Andrew’s ex-wife Sarah Ferguson to the celebrations.

Following her infamous toe-sucking scandal in 1992, Princess Beatrice and Princess Eugene’s mother was banned from the attending the royal occasion by Prince Philip.

The Duchess of York, 63, who married Her late Majesty’s eldest son Prince Andrew in 1986 before separating in 1992, spoke to Hungarian newspaper Blikk about her festive plans last year.

She revealed that she travelled to Windsor at the Queen’s invitation to celebrate Christmas. It would be the late monarch’s last festive season before her death in September, aged 96. 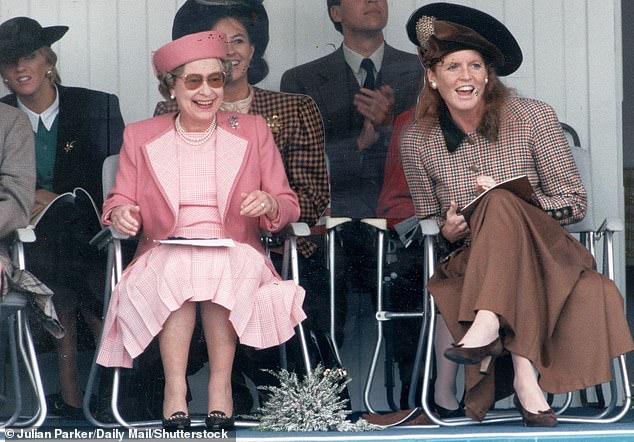 Sarah Ferguson has revealed she spent Queen Elizabeth II’s last Christmas with her. Pictured, together in 1990

‘Personally, I don’t know yet how I will spend Christmas. I was able to spend last year with the Queen, now I don’t know where I’ll be, but for thirty years I’ve been teaching my daughters that it’s actually Christmas every day.’

Last month, royal expert Jennie Bond said that King Charles was trying to break away from tradition and claimed the Royal Family won’t be watching his first Christmas speech.

Speaking to OK!, the expert explained how Christmas has always been a formal celebration in the Royal household – with the family either bowing or curtsying to Her Majesty.

Instead, the royal author says King Charles’ first Christmas as monarch will be ‘less buttoned up’ than previous years.

However, the expert says King Charles will break the family’s tradition of always gathering to watch the monarch’s television address when it airs in the afternoon.

Instead, the expert says Charles will ditch this ‘archaic’ ritual and instead want his loved ones to focus on reminiscing about their happy times with the Queen. 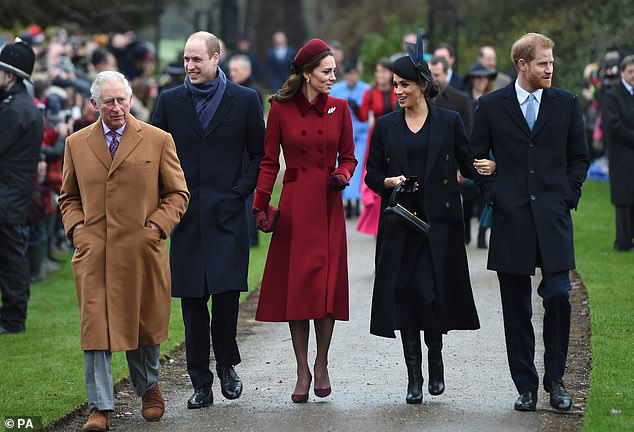 King Charles is said to have invited Prince Harry and Meghan Markle but they are ‘unlikely to attend’, according to a royal source. The King pictured with the Prince and Princess of Wales and the Duke and Duchess of Sussex arriving at St Mary Magdalene Church on Christmas Day 2018 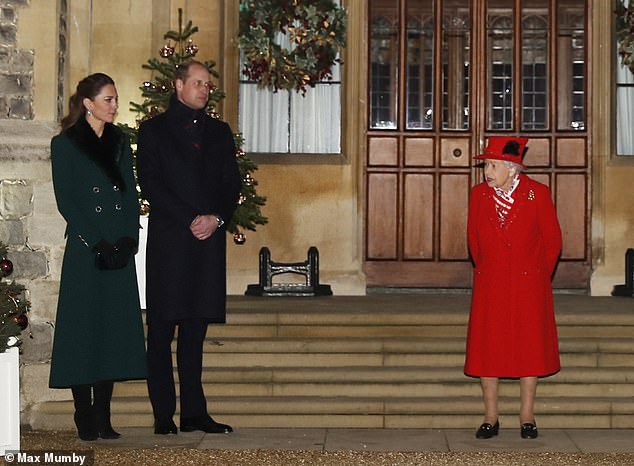 The Royals have made Sandringham their base for Christmas and New Year since 1988, however in 2020 and 2021, the Queen spend Christmas at Windsor. The Queen is pictured with William and Kate at Windsor in December 2020

What’s more, author says the King will likely in his mother’s footsteps and pre-record his speech ahead of time.

She added: ‘I’m sure he’ll record [the speech] a few days before and it’s bound to have some reflection on their loss.’

The royals are still expected to attend a service at St Mary Magdalene Church on the Sandringham Estate before returning home for their Christmas meal.

It will be the first time that Charles hosts the annual family gathering and Christmas break at the private estate in Norfolk.

The Prince and Princess of Wales will be there, staying at nearby Anmer Hall, the home they were given by the Queen.

Other family members are expected to join the King and Queen Consort on their walk to church on Christmas morning.

The Royal Family has made Sandringham their base for Christmas and New Year since 1988.

Although the family traditionally spends the holiday at the country estate, the last few years had seen a change in routine due to the COVID-19 pandemic.