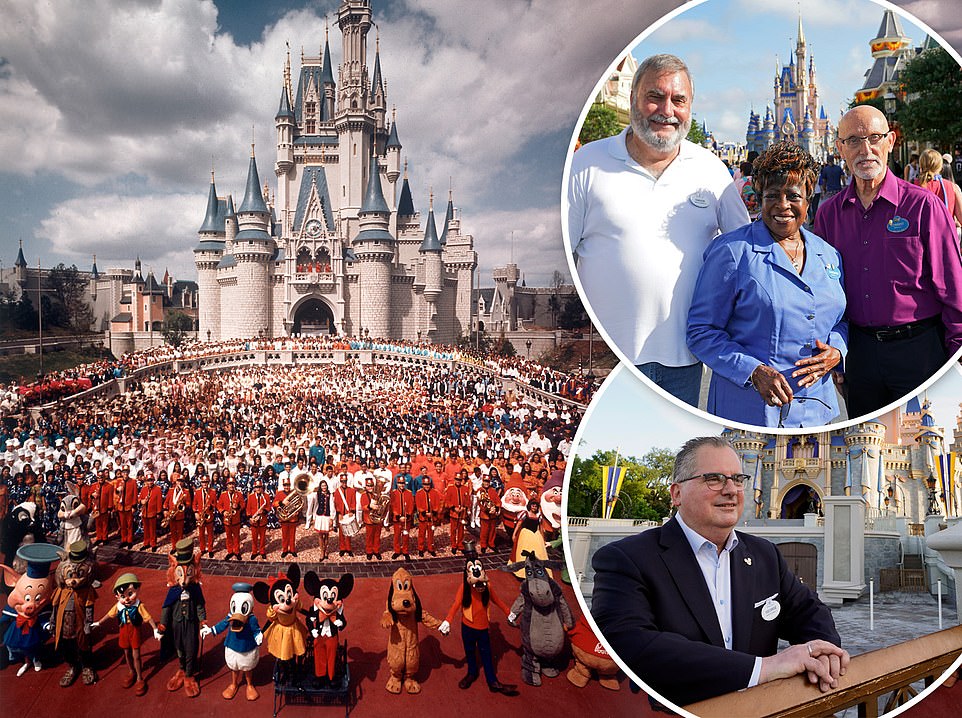 Walt Disney World opened in Florida on October 1, 1971, just six years after Walt Disney announced plans for a new park following the success of Disneyland in California. Now, one way it’s celebrating its 50th anniversary is by appreciating the employees who helped open it in 1971, the ones who have spent 50 years turning it into what it is today. Click through to see how these employees are celebrating and why they continue to work at the iconic resort, 50 years on… 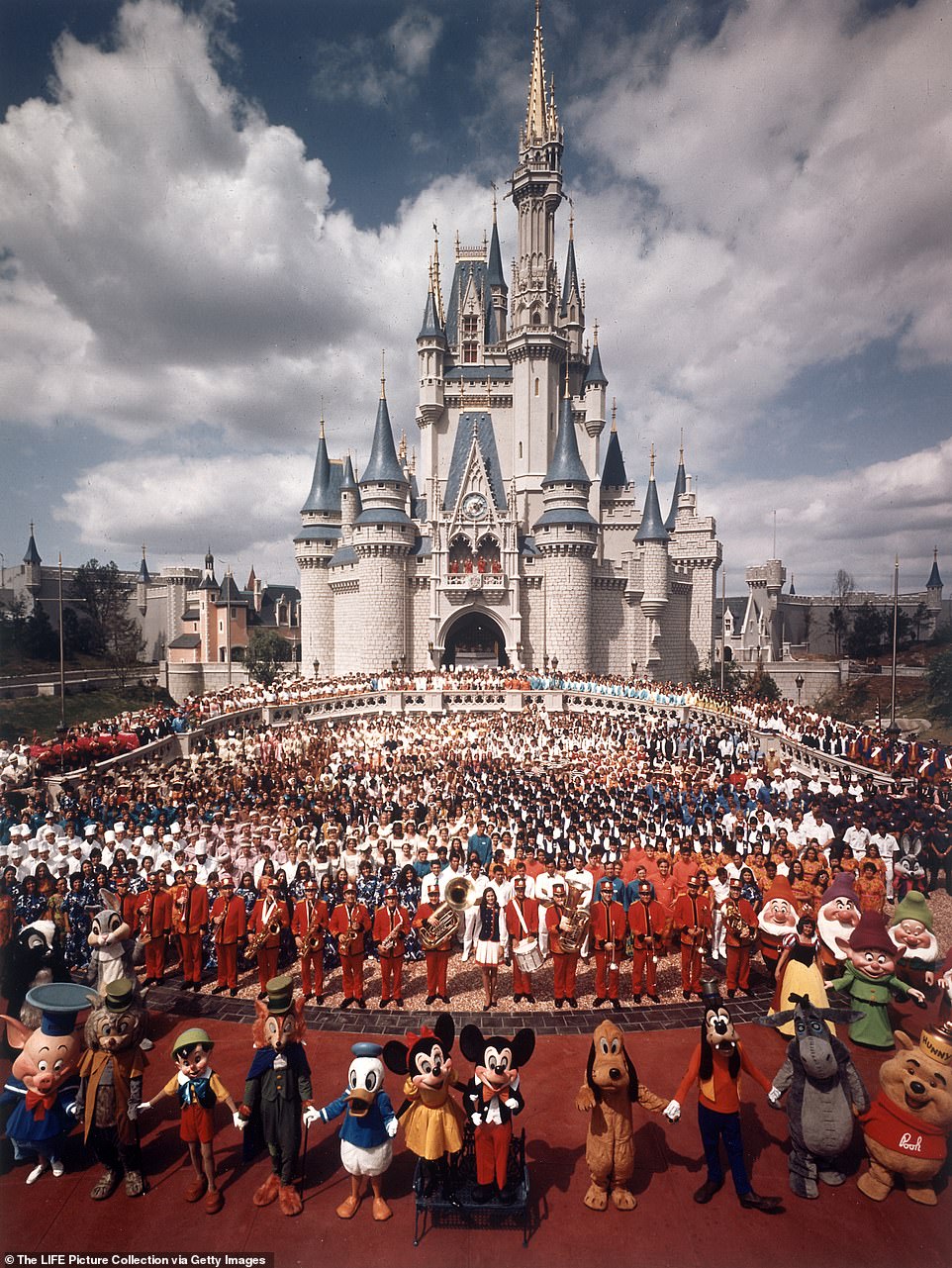 This photo shows the thousands of Disney World workers standing hand-in-hand in front of the iconic Cinderella Castle with Mickey Mouse and other costumed characters. Two weeks later, the image was featured on the cover of Life magazine. Taking this image was one of the most memorable moments for many of the employees who helped open the park and who still work there today. 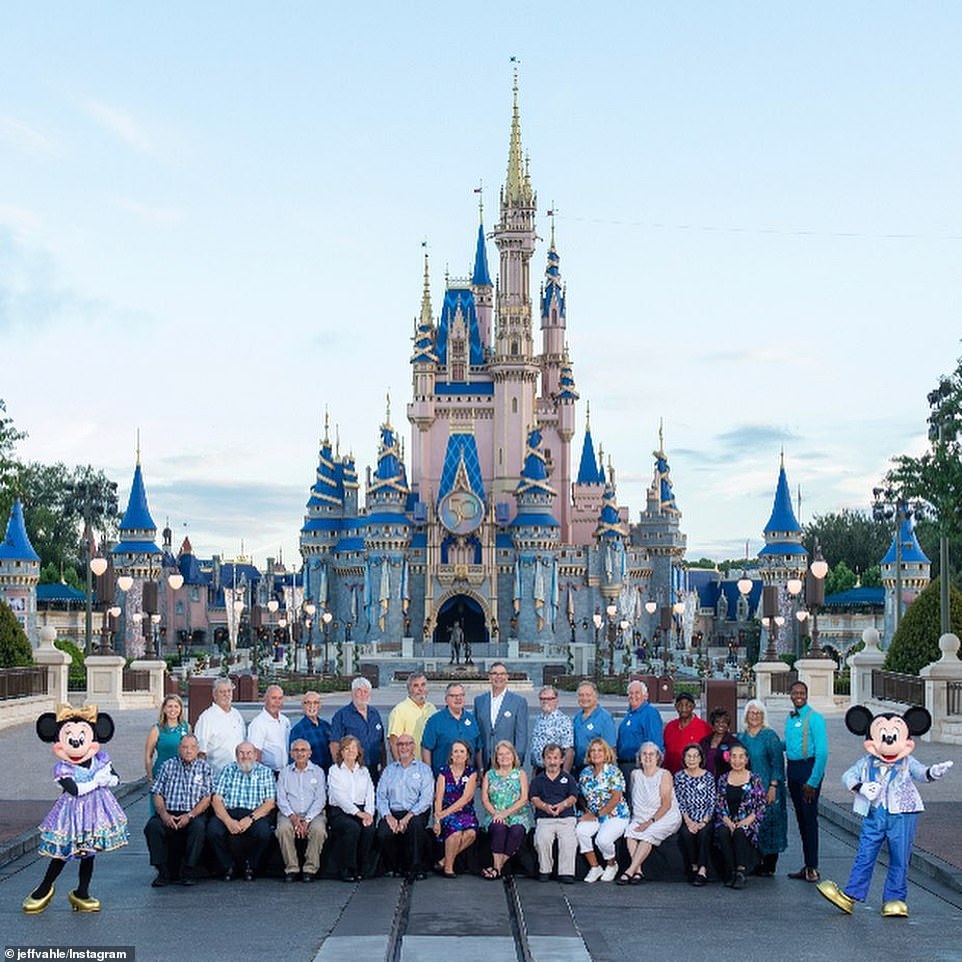 Jeff Vahle, the president of Walt Disney World Resort, posted this photo on September 20, 2021, showing the Disney World employees who have been there since the resort’s opening day 50 years ago. 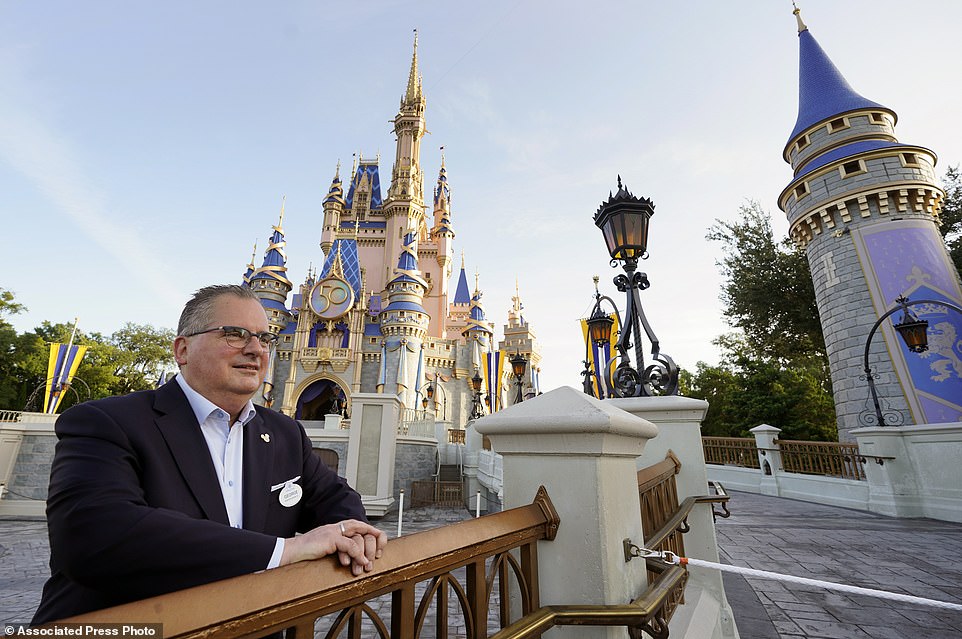 George Kalogridis (pictured) is one of those employees. He applied by chance for a job as a hotel worker, before spending the next five decades rising up the ranks to become president of Walt Disney World and Disneyland in California. Kalogridis said he was a high school graduate and made a split-second decision to pick a room during a recruitment day where prospective hotel workers were being hired. He became one of the first workers at Walt Disney World. And even though he was a busser, Kalogridis was drafted in to help lay down sod outside the hotel he was working in, just hours before Disney World’s grand opening. Kalogridis is now one of around two dozen workers from that first day five decades ago who still work there today. 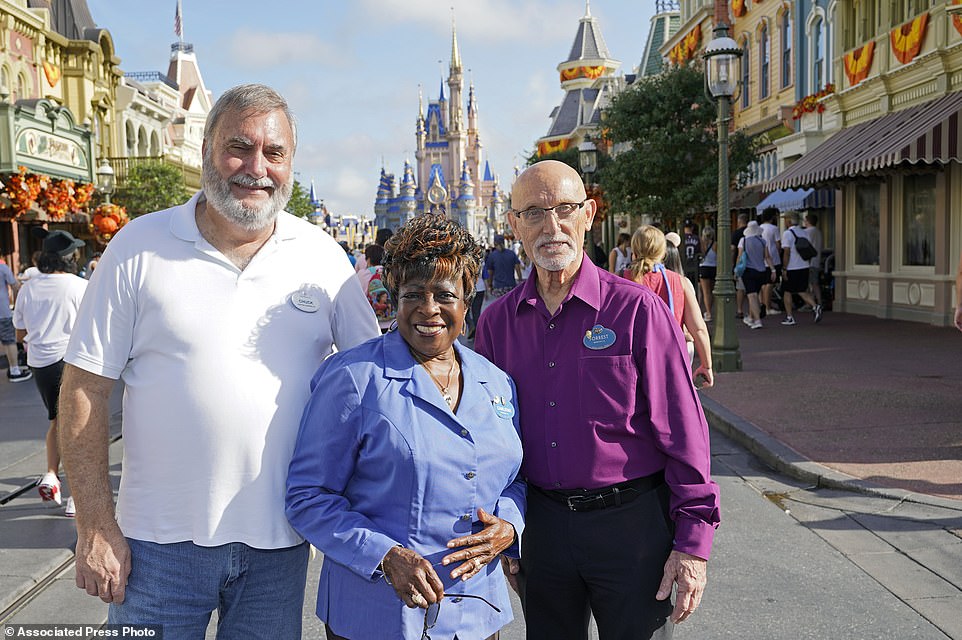 Walt Disney World employees Chuck Milam, Earliene Anderson and Forrest Bahruth (pictured) are also celebrating 50 years at the park. Earlier this month, the ’50-year Cast’ were honored with a party and awarded with special name tags. 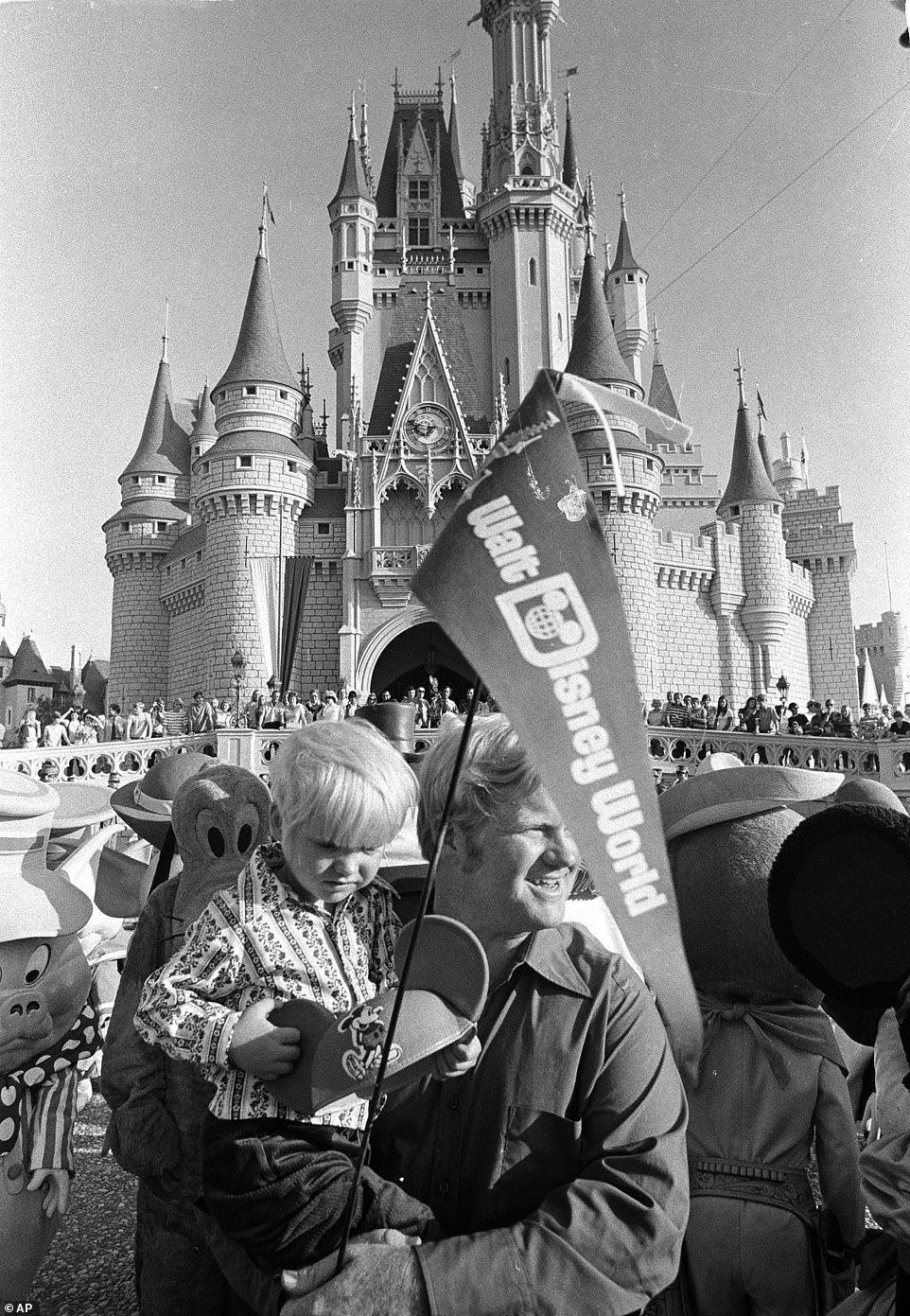 Around 6,000 employees welcomed excited members of the public for the very first time through the gates of the Magic Kingdom – the first park to open at the resort. Pictured: Visitor William Windsor Jr. carries his son Lee past Cinderella’s castle after their family slept in their car to be the first into the park on opening day on October 1, 1971. 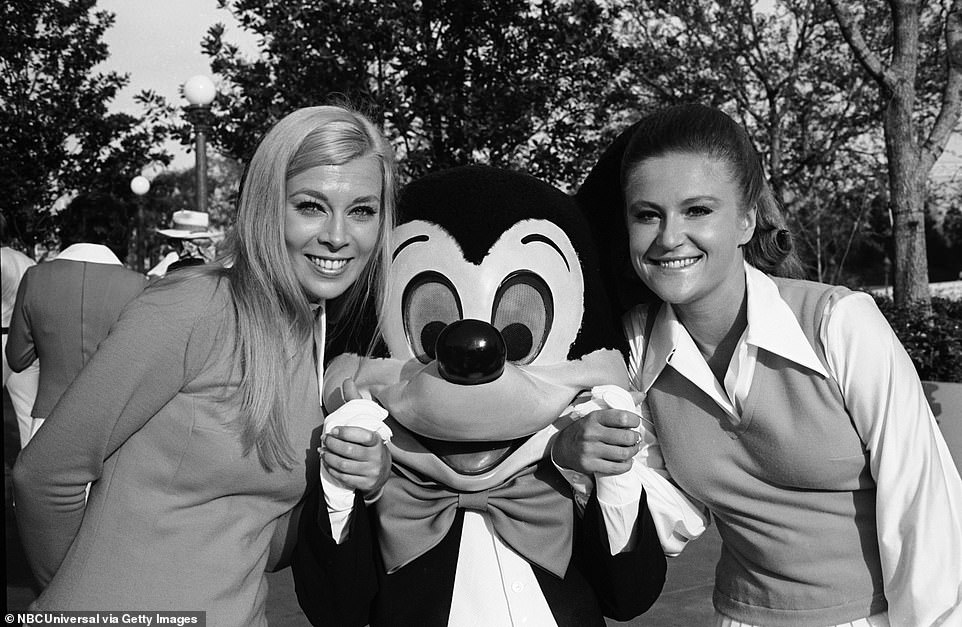 Since it opened, the resort has seen the opening of three more theme parks, two water parks, two dozen hotels and an entertainment district, with the workforce reaching 77,000 employees. Pictured: Mickey Mouse between two Disney World cast members on October 13, 1971, days after the park opened. 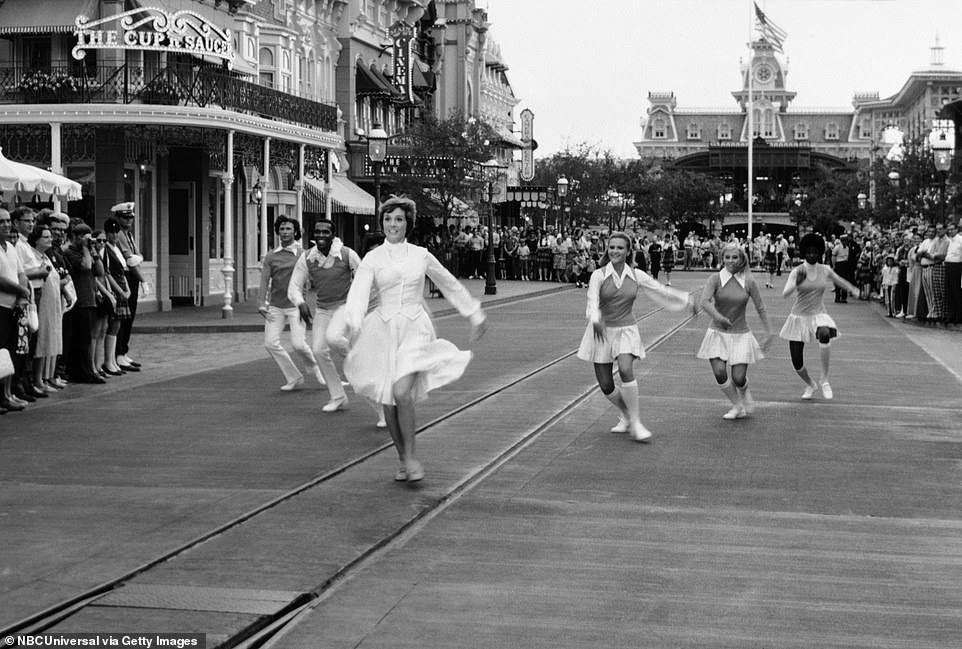 Julie Andrews (center) performs on Main Street USA in the Magic Kingdom for the opening ceremony on October 25, 1971. Andrews’s turn as Mary Poppins in 1964 turned her into one of the most iconic Disney stars ever. 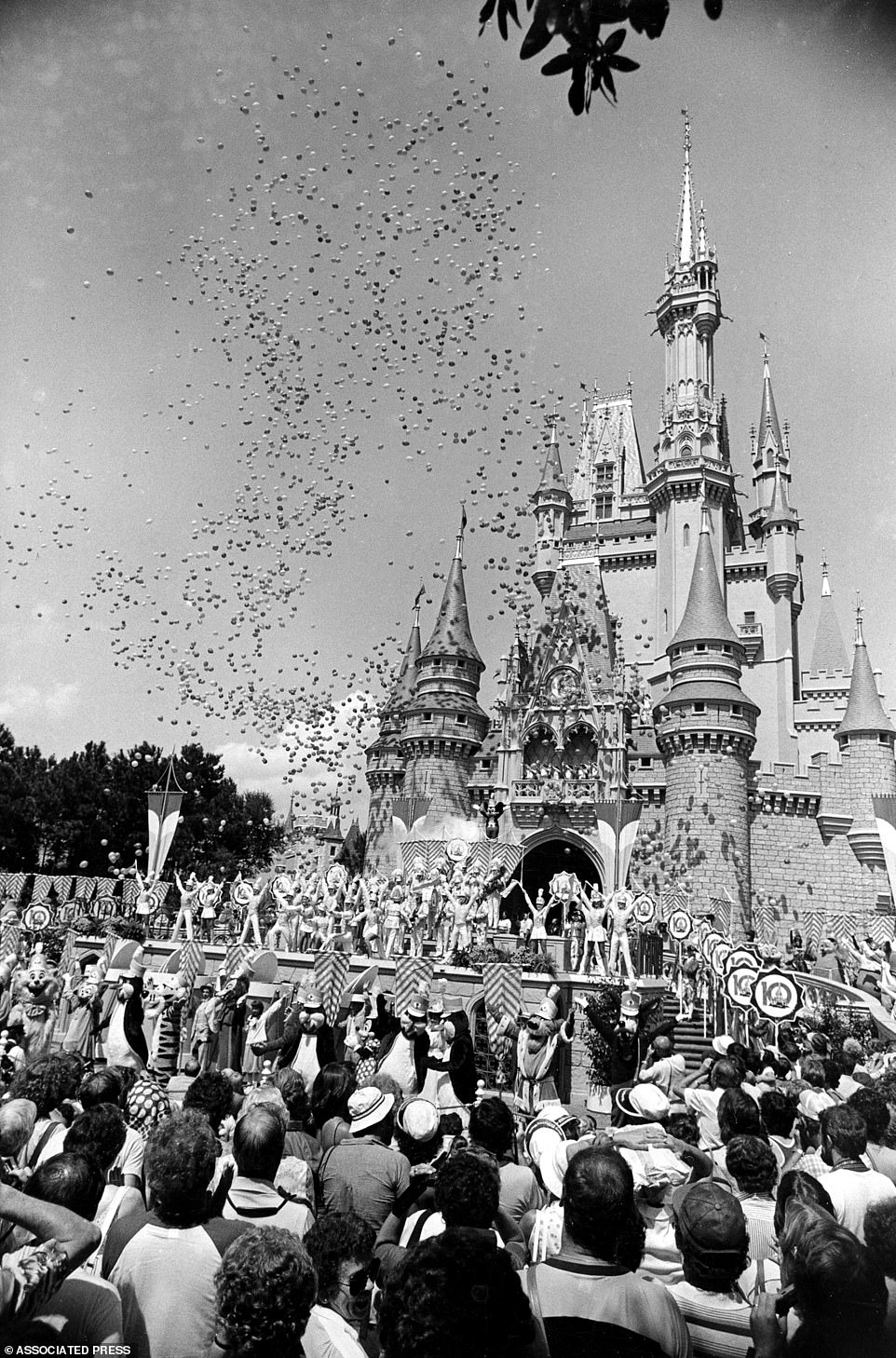 Hundreds of balloons were released into the sky after the grand opening ceremony and parade at Disney World in Florida on October 25, 1971. 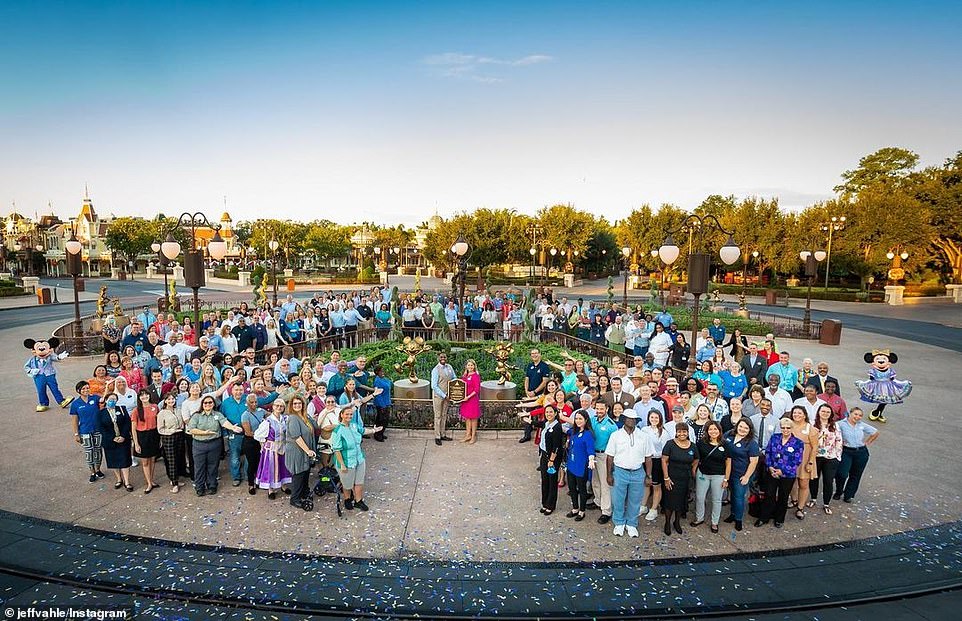 Some of the current Disney World employees, dozens of whom worked at the park when it opened in 1971, are pictured here in 2021, ahead of the 50-year anniversary. 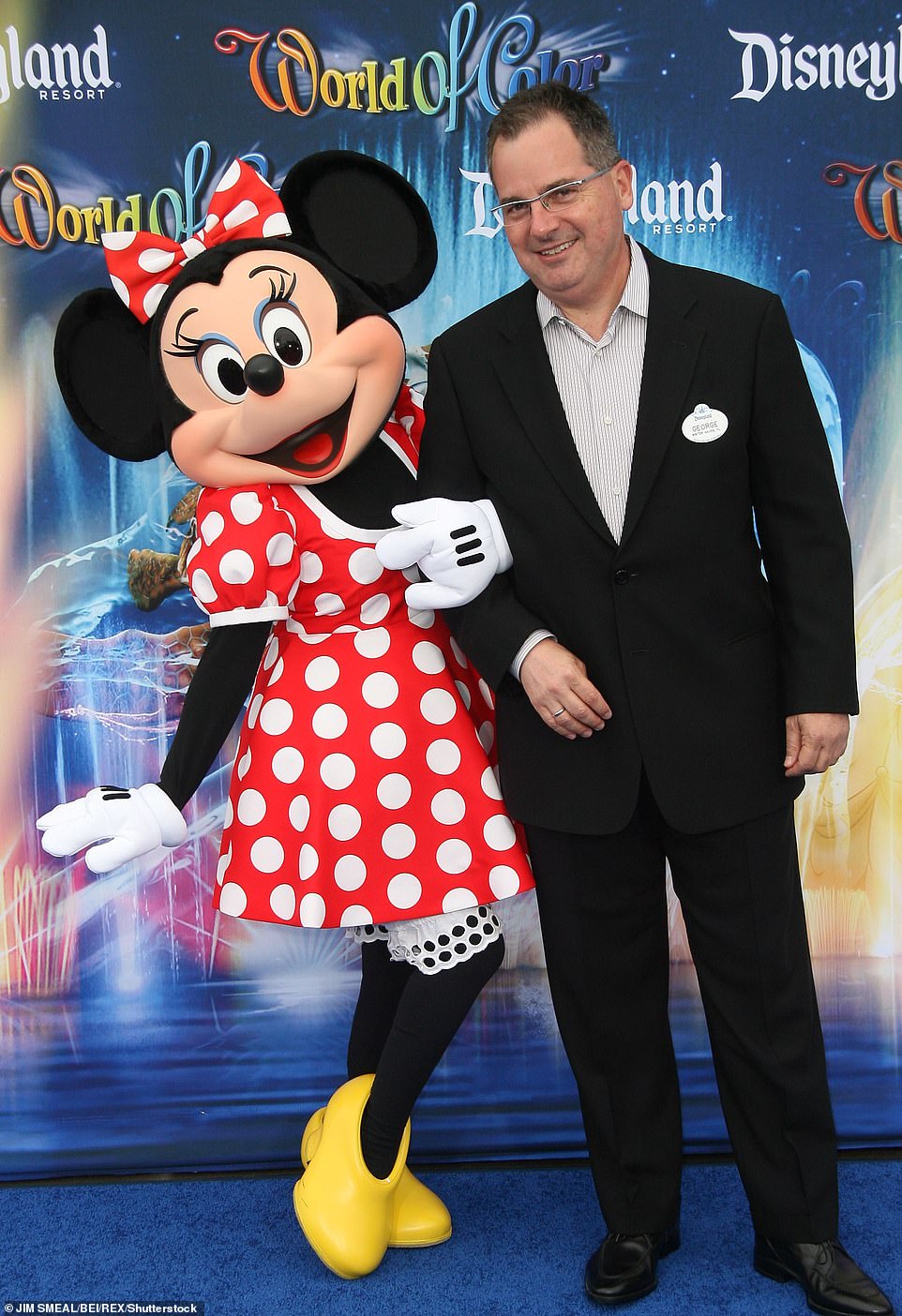 Kalogridis is now one of around two dozen workers from that first day five decades ago who still work there today. Pictured: Kalogridis in 2010. 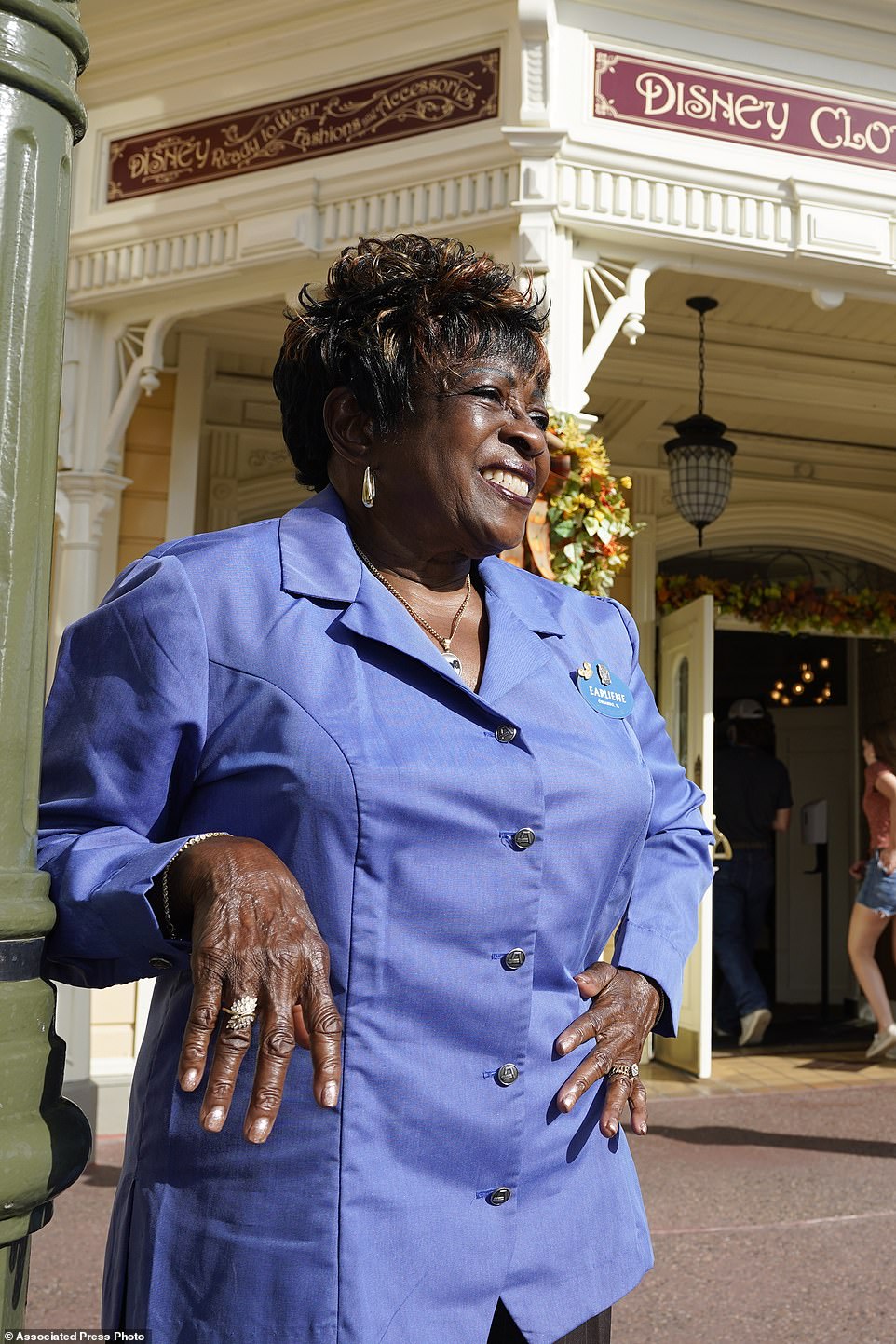 Earliene Anderson (pictured) recalled how she jumped at the chance to take a job at the new Disney theme park in Florida back in 1971, having fallen in love with the beauty of Disneyland in California during a trip two years earlier. She now works in merchandising at a Magic Kingdom hotel. ‘Disney has been my love, and it still is,’ Anderson said. ‘I love Disney.’ 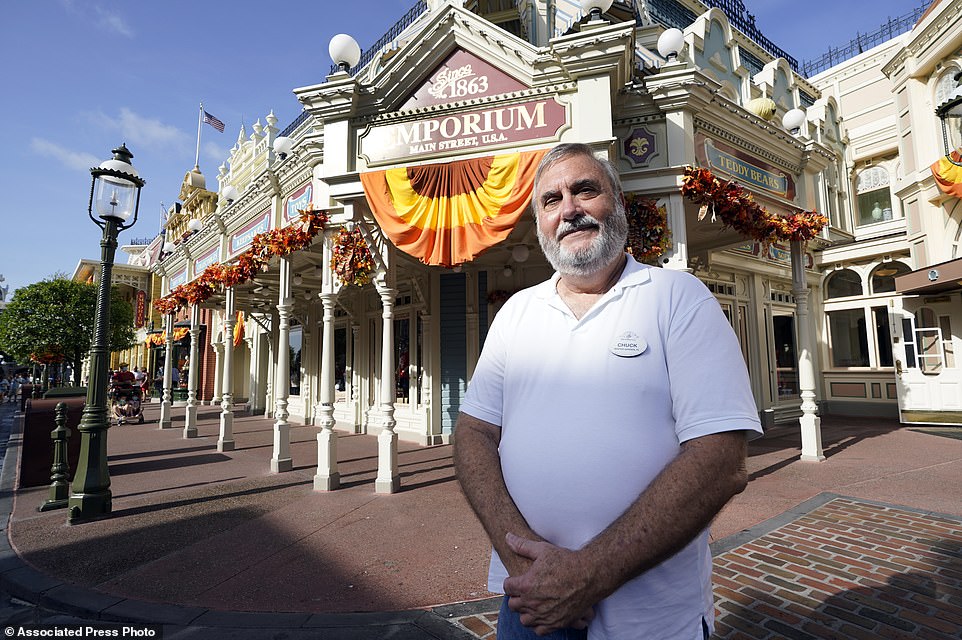 Another original worker, Chuck Milam (pictured), recounted how he had gotten a tip about a job opening from a transplanted Disney executive whose new house he was landscaping. He went for the job and the rest was history. He started out as a warehouse worker before moving up the ladder to become a buyer of spare parts for rides and shows. 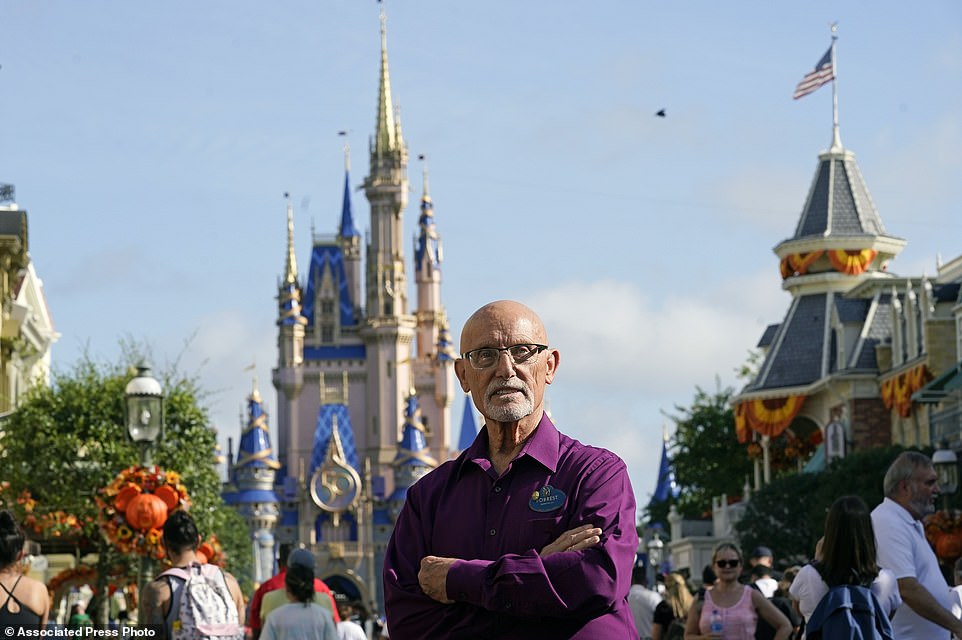 Forrest Bahruth (pictured) joined the workforce at Disney World in January 1971 as a show director, responsible for staging and choreographing parades and shows. He went on to spend the next 50 years helping open other Disney theme parks all over the world. He said he and his colleagues feel ‘privileged’ to still be doing jobs that they love. ‘There are people all over the world who get up to go work. They’re unhappy about it. They don’t really like their jobs,’ Bahruth said. ‘As you can tell from us, there’s an enthusiasm. We are privileged to be at a place where we love what we do.’ 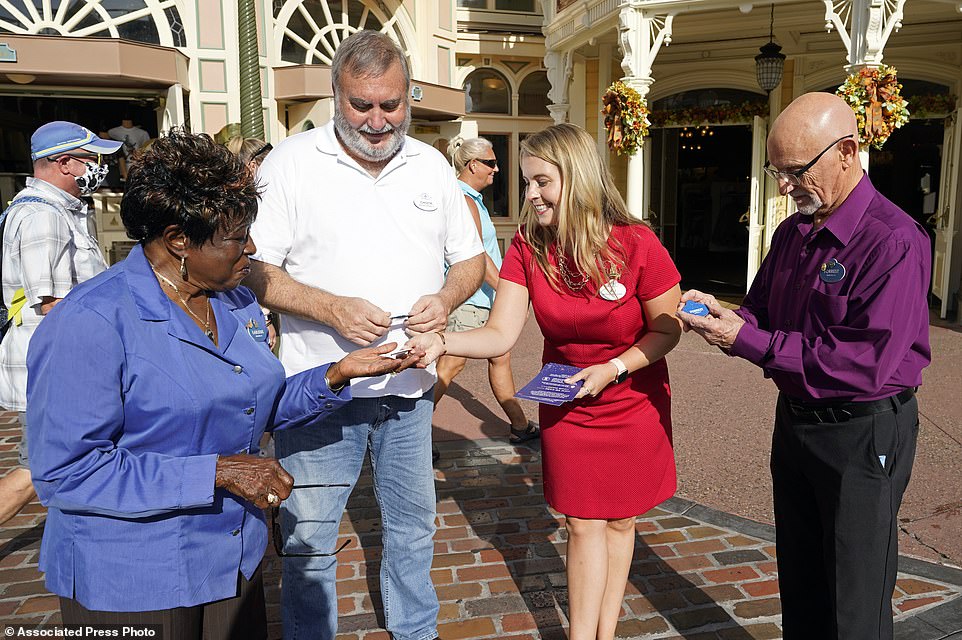 Two things have stuck in the memories of the longtime employees from that opening day, they said. The first was an iconic photo which captured the magic of that day. The second most memorable part of the day was the parade. Pictured: Walt Disney World Ambassador Ali Manion, second from right, presents special 50th Anniversary name tags to Anderson, Milam and Bahruth. 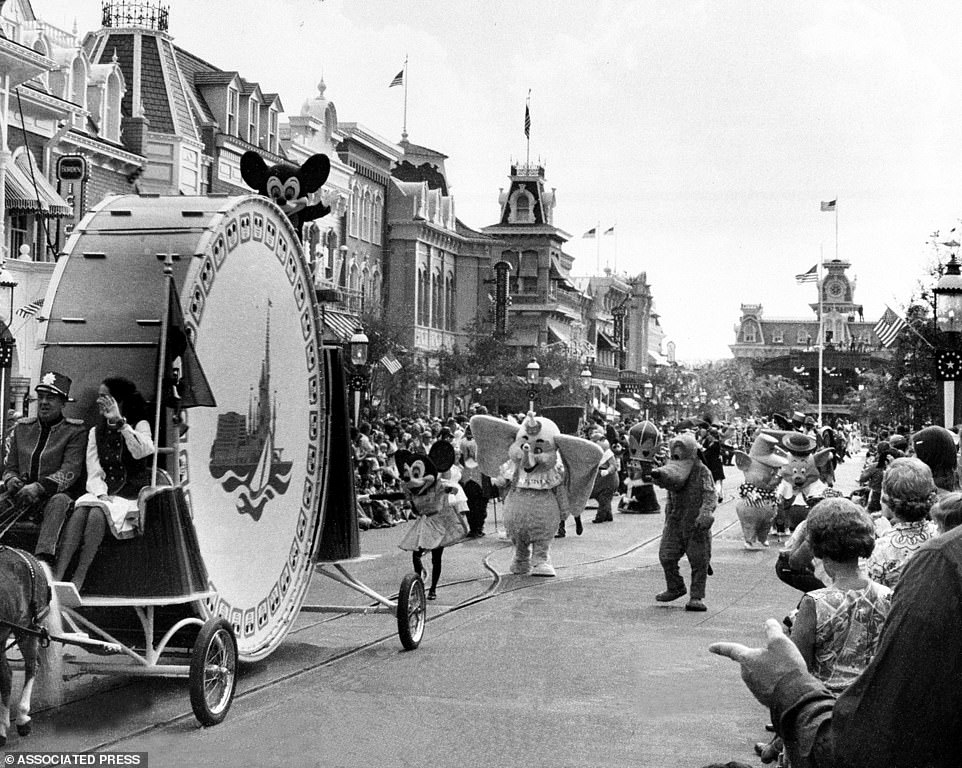 The parade featured a 1,076-member marching band conducted by Meredith Willson, the composer of the Broadway show, ‘The Music Man.’ There were 4,000 Disney entertainers marching through the theme park, a mass choir and trumpeters from the United States Army Band. Pictured: Characters, including Mickey Mouse and Dumbo, are seen in the parade at Walt Disney World during the grand opening ceremony on October 25, 1971. 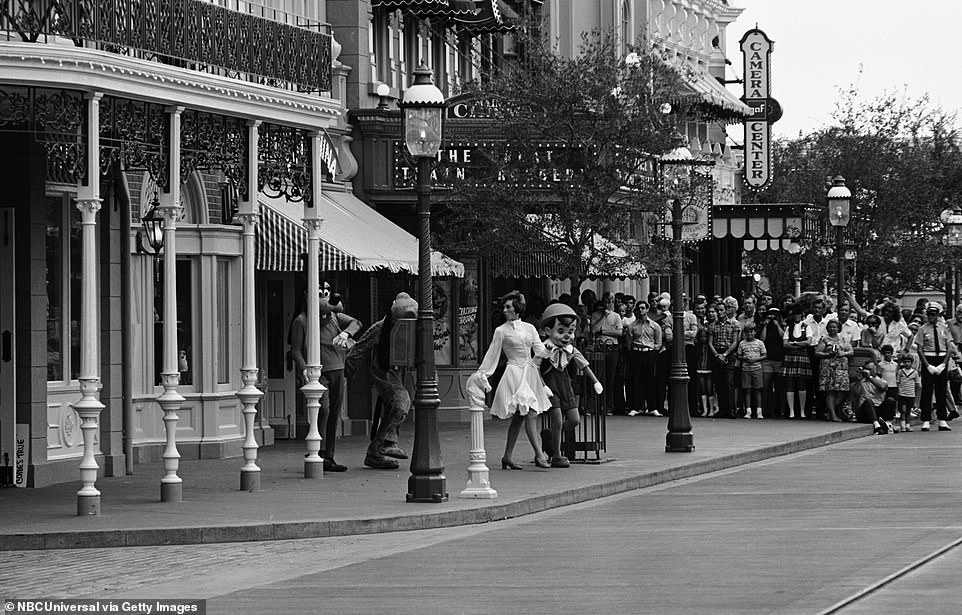 Hundreds of white doves were released into the air, and in a less environmentally friendly measure, so were thousands of multi-colored balloons. Pictured: Goofy, Pluto, Julie Andrews and Pinocchio are seen performing at Walt Disney World and Disneyland in October 25, 1971. 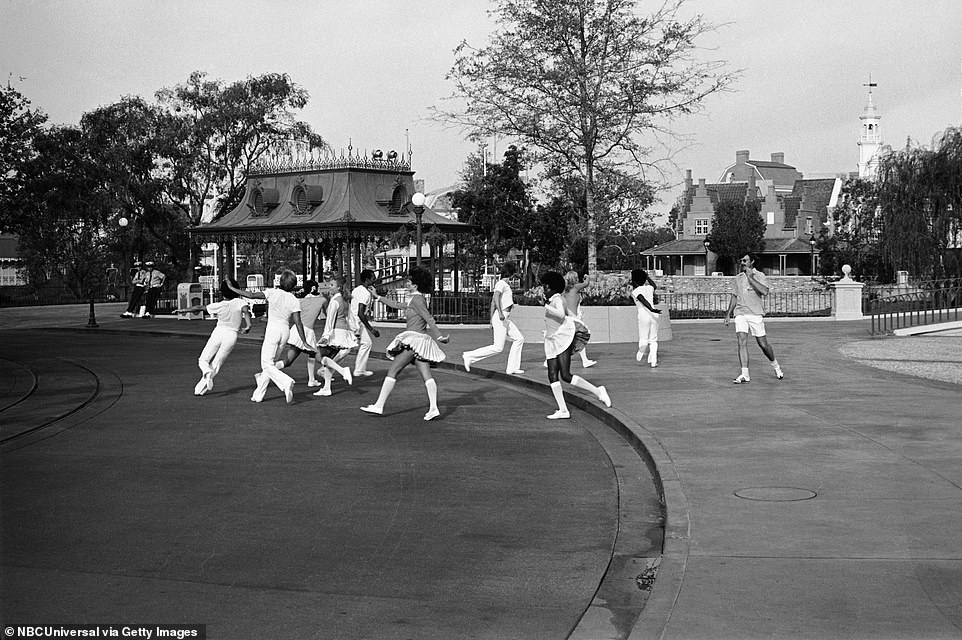 Dancers perform in Liberty Square of the Magic Kingdom at the opening ceremony of Walt Disney World and Disneyland. Only around 10,000 visitors showed up on that first day, which, at today’s much larger Walt Disney World, would represent about 90 minutes’ worth of visitors entering. 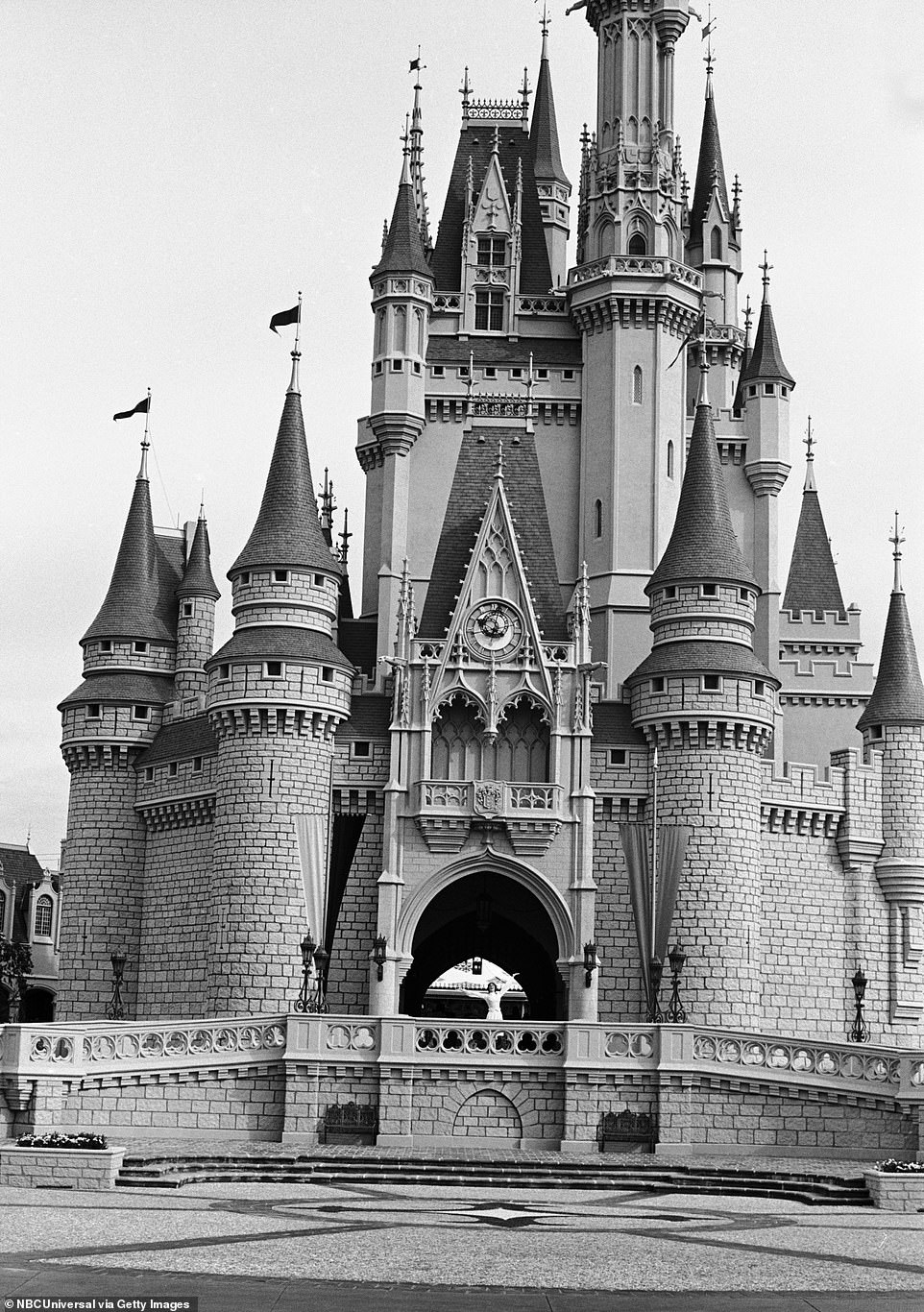 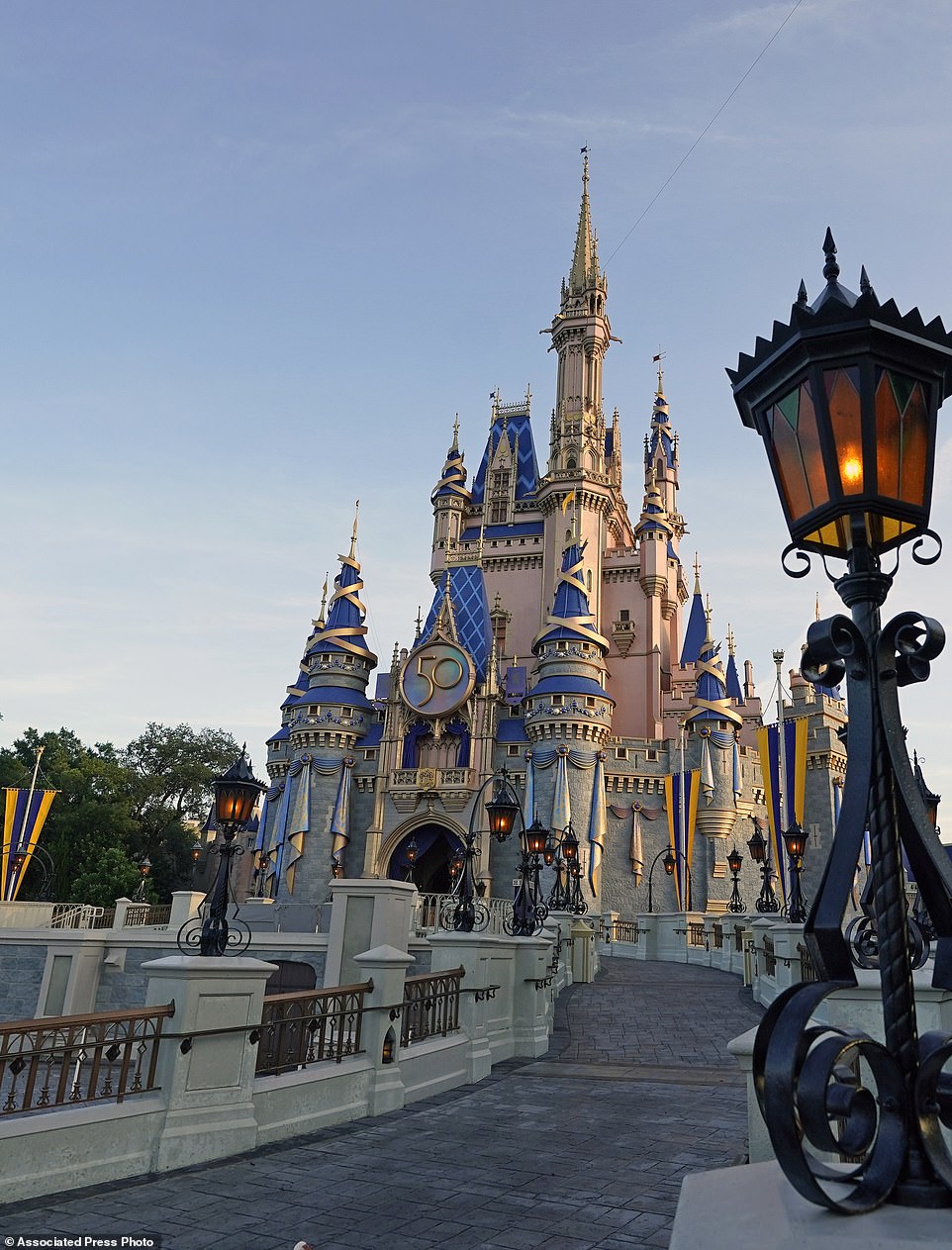 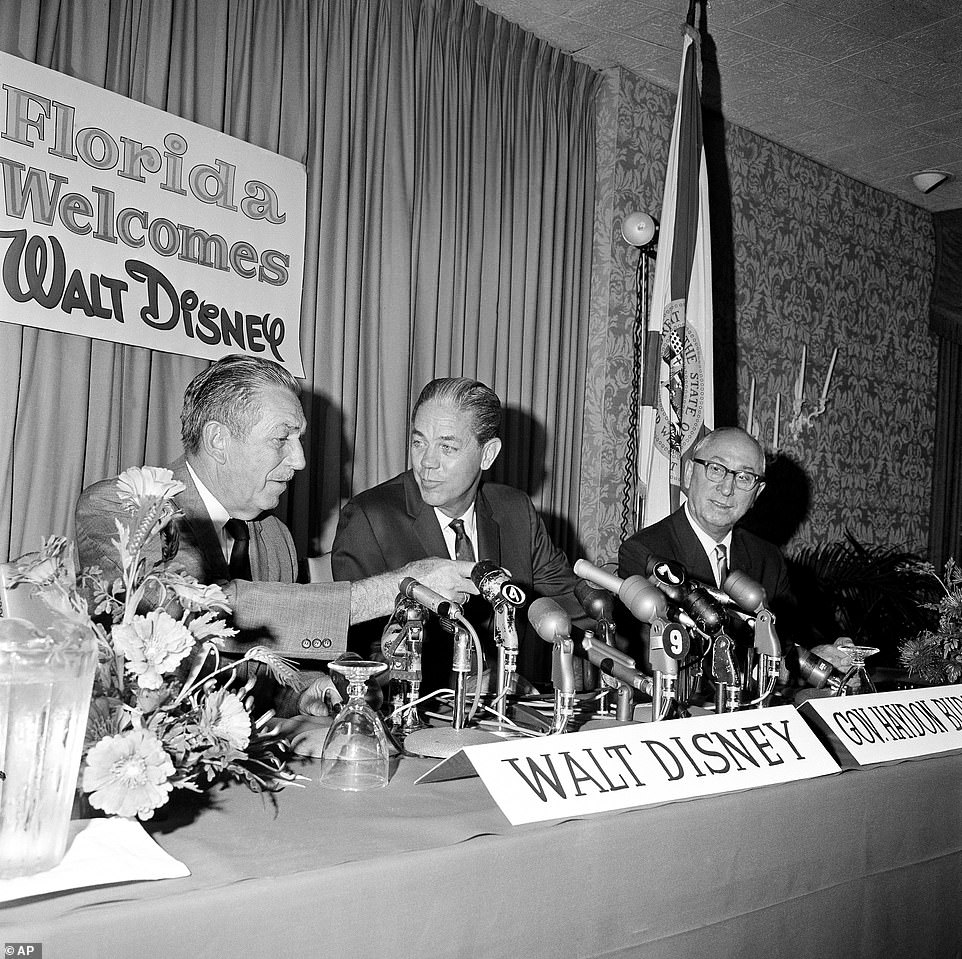 Walt Disney, Governor Haydon Burns and Roy Disney (left to right) at a press conference in Florida in November 1965 about the new park. Walt Disney reportedly grew irritated by the level of development that sprung up around his original Anaheim park in California, and secretly bought up huge swathes of Florida swampland to build a far larger resort where he could have complete control of its surroundings. 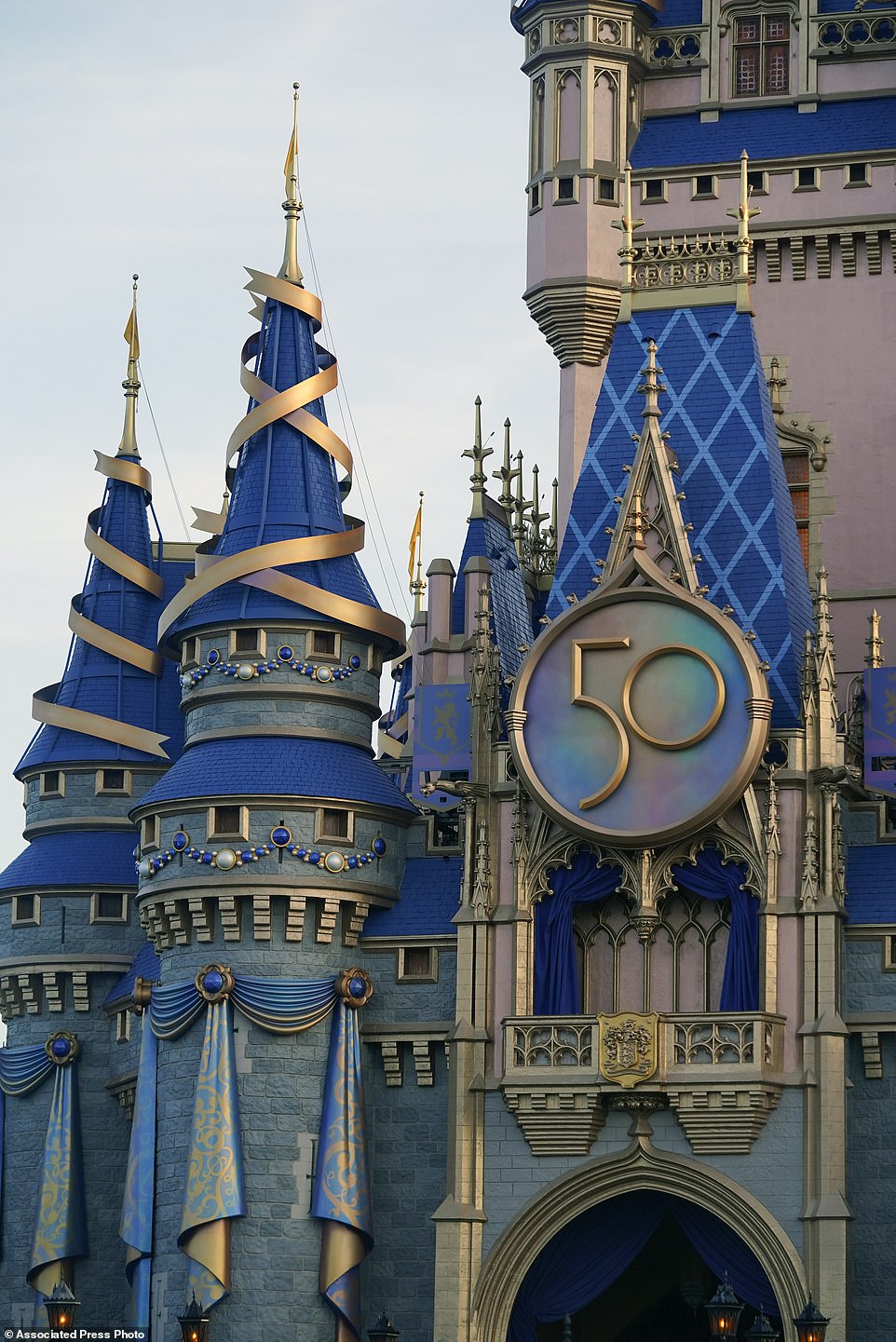 The newly painted Cinderella Castle at the Magic Kingdom at Walt Disney World is seen with the crest to celebrate the 50th anniversary of the theme park. Disney’s official 50th birthday on Friday is being marked with a party called ‘The World’s Most Magical Celebration’ – and its loyal workers are among the most excited.