Former ministerial adviser Brittany Higgins demanded sweeping changes to the laws protecting staffers in Parliament as she met Prime Minister Scott Morrison to personally tell him she didn’t want anyone else to go through what she had suffered.

Ms Higgins sparked a national conversation about the safety and treatment of women, especially in political environments, after she went public with allegations she was raped in March 2019 by a colleague in a ministerial office in Parliament House. 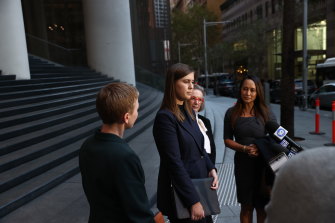 Former political staffer Brittany Higgins and Prime Minister Scott Morrison has agreed there needs to be change to how advisers are employed.Credit:Dominic Lorrimer

On Friday she met with Mr Morrison to outline changes she wants to the employment law covering staffers, known as the MOP(S) Act, and to advocate for an independent body to handle complaints relating to political workplaces and act as a “one-stop-shop” for human resources information.

Specifically, she wants the power removed for politicians to sack staffers on the spot or on the basis the MP or senator has lost trust or confidence in them – a clause she says is far too vague.

She told Mr Morrison she was driven by the desire to make sure “no other person would have to go through the trauma that I experienced” as a political staffer.

“For too long the culture of silence has allowed workplace bullying, harassment and other inappropriate conduct to go unchecked,” she told Mr Morrison.

Political advisers had very few protections or ways to address any workplace issues and that combined with the high-pressure environment had led too often to a toxic workplace culture, she said.

“It is my hope that this national discussion will translate into meaningful reform to ensure that this sort of behaviour is no longer tolerated. Cultural change is only achieved when we stand up and say ‘enough is enough’.”

Mr Morrison said after the meeting they were both determined to reform parliamentary workplaces.

“I am committed to achieving an independent process to deal with these difficult issues,” he said in a statement. “Ms Higgins’ views and experience will be invaluable to the work of [Sex Discrimination] Commissioner Kate Jenkins. I acknowledged her courage in coming forward and assisting in this work.” 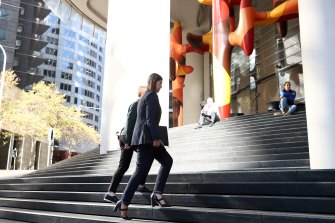 Brittany Higgins told Prime Minister Scott Morrison she was driven by a desire to make sure no other political staffer suffered the trauma she had.Credit:Dominic Lorrimer

Ms Higgins told reporters the Prime Minister ended in a place where he “fundamentally seemed to understand what had happened to me and how it was handled” and “acknowledged that the system had let me down”.

“We had a discussion about what needs to happen in terms of the MoP(S) Act, where there needs to be better safeguards for staffers where there are power dynamic issues in terms of parliamentarians and individual staffers,” she said.

“It was a difficult conversation, it was robust, but ultimately, in the end, I think there was a consensus that reform needs to happen.”

Stephanie Foster, a deputy secretary in the Prime Minister’s department, is reviewing existing processes for reporting and responding to serious incidents in Parliament House and what support is given to people who make complaints.

Her work is canvassing the practicality of establishing a human resources body specifically for parliamentary staff.

Ms Jenkins is reviewing the culture of parliamentary workplaces. She will report by November with an interim public update in July. Mr Morrison said he expected both reviews would make recommendations on establishing an independent complaints process.

Ms Higgins met with Opposition Leader Anthony Albanese earlier on Friday to discuss the same opportunities for change in the political system. Both said it had been constructive.

Mr Albanese said afterwards he believed the idea to establish an independent HR body was “modest and reasonable”.